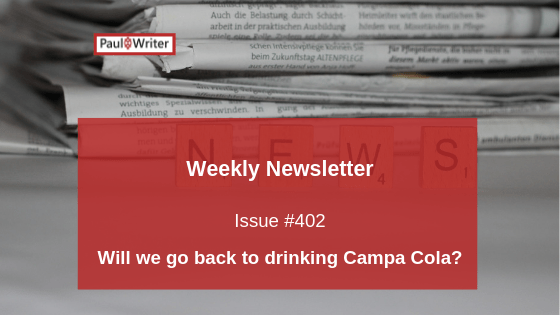 I grew up drinking Bovonto and Campa Cola. India had asked Coca Cola to leave because (among other things) they refused to share the secret formula.

It’s not just India – the US banned the export of supercomputers to India in the 80s, because it did not agree with its defence policies. In 2018, two supercomputers from India made the list of the world’s top 100 – an achievement that might not have happened if it had not been forced to build.

Self-sufficiency is a goal for many governments. Hence the desire to protect areas like health, pharma, defence, food, energy and ensure that there is a plan B in case they want to kick out someone either because they are not agreeing to their demands, or if, as in the case of Huawei, there is a perception that they may be giving preferential access to their parent government.

Why Retail is joining the ‘critical resource’ category is that supply chain matters to a lot of people – from farmers to traders to retailers to consumers. Many of them are suspicious of algorithms that are too complex to understand without a computer, and/or are not transparent. The Karnataka government banned Uber and Ola’s localised surge pricing pretty much for these reasons. It is quite possible that the government will ask for the secret search algorithms of Google, Amazon and Walmart. And it can only credibly do so if it has something to fill the void. And that’s why Mukesh Ambani’s desire to do online shopping matters.

It is puzzling as to why Flipkart was allowed to pass into foreign ownership if it was seen as a national asset. Certainly it built an eco-system of tech and supply chain partners who are all now likely to be marginalised. Moreover, Flipkart’s success helped create a brand for India in e-commerce from which all their partners benefited, particularly through sales to expand to other emerging economies.

Michael Porter discusses the importance of business clusters in his book – The Competitive Advantage of Nations. I’d say, rather than focus solely on the nationality of ownership of organizations, we need to also work on ensuring that we have the right business clusters and are producing enough global standard brands through this.

Once a year we launch the hunt for Hot Brands headquartered in various cities. This initative celebrates a diversity of brands, selected by a combination of popular voting, growth metrics and jury assessment – the Bangalore Hot Brand list will be unveiled during the Brand Summit on February 8th at Taj Vivanta, M G Road, Bangalore. I’m hosting a Masterclass on Personal Branding at 9.30am. Ping me if you’d like to reserve a seat – it’s filling fast! At 11 am we have a Masterclass by our co-host Adobe, and then the regular agenda from 2 pm.