Home Insights Blogs 📻Women as leaders are the same as men. Almost. 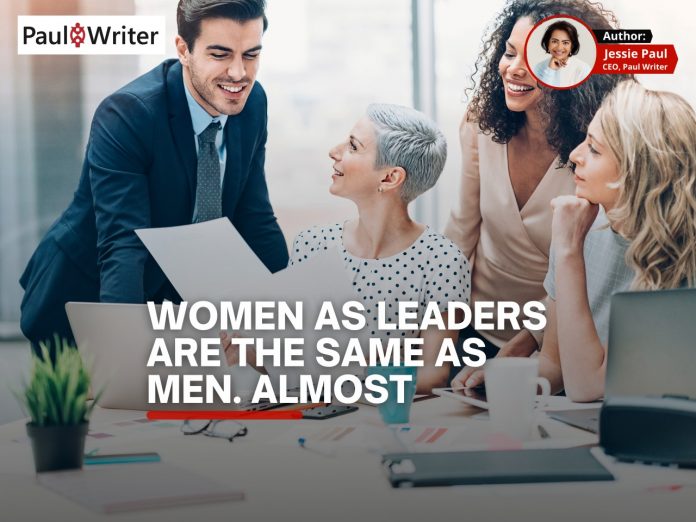 Women as leaders is a popular topic of discussion these days. And while it is true that the number of women as leaders has increased in recent years, there is still a long way to go before we reach gender parity. One of the biggest obstacles to achieving gender parity in leadership is the belief that there are such things as “women’s leadership styles.”

Women as leaders are softer

I used to cry in meetings. This was at Infosys in my late 20s. It all came flooding back when I saw one of my former bosses, Kris Gopalakrishnan at the Horasis India Meeting held in Vietnam. I was speaking on a panel titled “Female Leadership and Why We need it More than Ever”, and it made me think about what it had taken me to get from crying and/or shouting in meetings to being an Independent Director on the boards of 5 publicly listed companies, and of course founder of my own successful consulting business. (Spoiler alert: I no longer cry in meetings!)

There’s a reason why I was more likely to cry than the average man. My high school was all girls and traditional. We were taught that modest girls looked at their feet as they walked home. And dutifully averted their eyes from any men or boys who happened to look at them. Girls also were not expected to go out to public places unaccompanied. Or laugh showing their teeth. Crying was just fine though.

My engineering college – REC Trichy – was very progressive by current (or past) standards but still had a 10.30pm curfew for the female students. We had less time in the computer lab and library than the male students which, during assignments, was a definite handicap. It wasn’t until I joined Tata Elxsi after my engineering degree that I experienced anything like gender parity, though I still did not know the term. I was conditioned to defer to men – not by my family, but by the environment.

Do we need pink and blue leadership?

For too long, the business world has been divided between so-called “male” and “female” leadership styles. But the truth is, there is no such thing as women’s leadership. There are only leaders, period. And it’s high time we start embracing gender-neutral leadership in the workplace.

The Reykjavik Index for Leadership Research shows the difference in perceptions of men and women leaders in business and politics. This shapes our environment – whether we are viewed as candidates or not.

Leaders are made, not born is a new concept

The rise of the modern corporation has created a need for new, non-inheritable leaders. This has opened up a whole new world of opportunity for women to enter the workplace and take on leadership roles. However, the pool of potential women leaders is still smaller than men. And that’s because for all practical purposes we don’t actually live or work in the same world.

Our experience of the office or the corporate world is also shaped by all our prior experiences. If we have been conditioned all our lives to be “selfess,” “patient,” “sensitive,” “sincere,” “nurturing,” and “trustworthy,” chances are we will continue to be so in every situation, more so if we have also been rewarded in the past for these attributes. On the other hand if we have been rewarded for being “rugged,” “dominant,” “aggressive,” “selfish,” and “hard-working” then we will continue with this behaviour in every environment.

Modern leadership – as per research – requires attributes such as “plans for the future”, “expressive”, “reasonable”, “loyal”, “flexible”, “resilient”, “patient”, “intuitive”, “independent” and “analytical”. While you might associate many of these as ‘feminine” that is a result of conditioning and adoption levels of these values will rise once there is mass awareness that these are the attributes that will be rewarded not just socially, but also economically.

Saying women are inherently only good at a certain type of leadership is false and does a disservice to everyone. The pool of leadership roles is constrained for historical reasons. If we  dd a further qualifier that women are certain kinds of leaders, the pool shrinks even more.

So where are the leaders-who-happen-to-be-women?

One of my daughter’s names is in honour of Dr Kadambini Ganguly one of India’s first two women graduates, and one of India’s first medical doctors, back in the 1880s. Till the not so recent past, you had to see a doctor-who-was-male regardless of your gender. Most of us are now ok with seeing a doctor of any gender. And don’t think that a male doctor will be any less competent or caring than a female one.

The main reason there are less women leaders is the environment – the pool of women who enter any commercial activity and sustain in the face of the gender-related odds – is less than the number of men who do so. The women who do make it to leadership roles exhibit certain characteristics because of the environment and conditioning.

Just as we’ve stopped asking for “lady doctors” we need to stop (a) asking for women leaders and (b) provide leadership opportunities to the few women who are currently eligible.

We need to use affirmative action to balance things out. In the long run it will be of huge benefit in tapping into a more diverse pool of talent and boosting the economic growth.

For example, in India the government mandated that every board must have at least one woman independent director. This simple change has resulted in real progress in terms of gender equality in the corporate world.

It is a sensitive topic and one that has all kinds of nuances. All I can say is that one of the common considerations for giving a person a senior role is having held a similar role in the past. So if you’re recruiting a board director you want someone who has already been a director. If for historical reasons there are no women meeting that criteria- it’s chicken-and-egg. There are no lady directors to put on your board because there are no lady directors to choose from. When the government intervenes with a policy change that insists you have to have a director-who-identifies-as-female on your board, you relax the criteria and hire a first-timer. I am very grateful to Rajiv Kuchhal for introducing me to my first board, Expleo Solutions India. Out of the five boards on which I sit, there are other women on two of them, PB Fintech and CreditAccess Grameen. This is a key indicator that the choice of a board member is not by gender.

Or what makes women currently valuable in the workplace

We need to stop defining roles by gender if we ever want to see more leaders-who-are-women in the workforce. The first step is admitting that there is no such thing as a women’s leadership style. Once we understand this, we can start working on getting more women into positions of power so they can use their unique perspective to make positive changes for everyone. Have you experienced or witnessed bias against women leaders in your career? Let me know in the comments below.