The FIFA World Cup is the world’s most widely viewed sporting event. More than 3.2 billion people watched at least a minute of the World Cup live. The sporting event in South Africa was broadcast to 204 countries on 245 different channels and the numbers are going to soar. While television is the biggest driver to watch the games, social media will be the biggest platform of real-time conversation on the games, controversial decisions and fan madness. This time while the games are being played on the grounds of Brazil, fans will also be cheering round the clock on social networks such as Twitter and Facebook majorly.

When we say real time conversations on the web it equates to Twitter which has 225 million monthly active users. With more than a week of games gone by, Twitter is breaking records every day. The opening match between Brazil and Croatia witnessed more than 12.2 million tweets. Users from more than 150 countries have already joined in and with the games moving forward the conversations are only going to touch new heights.

During the last World Cup, Twitter was receiving more than 150K tweets per hour. This record, for sure, is going to be broken in the near future but will it break Twitter once again?

Twitter which has already been an epitome of real time conversations on the ongoing football world cup had a hard time to match the expectations of fans and save itself from ‘Fail Whale’ situations that it had encountered in 2010.

“As more people turn to Twitter to see what’s happening in the world (or in the World Cup), you may still see the whale when there are unprecedented spikes in traffic. For instance, during the World Cup tournament –and particularly during big, closely-watched matches (such as tomorrow’s match between England and the U.S.A.)– we anticipate a significant surge in activity on Twitter. While we are making every effort to prepare for that surge, the whale may surface.”

But four years since then, Twitter has changed a lot. The public listed company now has a goal to prevent a replay of 2010 events. In August 2013, the company blogged on how it has re-looked at its state of engineering and what were the findings. It was the same time when Twitter hit new tweets per second record of 143K tweets while the show Castle in the Sky was aired in Japan.

To get a better perspective of the engineering services FastCompany spoke to Raffi Krikorian who is one of Twitter’s main engineers. He helms a team (which encompasses approximately one third of Twitter’s software engineers) responsible for preventing outages and making sure the service is available.

“I’ve been here just shy of five years, and I still have PTSD from the last World Cup at Twitter,” Krikorian said. “When you come to my floor at Twitter headquarters, we have signs all over the floor with a countdown to the World Cup. Reliability is at the top of our minds, and reliability first is the mantra. Somewhere in the world, there is a sporting event, an election, or an earthquake.”

Krikorian, the vice president of platform engineering, further informed that the team is using worst-case scenarios of extremely high site traffic. “Twitter’s engineering problems are incredibly specific and difficult because they occur in real time.”

To overcome the problems Twitter has built its service model around real-time communication. FastCompany states that, Highlighting the challenges, Krikorian specified that Twitter faces engineering challenges on two fronts. While there is an ongoing transition for Twitter to support richer media, the network has to support emerging markets such as India, Brazil where a strong network infrastructure is a challenge.

“This means setting up a system of “shock absorbers”–redundant servers designed only for service when the network is extremely busy–around the world that kick in during extremely high traffic periods, and lots of planning at Twitter headquarters for different scenarios. Twitter performs tests to figure out which servers best serve specific users, and how to scale out their global server infrastructure to serve new markets.”

Simultaneously, Twitter has also focused on how it can be a platform of seamless conversations during the World Cup. The 140 character social network stated on its blog that the “the only real-time #WorldCup global viewing party will be on Twitter, where you can track all 64 matches, experience every goal and love every second, both on and off the pitch.”

This World Cup saw the return of hashtags with some more new features to keep users glued for a longer time on the network.

The network which has had a major change to its UI & UX to simplify the network recently, has used this for the sporting event. From informing on the login page to having a banner on the top of web and mobile, Twitter is trying to create the much required eye balls for the games. During this month, new users joining Twitter for the first time will get to choose their favorite team. This will allow users to have an option to choose number of profile and header photos that represent the supporting country. 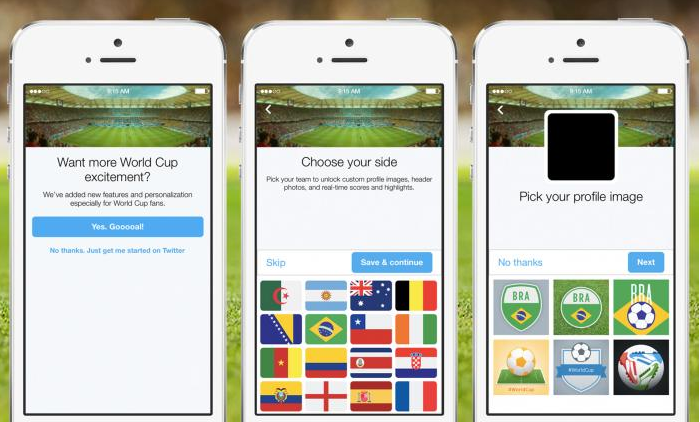 Twitter Trends are already dominated with the World Cup games, star players and controversies, Twitter has created a distinct panel on the right hand side to showcase the match results. “World Cup 2014″ or match timelines show the results of the game with a URL ‘View Match’. On Click you are taken to the associated hashtag which showcases content and conversations related to the game. 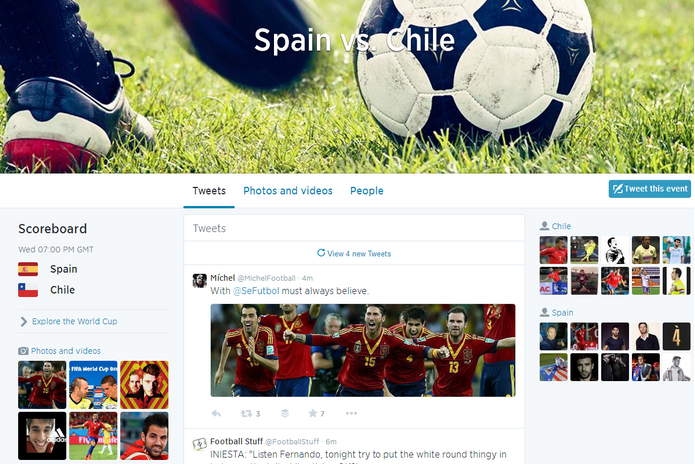 The above screen grab gives a glimpse of the Spain Vs Chile game, including rich media and players to be followed on Twitter from both the countries. That’s enough information even if you are not near to the TV!

Similarly there is another hashtag – World Cup 2014 which is the repository of all the conversations and content related to the entire World Cup. Tweets, Photos and video, and People are the main focus of the hashtags which has a similar experience on mobile too. 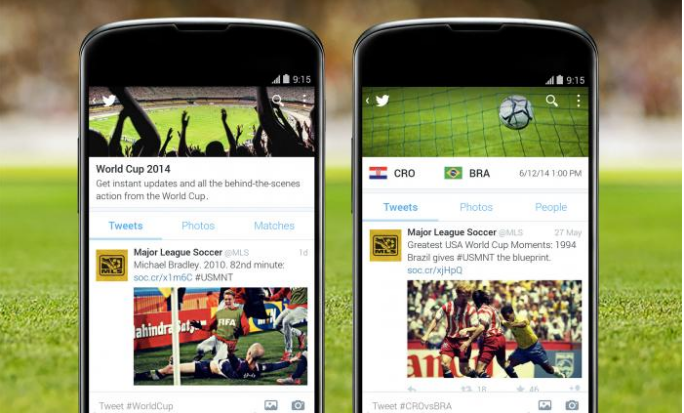 Hashflags that represent the colorful flags of the countries playing the world cup are back which were introduced in 2010. Users can type in three-letter relevant country code and the flag appears on the tweet giving more life to their tweets.

The concept of Hashflags have given rise to “World Cup of Tweets” which is curating tweets to see if the most mentioned team on Twitter wins the world cup. At present it looks impossible with the world champions Spain being out and host country Brazil is yet to have a desired run. In the coming days the fixture will change. 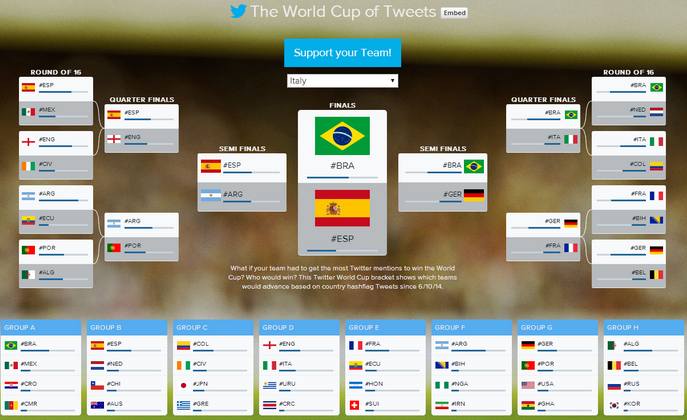 Social Data which makes Twitter as a rich platform has worked upon it and has been sharing interesting visuals. Initially Twitter has been the only source of raw data but not any more. Twitter Data, the Twitter account has stood up to the bio – official source for the latest data analysis and visualizations.

Measuring the total number of tweets, listing most mentioned players, key moments that drove conversations during a game and displaying them in an appealing way has been the job of Twitter Data. 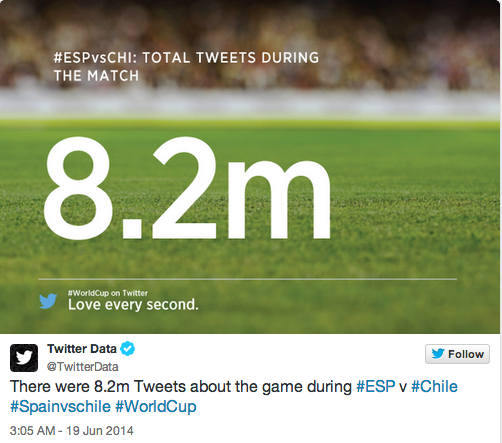 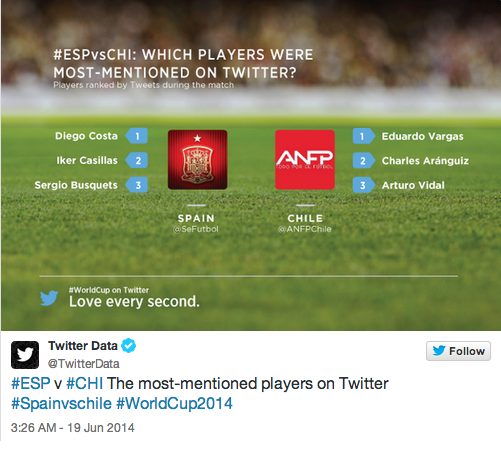 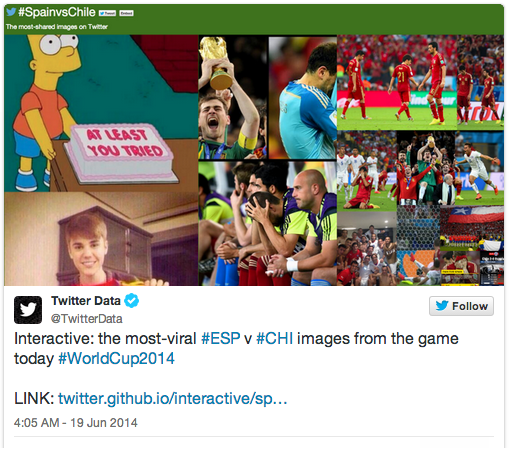 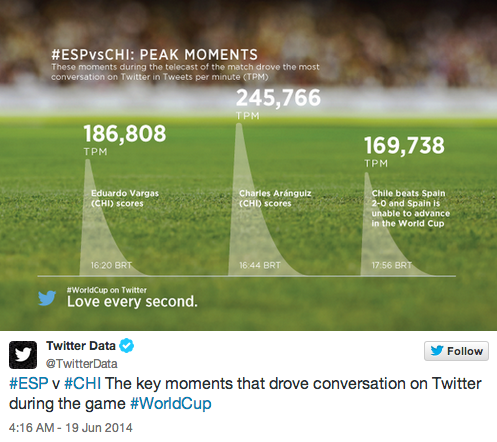 Not to forget the geo tagged heat maps that are created to show the places on the map which are driving conversations on Twitter. 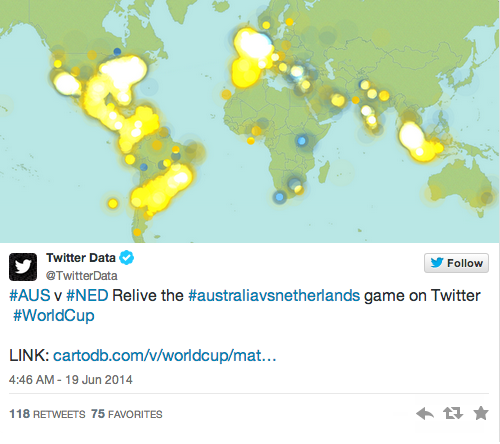 Visualization during this World Cup also extends to new heights with Twitter Reverb. The below tweet gives a glimpse of the visualization but the real magic happens when you click on the link provided with the tweet. Data becomes interactive with rich media content. With Twitter opening its gate for animated GIFs, Twitter Reverb will turn into a exciting fun space in the coming days. 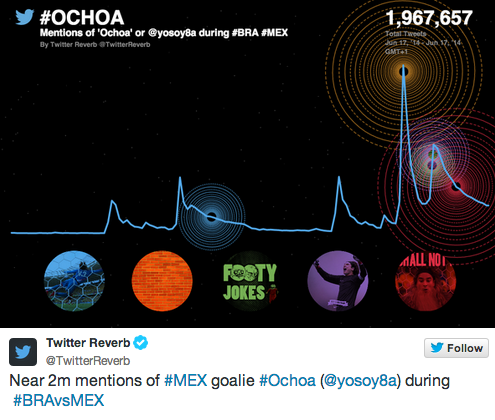 With first round of group games over, Twitter is yet to have any 2010 moments. Looks like Twitter has learnt lessons the hard way. Nevertheless, the required UI & UX changes, visualizing data for a common man are some great features added by Twitter to make the tournament a memorable one on the network, as it clearly justifies the platform to be the online carnival of football conversations.

This article is republished with permission.