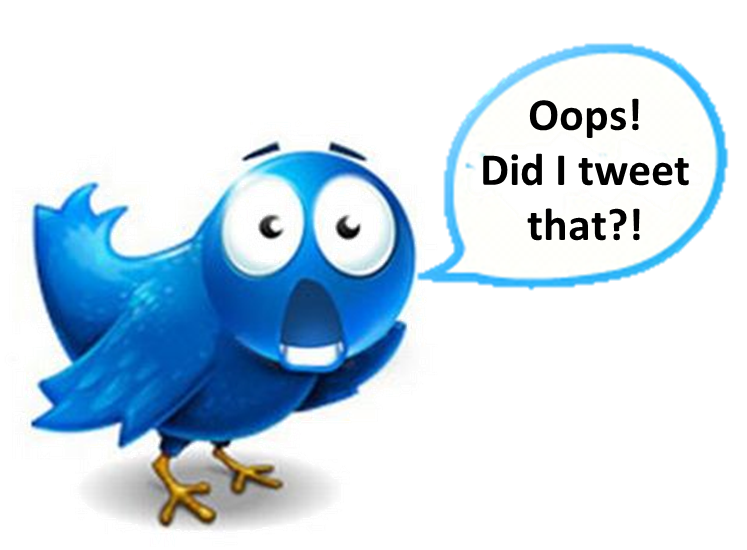 NDTV Goodtimes commits a social media blunder, and then justifies that its account was hacked. And then again retracts to modify its statement to say – “Ok. THAT happened,” referring to the blunder as something THAT happened. Here, we look at not how it could have been avoided but what is the best measure it could have taken post the blunder, and still retain the crown of being the ‘King of Good times’.

Mostly, we let go harmless social media bloopers committed by brands. We do not want interns to be fired or the brand to be pushed further into a vortex of sarcastic social media mocking. So, when this incident was reported to our team yesterday, we chose to ignore it as it appeared to be just another frustrated employee tweet. But, the manner in which NDTV handled it, makes for a good lesson for the brand itself and people observing social behaviour. 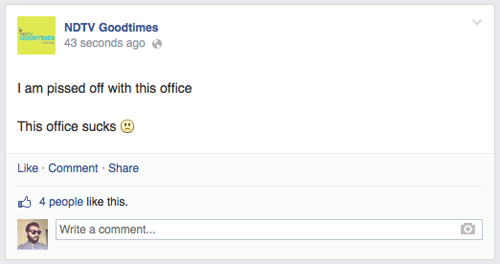 As expected, there were reactions – some funny, some sympathetic and some asking what’s the problem. You can check out this blog to see the reactions. As expected the brand chose to delete the erroneous post without issuing an apology. The matter would have died off had the next post not been as absurd: 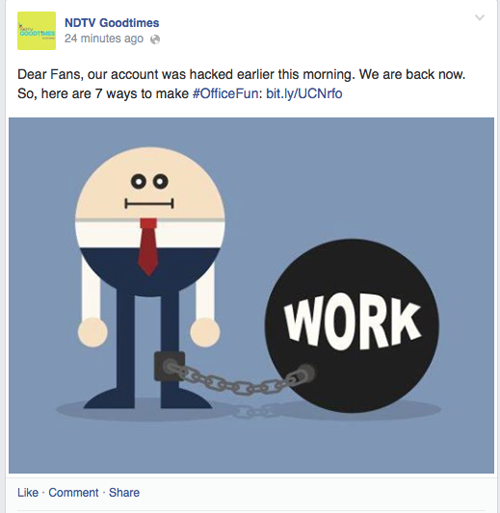 This post seems to have been deleted from both its Facebook and Twitter pages. We do not know what reactions it triggered on social media. But it is apparent that people did not take it too well. This ‘our account was hacked’ reason has been done to death. It does not work. It even took away the humour from the 7 ways to make office fun that NDTV Goodtimes shared along with it.

But, good sense prevailed soon. We do not know what transpired at the channel’s social media agency or the in-house social media department (whichever it is), a new tweet has been posted with the link to making office fun. It starts with an edgy ‘OK. THAT happened. Now that we have your attention.’

What we can learn from this unintentional blunder is that people don’t like excuses, just like it is in the real world. A brand would need to personify this on social media. A simple apology without any excuses would be just about good to go. But no apology, followed by a lame reason for the blunder is not cool at all.

Employees get pissed off with their workplaces all the time. So the making #OfficeFun article was very relevant and tongue-in-cheek. Kudos to NDTV Goodtimes for that!

Additionally, the post resonates perfectly well with the refreshed brand philosophy of #LiveYoung and validates the channel’s cooler, edgier avatar. Someone in charge of the brand voice brought it back on track. We only wish it hadn’t come up with the earlier lame reason though. Perhaps brand managers could prepare a list of pre-approved witty messages that resonate with the brand voice, for use in case of common bloopers like this. And not resort to last moment panic responses like ‘Our account was hacked’!

How In Two Years India Has Become One Of The Fastest...