LinkedIn is running a Pulse series where professionals share all the right – and wrong – ways to leave a job. This is a subject I have been reflecting on for over a year now as the realisation began to set in that I was approaching my sell-by date. Since LinkedIn has invited contributions to the series, here are my reasons to say #IQuit.

But first, I would like to thank Suze Orman for writing such an inspirational post. The part that specially resonated with me was her words, “Could I have ignored that feeling and just keep on keeping on?” Those words resonated because it echoed my state of mind for over a year before I took the plunge and informed my Managing Director that I needed to move on.

My reasons though were different from those of Suze Orman (link pasted at the end of this post for interested readers).

I first realised that I had crossed some sort of invisible age threshold when I found my energy flagging. Gone were the days when I could work 12 hours plus a day and finish up pending work over the weekend. I asked myself if it was because I had lost interest. I thought about it a lot and concluded ‘No’. The big reason was that age was beginning to tell.

Then, I thought and thought that I should just keep quiet and keep going to secure my income for another few years. Financial security, after all, was a big consideration. The sell-by date on a product is equal to an expiry date. Not so with human beings. One had no idea how many years of life were left to be lived. The savings I had would be enough for a simple life. Easy for me as I never did lead a high maintenance lifestyle. But I knew that the savings may not be enough to cover prolonged illnesses what with the extreme commercialisation of the health care industry.

The sell-by date on a product is equal to an expiry date. Not so with human beings.

I weighed the future risks and for a while made an effort to keep going. I told myself it was important if I wanted to avoid being dependent on family and friends. Maybe, the whole issue was only in my mind as no one in the organization seemed to have noticed my flagging energy.

Wait, correction. A couple of people had. These people were members of my team. Working directly with me, they couldn’t but help notice that something had changed. How could they not? I had become so short-tempered. Not with everyone. Just with two of my longest standing colleagues. Talk about taking people who you feel close to for granted. And talk about being unfair! Since I am writing about this, I would like to publicly thank these two colleagues for putting up with my short temper with the equanimity that I seemed to have lost. The colleagues in question are likely to read this and will know I am referring to them:) I think it’s important I mention here that I kept apologising to them. Maybe that helped just a little.

It was the inability to maintain my emotional equanimity that really began to weigh me down. Not only wasn’t it just not done in a corporate career but it also told me that something was changing in my physiological make-up. I am a diabetic. It’s inherited and I had ample experience of how diabetes affects personality. Could I conquer this ailment? That was the question!

The answer to that question also lay in the challenges I knew lay ahead for my organization, Sterling Holiday Resorts. And the responsibilities that I would have to shoulder if I were to pull my weight and help the company achieve its goals. We had been acquired by Fairfax Financial Holdings in February of 2014 and were going to merge with Thomas Cook (India). With such strong backing, exciting times lay ahead especially with the Narendra Modi government placing tourism squarely on centre stage in India’s development road map.

I had planned to retire from Sterling. I had hoped that I would do so on a career high after helping to build the Sterling brand into a clear leadership position. Sterling is well on the way there and I would have liked to lasted the course. But somethings, I guess, are just not meant to be.

I realised that I was slowing down too much and there was a real risk that I would end up disappointing myself and the organization. Best I take my own advice, covered in an earlier blog titled The thing about success!

These then are the reasons that I had to bring myself to say #IQuit. And oh, I have to mention that my doctors had begun to advice the same thing, telling me that I had to cut back – especially on the frequent business travel.

When I finally shared my thinking with my Managing Director, Ramesh Ramanathan, he was most understanding. We talked about my doing projects for Sterling to accommodate my changed life circumstances. But, I decided that I needed to spend some time just kicking back and maybe finally write that book I have been threatening to for a long time now!

Ramesh, today, I want to say something to you, which does not run the risk of being seen as sycophancy since I have put in my papers. If we could only bottle, brand and market your passion and spirit, all of humanity will be suffused with incredible energy and many more people would achieve their life’s goals.

Finally, I would like to say that I may not have fulfilled my ambition to leave Sterling on the kind of career high I had envisioned. But I have no regrets. It’s been an incredible journey working with Ramesh Ramanathan and a group of committed people to restore the company’s fortunes from a virtually bankrupt position to one of respectability.

That’s the thing, you see. I have said #IQuit a number of times in my career (around 7 times in a 35-year long career). Sometimes for the wrong reasons. This time, I believe, I have quit for the right ones. But I must say even when I had said, #IQuit, for the wrong reasons, I have no regrets. The trick is to just see your entire career (and life) as one long learning experience.

The trick is to just see your entire career (and life) as one long learning experience.

There are many people who I have learnt from and who went out of their way to help me. No post on my career can possibly be complete without acknowledging the role they played. I have listed them at the end of this post in alphabetical order (I hope to God my iffy memory does not leave anyone out and if I do, I hope they will forgive me – that’s one more reason why I recently said #IQuit).

Before I go, I just want to make one more confession. I hesitated in writing this post. What if financial circumstances compelled me to look for another job? Would this blog and the things I have said here be held against me? At that point, would people see that I could still add maybe much more value than a younger, healthier person? Would years of experience count? After all, more than ever, the world had turned into one big stage. Where everyone was engaged in projecting carefully cultivated images. Brings to my mind words I had seen pinned up on someone’s board years ago – The Truth is something, somebody, somewhere is trying to hide. Everything else is advertising.

The Truth is something, somebody, somewhere is trying to hide. Everything else is advertising.

All these thoughts ran across my mind’s screen. In the end, I decided to go ahead and write this post. So that the truth may be known as to why #IQuit. Also, that’s the beauty of growing old. You can say what you want because you no longer have that much to lose. Or, do you? Maybe, you do. Remember, more and more people are celebrating their centenaries. Will they feel valued? Will their pension plans suffice? Will they have to compete with not just younger people for jobs but with artificial intelligence (AI) as well?

In the end, the reasons for saying #IQuit may boil down to – can you afford to financially take the risk? This then is the BIG question. And it applies to all – young and old.

This blog was originally published on www.latawonders.com and the copyright owner is Lata Subramanian, the publisher of the post and blog site. 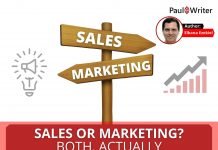 Sales OR Marketing? Both, actually 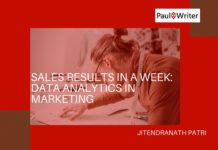 Sales Results in A Week: Data Analytics in Marketing