Home Insights Paris Hilton meets a Bored Ape: get the 90s back 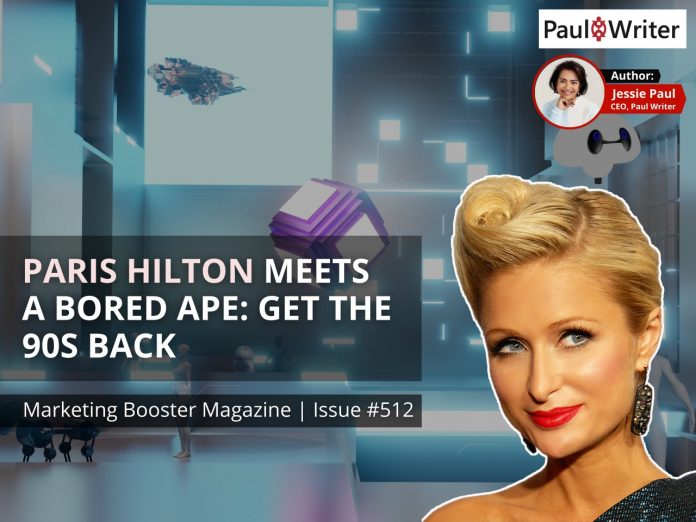 I saw a lady with a tiny dog in a handbag and pointed it out to the almost-teen daughter as a Paris Hilton clone. She was like “What’s the hotel got to do with it?” I had to explain that Paris was like a predecessor to the Kardashians for it to ring any bells for her.

Yet, Paris Hilton is scoring gigs in the metaverse. She played a DJ set this week at the virtual SXSW on The Sandbox metaverse. Very yo, no? She is also very relatable to Y2K kids who are decision makers today.

While the metaverse may conjure up a vision of gaming nerds, Gen Z, and super rich celebrities, big businesses are muscling in – HSBC just announced a partnership with Sandbox too, buying a piece of LAND. As a (snarky) aside, Paris Hilton probably resonates with the CMOs of these brands.

If you want a crash course into what The Sandbox is without actually signing up, here’s their intro video.

Frankly this “buying land in the metaverse” reminds me of good ole’ Second Life – the predecessor of the metaverse from 2003. At that time IBM even had a dress code for employees on SL and Wipro built a virtual campus. You’d imagine it was defunct, but nope, over a million active users with around 90,000 concurrent. I’m not entirely sure why it fizzled out from its peak. It is a virtual universe rather than a gaming platform like Roblox, so the cautionary tale that others can take from this is that there is only so much of “hanging out” that there is a market for. Sort of like how Facebook relies on exciting content for repeat visits, but there’s only so much excitement we can conjure up for baby photos and sourdough success.

But I think one of the key principles that brands – including the big kid on the block, formerly known as Facebook – might want to remember is that the metaverse or Web3 is supposed to drive a sense of community, empowering users to become members and govern and construct their own experiences. The next big thing in this Web3 vision is the Decentralised Autonomous Organization (DAO). It’s a self regulated community. And it can be pretty radical.

For example, Nadya Tolokonnikova of Pussy Riot set up @UkraineDAO to fundraise via NFT. The DAO allowed people to bid collectively on a Ukraine flag NFT, raised $7m in a few days and was able to distribute money really quickly. People in Russia could donate anonymously. “It’s a big step from crypto being seen as cartoon images that can be sold… we can solve global problems,” she said. Funds raised have crossed $63 million Read more (Of course the Russian government can use crypto to bypass sanctions too.)

While on the face of it buying a unique Bored Ape picture to put as your profile pic seems the equivalent of stamp collecting (we really are in the 90s!), it isn’t. Because buying that NFT gives you membership to the Bored Ape Yacht Club which is actually quite cool. Plus you get first dibs on other, er, stamps, like the Bored Ape Kennel Club.

At a recent sleepover (my daughter’s, not mine) we watched Mean Girls from 2004. I looked at the clothes and it was exactly what’s on sale in H&M! Y2K is so in – for a generation that wasn’t born when it actually happened. (December 31, 1999 was exciting – I was in the ‘control room’ at Infosys with journalists to prove that the cutover would be peaceful.) Room decor is termed ‘aesthetic’ when it looks like something from the 60s. Why?

Marketing Nostalgia: Based on Mindfulness:

There’s actually a reason for this revival of the past. One of the ways to deal with anxiety is to watch movies or read books with an assured happy ending. Or re-watch a movie so you know exactly what’s happening. (Hence the success of sequels.) In my book I talk about my work with Happiest Minds and Bhartiya City – both incorporated principles of mindfulness which say that you feel comfortable when you know exactly where you are going next.

What better way to foresee the ending than to travel back in time?

In these times of unpredictability and anxiety, marketers would do well to revisit the past. Relaunch “vintage” packaging, sign up ageing brand ambassadors and remix those jingles. In the digital world, give as much predictability as possible – super clear navigation and plenty of communication on what happens next.

Nostalgia can also help in a country where marketing skills and resources are trailing the demand from entrepreneurs. Repeating the past is easier than trying new things. In this book review in Outlook India, I talk about the marketing shortage.

In large parts of India (and the world) Holi celebrations are back with a bhang (get it?) after a break of two years.