Home Insights What is your native, Katrina? 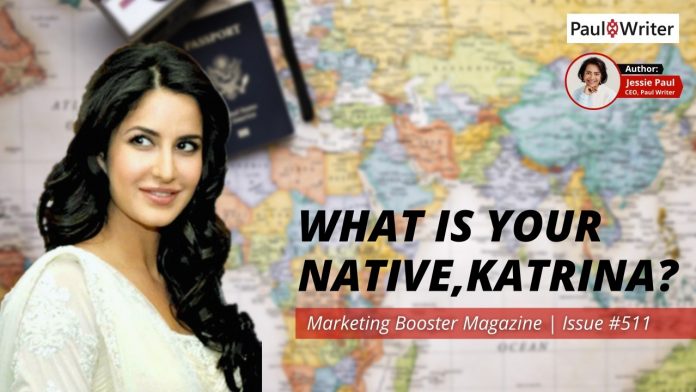 We know Katrina Kaif as a Bollywood actress and it’s easy to assume she holds an Indian passport. Actually she has a British one, as does Alia Bhatt. Akshay Kumar is Canadian, and Deepika Padukone is Indian though she was born in Denmark.

It’s nice to say you’re a global citizen, until it isn’t. When you’re stuck in the middle of a war, the passport you hold could mean the difference between life and death, depending on your country’s ability to organise your evacuation.

Or take the case of Charlotte Bellis a New Zealand citizen. She is famous as the Al Jazeera journalist who asked tough questions on women to the Taliban. She had to leave Qatar as she was expecting a baby with her (not married) partner which is illegal there. They moved to Belgium – his home country – because New Zealand’s COVID entry rules made it impossible for her to go there – but she had to leave after 3 months as that was the limit. She ended up in Afghanistan which was the other country for which she had a valid visa. New Zealand finally gave her a spot in their quarantine slot last month so she could go home.

In South India “what is your native” is a polite way to figure out which town you call home. Traditionally it was where you were born as mobility is a relatively modern phenomenon. Now you may be wondering why I’m writing like Simon Black of Sovereign Man. No worries this is still a legit marketing newsletter.

I’m discussing citizenship because it’s not just people – brands and companies have a nationality too. Despite claims to be global, companies are bound by the rules of the flag they fly. There are benefits and downsides to “belonging” to a country. French perfume has a monetary premium. As does Italian fashion. Indian IT is now a good association. Infosys, TCS and Wipro self-identified as Indian long before it was an upside, but Cognizant which started in the same era chose US citizenship.

You can choose your country of origin – by locating your headquarters there or by hiring a large number of employees from that country. It’s often confusing. For example, Accenture has announced that it is discontinuing its business in Russia where it had 2300 people. I’d initially imagined that this was because it was a US company and bound by the sanctions, but  Accenture is Irish, with headquarters in Dublin. They used to be headquartered in Bermuda earlier. So I’m speculating that they did this because they feel strongly about it, and a lot of their revenue comes from North America. (If you’d like to know more about country branding there’s a chapter in my book.)

Indian companies are not bound to take sides in this situation. But if your biggest clients and trading partners – McDonald’s, Disney, Papa John’s, 3M, Hilton, Microsoft, Netflix, Visa, Mastercard, BP, Shell, Zara, Heineken etc – are pulling out of Russia in some manner, you may have to consider your position independently. Uniqlo a Japanese retail firm is in the news for not pulling out of Russia. Will it be good or bad for their brand?

One of my favourite themes is that companies don’t have morals, people do. Companies adhere to the values imposed on them by their owners, employees, suppliers, and customers. Depending on the flags flown by these stakeholders they may have conflicting views on the current situation. Chinese owned brands are confronted by hard choices. Volvo AB has pulled out and TikTok has suspended its services. Others are still debating the conflicting merits of each stakeholder’s position.

As marketers we have to determine which is the wisest course of action to take that will not impact the brand and its identity. Country is an important element of that identity. The choice you make in a crisis can impact your authenticity for years.

Some of you may ask whether a brand MUST have a nationality. Legally, yes. But as we can see from the case of Accenture, country branding can be a marketing choice as well.

Vodka brands – most of them with no Russian connections – have been caught in the crossfire. Because they never actively communicated it.

Neutrality is also a brand choice, though in the current situation even the Swiss are taking sides. But whatever your chosen position, it is better to state it proactively than to have a nationality created for you.

This is my regular newsletter on its regular day – Thursday. If you’re wondering why you got two this week it’s because the earlier one was a Women’s Day Special. Though I ended up discussing vodka there too!

It’s also an excuse to catch you up on the latest writeup on my book, Marketing Without Money, in YourStory. Madanmohan Rao does a fabulous job of highlighting all the exciting bits of the book!

Have a great weekend!