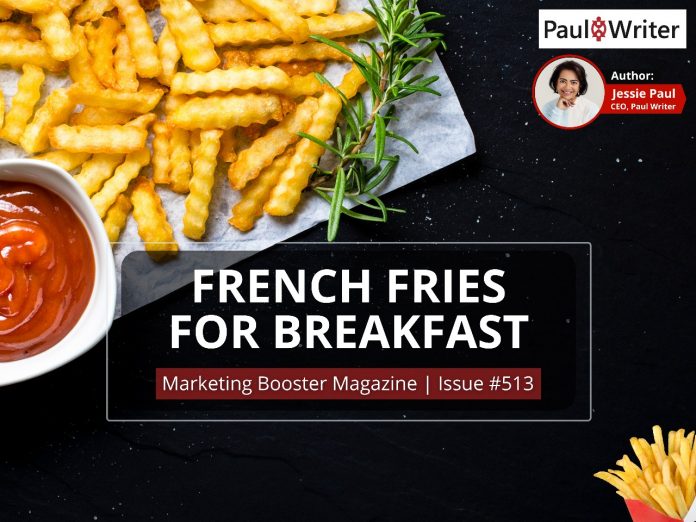 An air fryer is the best invention since, er, sliced bread. At least my daughter thinks so making French Fries in it for breakfast on a Sunday morning. But for most of us breakfast connotes breads or carbs of some sort – toast, dosa, paratha, croissant, or cereals. Why? Because we are conditioned to do so and certain brands have worked hard to own that time in our heads.

Bacon and eggs is a non-carb breakfast outlier and that was the victory of Edward Bernay a nephew of Sigmund Freud and considered the father of PR.

Say 4pm and many of us would think “tea time”. You might also possibly think of having it with a Marie Biscuit. (It’s named for the Grand Duchess Maria Alexandrovna of Russia).

Say 8pm and you might think of a drink, possibly a whisky (there’s a brand by that name in India with a classic ad to its credit.)

You could of course drink whisky at 4pm and tea at 8pm but it would feel odd.

Different parts of the day are owned in our heads by various brands and activities. Mostly with the active support of their marketing teams. But there are many spots of the day that are open, and and many brands that don’t own a particular time.

This line of thought was triggered by a recent report by Market Xcel titled BrandXcel, that I contributed to. The study is a deep dive into product categories and features the top 50 brands by Day Parts. It ranks the preference for personal care brands high in the mornings, food tech and delivery brands at noon and at night, e-commerce brands also in the noon, and OTT brands at night time. Using this report, brand owners could choose to capitalise on the time they already own or expand to other parts of the day.

In other news there’s Neu. Clever pun, eh? From the Tata’s it’s another attempt at becoming India’s SuperApp. I wrote about the race to be a superapp earlier and while the prize is juicy it’s a positioning conundrum given the huge number of brands operating under the umbrella. And as per early reports the app isn’t living up to the Neu expectations of user experience.

User experience is a huge and important space that seems rather ignored by many brands. For example, we recently moved and one of the biggest challenges is knowing what’s packed in the box before you open it. In today’s digital era it would make so much sense for the moving companies to have an app where you can view a photo of the items inside. Or an even simpler option where there’s a printout of the photo stuck on the box. Or how about a QR code that links to a video of the wardrobe being disassembled? Simple digital hacks that would prevent my current situation of wardrobes with parts missing, a table where the legs can’t be found, and opening every box in search of the elusive sheet for the bed. I can see why some people permanently move into a serviced apartment.

I think UX is the next big frontier and am thinking of starting a podcast where we discuss brand experience. What do you think? Would you listen in?

In happier news my book got a review in Adgully.