Home Insights Are you a child of scarcity? 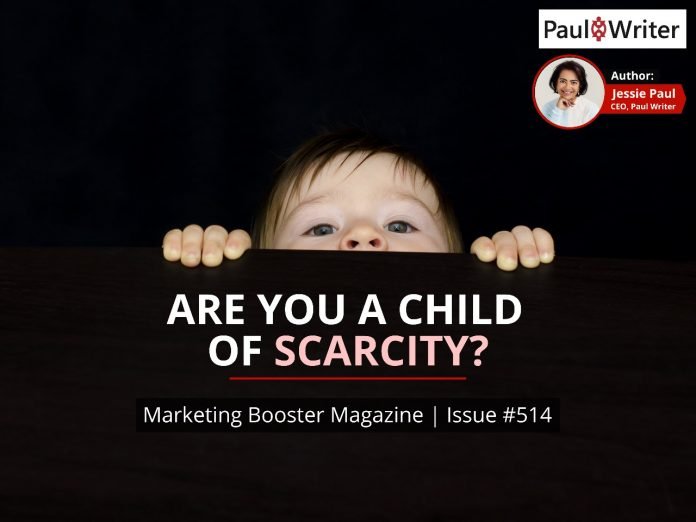 Growing up I remember receiving a colouring box or a packet of 12 markers for Christmas. And that was intended to last the year. Erasers were zealously guarded and the scented ones were a luxury.

It wasn’t that my parents were particularly careful – it’s just that these things were relatively expensive and considered a discretionary optional extra. Even paper was scarce. If you visit the museums of the famous painters you will see that they practised on any material they could.

My daughter loves to paint and one of her favourite techniques is to pour paint on a canvas and then shape it with a brush or just gravity. It requires quite a lot of paint. The results are lovely. This style of painting would not be possible for an artist who gets one box of 25ml paints per year. It is only possible for a child of abundance.

A child of abundance can use materials without fear of failure in the pursuit of her passion. A child of scarcity cannot. Often adults who grew up with scarcity retain that risk-averseness and fear of failure well after their economic circumstances have changed. They even try to enforce an artificial scarcity upon the children of abundance. (I catch myself saying “don’t waste paint” to a child who has litres of the stuff stashed in her ‘studio”. Exactly.)

I joined Infosys in 1998. Founded in 1981 they had been through some rough times but were doing rather well by then. They were ramping up marketing, and had just hosted their first customer forum – which itself was pretty radical for that time – at the Hilton in Minneapolis. I kept hearing that their aspirations were to be more like Accenture or IBM. For me, though I’d never been to the US, Hilton Minneapolis did not gel well with that aspiration. I felt that we had to show that we were as successful as these giants (they were probably 10x our size) if we wanted to be considered on par. Phaneesh Murthy and Nandan Nilekani agreed, and the next year we hosted the customer forum at The Waldorf Astoria, New York. Infosys successfully made the leap from being a ‘child of scarcity’ to ‘a child of abundance”. We were very careful with our spends – and I wrote about this in my first book, No Money Marketing – but what we did was of global quality, whether it was SETLabs for thought leadership or the Wharton Infosys Business Transformation Award.

In my consulting engagements I see organizations that are stuck in the mindset of scarcity when the need is to take risks, back those risks with investments, and think big. And they can afford to do so. Moreover, if you don’t invest in your brand or growth when the margins can support it, over a period of time your margins will drop and you will be forced to be careful. Scarcity thinking is great at certain points but when you continue that in an environment of abundance you hobble yourself. Taking the train when you can afford airfare might be cost-effective, but your time could be used better perhaps? Similarly if it makes financial sense to build your brand, invest in people, buy inorganic growth – why hang back? (On the flip side, I also see companies that have moved from their period of abundance to one of scarcity, but still applying the mindset of abundance to their depleting resources.)

In last week’s newsletter French Fries for Breakfast, I discussed MarketXcel’s Brand Study which highlights how mature brands are being replaced in customer mindshare by new age ones. This can only happen if the old brands don’t adapt. For the last two days I’ve been playing with our new robot – Roborock S7. It’s a part of Xiaomi’s ecological chain and a good way for them to stay relevant. Erstwhile vacuum leaders need to reconsider their position as the world moves towards automatic cleaning.

In our 30s my husband and I were fond of driving. It was a big moment for us when we decided that we could afford to keep the Airconditioning on ALL THE TIME! For you children of abundance, there was a time when Airconditioning was an optional extra on cars, and most people didn’t switch it on except on the hottest days of summer. If you can afford it, why not enjoy some of the fruits of abundance without guilt?

As a business, one of the biggest tests that you have transitioned from the scarcity mindset to one of abundance is the ability to say no to business because it doesn’t fit your strategy. Infosys famously walked away from GE which was a substantial client because the rates did not make business sense any more.

Today’s topic was triggered by something that popped into my inbox yesterday. Vikram and Veer Sagar, kids of friends-who-are-family are hosting a fundraiser this weekend in Bangalore. The causes are (a) scaling empathy starting with launching his first school in rural India and (b) sustainable fashion, including launching his own fashion label. These interests are – in my view – only possible for those with an abundance mindset. They may of course lead to financial rewards, but then again they may not. Changing my scarcity mindset to appreciate this shift is a parental struggle for me and I really respect those who have achieved it. Check out their fundraiser.

But the concept of children of scarcity vs children of abundance is an ongoing conversation initiated by another friend, Ravi Venkatesam, whose a-ha moment was his daughter losing yet another eraser. As he put it, he could easily afford to give her one every day and yet he was repeating what his parents had said to him in the era of scarcity.

We have a long weekend coming up! Today is also Tamil New Year and I wish you all abundance in the year ahead. Happy Easter to those who celebrate it.