Home Insights Sima Aunty and the evolution of PR 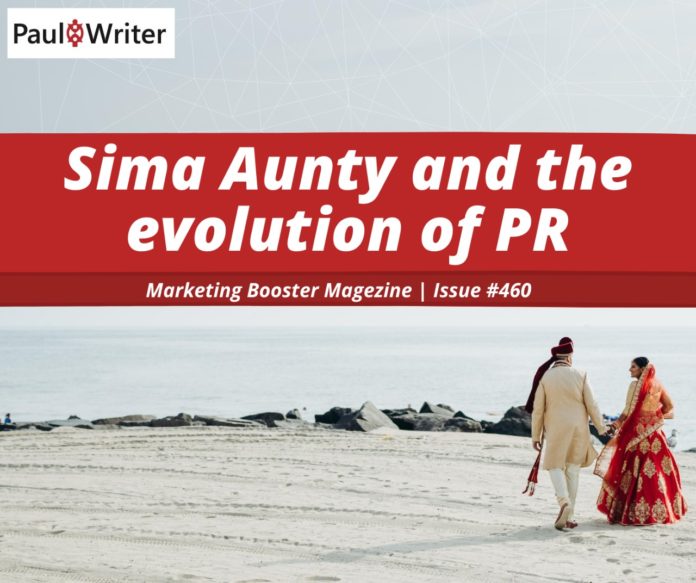 I’ve been on a two week break that included, amongst other things, watching Indian Matchmaking on Netflix. Sima Taparia, the matchmaker and protagonist of this reality show introduces herself as “Mumbai’s top matchmaker”. As a cynical marketer one wonders how she has acquired this title. But she is now famous enough to have a “sima taparia roast’ instagram filter that tells you what she would say about you. Given the viral success of the show, would she be rolling in offers? I mean, isn’t a Netflix show the PR dream of any consultant?

PR has traditionally had two roles – reach and credibility. The reach was delivered by the circulation of the publication providing you with coverage. And credibility came from a reputed 3rd party saying that you were indeed awesome. Today, with media fragmentation, reach for many publications has shrunk. Many publications are still credible but they are not necessarily those with the biggest circulation. So for a successful PR strategy you may have to look at more frequency and more publications than you would have say 10 years ago.

But as I explain in my PR 101 session, PR or ‘earned media’ requires good, newsworthy content. You have to be interesting. For example, Whitehat Jr which in 18 months of existence has managed to get bought by Byju’s for $300 million has a powerful marketing engine. It got good PR for, amongst other things, a Silicon Valley Programme which would have seen 6 kids from India go to the US to pitch their ideas to Silicon Valley VCs. Getting coverage in mainstream publications certainly makes parents more likely to consider paying up.

Back to Sima Aunty. Her website does not mention the Netflix series. Could it be (spoiler alert!) because of the success rate of the individuals featured? The other thing is that her model is not scalable and requires her to be actively involved. So even if she were deluged by anxious parents seeking to marry off their choosy children, she could only accept the same number of clients as before, though she could of course up her rates if she could prove that her product is now more successful.

One of the questions that keeps coming up is whether PR is an essential component of a marketing strategy. No, it isn’t. Not for everyone. It delivers reach and credibility, but both can be achieved by other marketing tools. If your existing PR efforts are not working, then maybe, like Sima Taparia, you need to relook at the content and er, adjust.

As I watch absolutely no traditional TV, I get my information mostly from groups on Facebook and Whatsapp. Credible because these are gated groups, word of mouth is really powerful. I do cross-check some of the information on google before putting it into use. The tussle over TikTok shows how powerful social media really is – governments now consider these as strategic tools. And they would not do so if they were not aware of their power in influencing our thinking. I grew up reading Soviet Woman, a magazine published by the erstwhile USSR which was designed to propagate the Soviet world view, and listening to BBC Radio. The US has benefited greatly from the “America is Awesome’ messaging of popular media.  Social media is the new radio and governments want a piece of it. Who would have thought social media would graduate from being the place to host your baby photos to being a geopolitical pawn.

This space is still in flux and as marketers we need to be aware that the rules are changing constantly and derisk accordingly. For example, till recently I was able to download my contacts from LinkedIn. Now, unless your contact has explicitly given permission for their email id to be downloaded, you cannot. So you can stay in touch only through LinkedIn. Which is great for LinkedIn but leaves you dependent on them. On an unrelated note, if Microsoft succeeds in acquiring TikTok US – which is a great idea as then they will then have an entry into the new cool space – it will be interesting to see how they integrate it with LinkedIn. We will literally have to sing for our supper 🙂

Meanwhile, my recommendation to high engagement brands is to think digital. For a cousin’s birthday I wanted to send something special. And I remembered a friend’s sari boutique – Prakriti – in Kolkata because she has been doing Facebook live videos of her collection. She was able to share video recordings of the selected saris and reach them to the cousin in time. The selection was curated on Whatsapp. No phone calls required. Oh sure, I missed the tea and mishti I would have had if shopping in person, but this was a great experience of “assisted ecommerce’. Is this possible for big brands? Yes, if their sales teams are empowered. I have a great Whatsapp relationship with the sales team at Lawrence & Mayo, who keep me updated on new offers and enable frame selection through images shared. Perhaps this is the way forward for high involvement products?

The COVID lockdown has led to a lot of introspection amongst brands on areas like colourism, gender discrimination and sexism. A lot of it has to do with the language we use and I found it interesting that a real estate association in the US has advocated against the use of “master bedroom” re-designating it as “primary bedroom”. I had never really thought about this phrase so popular with real estate sites, but it makes sense. As the parent of a 11-year old girl I also have to deal with her questions on these accepted norms. She has just watched the full Lord of the Rings Trilogy and while she loved the story her big question was why the women did not go to battle. She would like someone to do to a sequel to the movie with a more gender balanced approach to the wars. Netflix and Prime, are you listening?

2 Rules for Marketing in a Downturn, Job Survival Tactics and Quiz

Amul atta? Buttermilk from Coca Cola? Ready-to-drink RoohAfza? There’s been a spate of product launches recently each more adventurous than the next. And I’m not even talking about the clutch of companies now producing hand sanitizer. Or the raft of “immunity enablers” like turmeric milk from food companies.

PR SURVEY – AGENCY VIEW
Introducing the Red Book of PR. It’s hard to pick the agency that is best for you. Because your success depends a lot on the team, their domain expertise and fit.  As an agency it is not easy to stand out for the capabilities you have.  So we’re building a comprehensive view of What PR Agencies can do for client, and what clients want from PR Agencies.