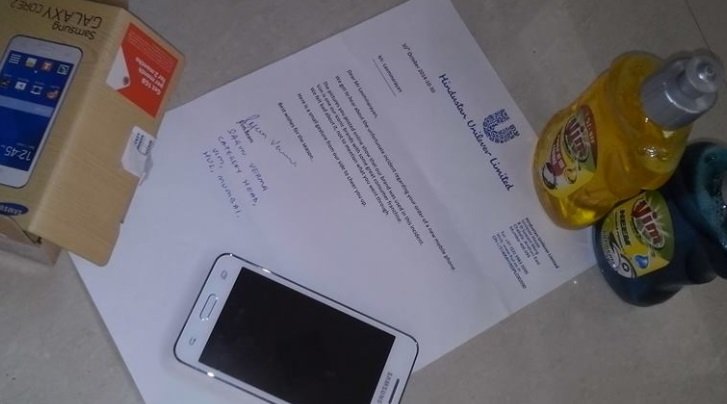 Diwali and gifting go hand in hand but not for this husband who wanted to gift a Samsung Core Duo smartphone to his wife. Availing one of the tempting deals on the Diwali bumper sale by etailer Snapdeal, Laxminarayan Krishnamurthy, a Mumbai resident had ordered the Samsung smartphone for his wife. But what he received instead was a bar of Vim soap, the iconic Indian dishwashing soap bar by Hindustan Unilever, that if advertisement script writers are to be believed, actually turn any of your vessels into a mirror.

His wife wasn’t impressed though, a dishwashing soap at the price of a smartphone isn’t the best Diwali gift you can have even if it makes your dirty vessels squeaky clean and reflective. A grieving Krishnamurthy contacted Snapdeal but received no response at all.

So Krishnamurthy took to social media, an ordinary man’s weapon to fight injustice as well as ecommerce frauds.

In a Facebook post dated October 24, he shared the picture of the Vim bar he received inside a Samsung Core Duo carton. The ordinary man with 94 Facebook friends received over 20K shares on this post, making it a viral wave on social media. Many online news sites picked this up for its sheer sensationalism quotient.

Meanwhile, Snapdeal who could no more afford to wait and watch, refunded Krishnamurthy the full amount. The delighted man updated this in a Facebook post dated October 31 while attributing the good news to the power of social media websites like ‘FB’. He said that the Snapdeal media in-charge contacted him through phone and apologized for the goof up.

In the post, Krishnamurthy also listed all the suggestions he has made to Snapdeal and what the ecommerce company assured as their next points of action. For a fast growing ecommerce site that recently got a $627 million funding from Japan’s SoftBank, and planning on becoming the ‘Alibaba’ of India, Snapdeal did good by refunding his money.

However, what happened next is a first in the Indian social media space. The soap company HUL which despite not having played the central character in the viral story, found itself being dragged into an ecommerce fraud story. The Vim bar in a Samsung carton image had become the talking point on social media.

So, Hindustan Unilever decided to do a little ‘chance pe dance’ by reaching out to Krishnamurthy and cheering him up with a small gift – a brand new Samsung core duo!

The super delighted Krishnamurthy put up a new Facebook post on November 1 thanking HUL as he could now gift his wife the phone. Not only that, he also received some Vim liquid soap bottles along with the Samsung phone. This post has received close to 70 shares and is being picked up again by the online news sites. The Snapdeal soapdeal has become a HUL big deal!

Receiving soap instead of a phone isn’t an unusual news in a country with e-commerce sites springing up in every corner, but this is probably a first when a brand has leveraged a viral social media story to generate some positive branding. Kudos to HUL for making this happen in India!