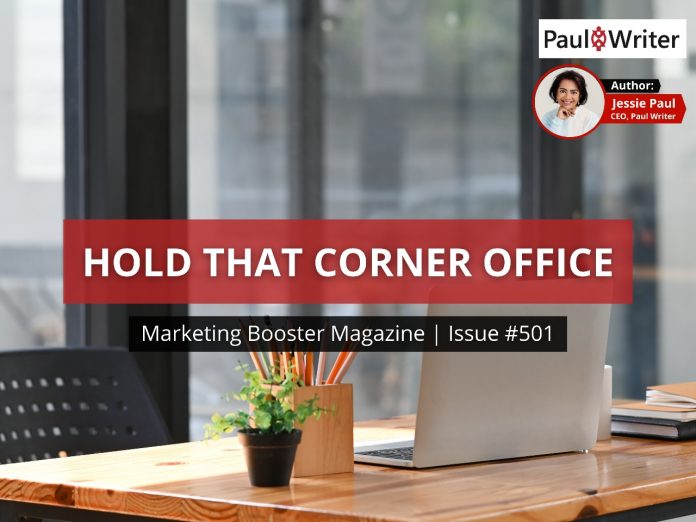 When I quit Infosys to join a start-up, Quintant, as head of marketing, I was super excited to get a cabin! Woohoo! I really liked my new colleagues too – some of the most brilliant people I’ve ever worked with – including many former colleagues for that sense of continuity.

Launching a new brand was a thrill in itself, of course, but the workplace and non-work interactions had a lot to do with the overall experience.

Yesterday I moderated an ET Edge panel on the topic of motivation and managing for retention with HR and tech experts from Perfetti Van Miele, Kelloggs, Bajaj Allianz, Happiest Minds, AWS and Xoxoday. It got me thinking about why, where and how we work.

Not everyone has been working from home for the past 18 months – production units have been producing, chefs have been cooking, nurses have been nursing and so on. But amongst the others “The Great Return” is causing mixed feelings just like the “The Great Work From Home” did back in 2020. Some of us are rooted to our fancy ergonomic chairs, ring lights, and laptops and have built a social eco-system outside the workplace. We have adapted our work relationships and business models to a point where proximity is not a requirement for performance. Many businesses – and individuals like me – have thrived financially and even wellbeing-wise in this new normal.

Insisting that everyone return to work could be the call of nostalgia. To a simpler era when your birthday meant you got to cut a cake with the team, Fridays meant free pizza, and the office was your social club. It also might disguise the fact that company loyalty was based on “surround factors” and not core. (Read here – the difference between core and surround branding). Where you did it and how you did it masked the mundane reality of what you did. We didn’t question it because that was how things have always been.

But many people are asking deeper questions.

The purpose of working is to achieve financial independence. Financial independence can be reached sooner if you reduce your costs – the pandemic has allowed people to do so by moving to cheaper locations, sharing homes with parents, eliminating travel, and homeschooling. Some enterprising folks have embraced the gig economy supplementing their salaried income with gigs – and thereby getting closer to being independent of their salary.
Pre-pandemic a higher or middle income household spent over 30% of its money on housing, with the higher income people spending another 20% on transport. If you have free housing and you have no commute, you can live on way less than you did before as many discovered during the pandemic. Without offices consumption of apparel and footwear shrank too.

If the basic needs of Maslow’s hierarchy are covered, you start looking at esteem and self-actualisation. Now the content of your work and how you are treated matters a lot more. All the paraphernalia of a glitzy office and office friendships can’t hide the absence of these two. Thinking that a return to office will reduce attrition without more systemic changes is wishful thinking.

And this is where organizations need to relook at their motivational tools. For the ET Edge panel I did some research and some of the discoveries were surprising, at least for me, so I thought I’d share them with you.

Discovery 1: People want to be respected as individuals.

Yeah, I know, sounds like a no-brainer. But how does one put this into practice?

There was a cool field test carried out at Wipro BPO. In an onboarding experiment, researchers randomly assigned new hires to one of three different welcome sessions. The first prompted people to reflect on how their unique perspectives could help them succeed in their new roles, another asked them to think about why they were proud to join the company, and the third focused on skills training. After six months, employees in the first group were less likely to have quit and delivered higher customer satisfaction scores.

Discovery 2: Recognition for everyone doesn’t work. We’re not in kindergarten.