Gillette is in the eye of a social media storm. For, ahem, saying that toxic masculinity is a bad thing. In the midst of the brouhaha over their 2019 ad- the crux of which seems to be that it unfairly generalizes men and also wants them to be what is considered in old-fashioned terms a wimp – there’s a significant shift. Gillette has moved from “The Best A Man Can Get” – which was about their product to “The Best A Man Can Be” which is an improvement program for the user that their product in no way enables. 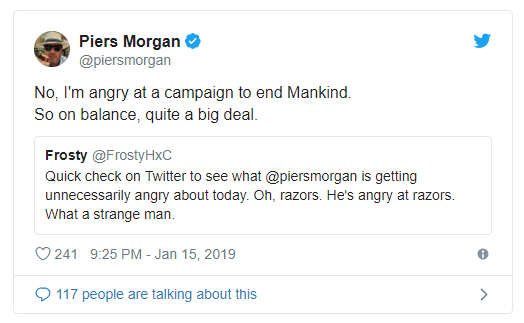 Famous English journalist Piers Morgan criticized the ad, boycotting the brand because he felt the campaign was trying to end mankind. He was joined by many others who felt personally attacked by the stance Gillette was trying to take.

Marketing Week’s Mark Ritson too took to reviewing the ad, labeling it “the year’s worst marketing move” as it fell into the brand purpose trap. Ritson also brought up a major flaw in the ad: “That’s the one thing you won’t see much of in Gillette’s new ad: razors. Among all the sanctimonious hectoring and evil masculinity on display in the ad there is very little room for any reference to shaving or Gillette.”

The ad does begin on a dark note, talking about the many sexual charges that have come out over the last few years, it goes on to shed light on the men who are holding each other accountable.

It’s a big shift in narrative from the traditional male targeted ads like this one from Nivea, even if the brand is probably trying to cash in on the #metoo movement.

Let’s take a quick look at some of the popular shaving brands’ ads that have either followed or attempted to break the stereotypes in the ad industry:

With an inclusive cast that includes Michael Dubin, Founder and CEO, Dollar Shave Club the ad portrays men and women getting ready, at their most vulnerable yet also manages to retain the trademark humour. From a man taking a bubble bath, a woman shaving off her hair, to a transgender shaving their leg, the ad does not shy away from depicting that getting ready is not as glamorous as ads and movies may make it look.

Featuring Terry Crews who last year came out with his #metoo story the Old Spice ads aim at being humorous, and follows their tagline of “Be a Man.” While the Old Spice ads share a similarity with Axe ads- infamous for their objectification of women-  the narrative is more humorous and light-hearted in its approach.

A competitor of Gillette, Harry’s last year released a short film that talked about what it was like to be a man. The narrative discussed how men had to be brave, had to take care of themselves, had to shave- but then goes on to say there was no one way to be a man.

Two sides to every story 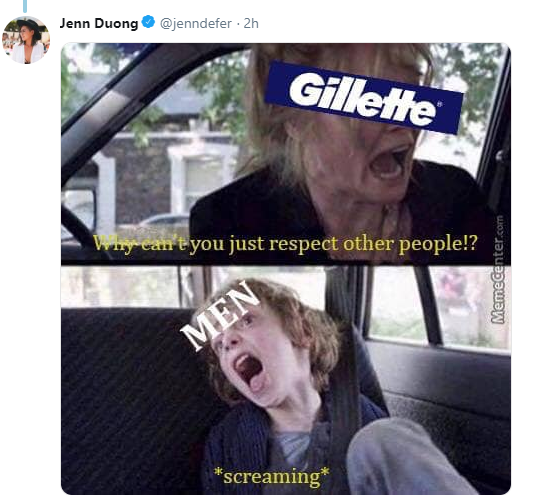 Gillette’s ad has gone viral with the digital citizens reacting in different ways.

There’s no denying that the brand is leveraging the trending #metoo movement for their own benefit. However, that’s what advertising is- talking to your audience about what they’re taking about too, finding common ground with them.

Many of Gillette’s customers have decided to stop using their products, using the hastag #BoycottGillette. These customers have cited the ad as lumping all men as bad, endangering the traditional values of masculinity and isolating a majority of their target customers.

The ads of the past are often criticized now as being sexist, objectifying women and promoting gender roles- however it can be said that they reflected the atmosphere of the time. In the present, with conversations on previously tabooed subjects and attempts to break stereotypes, it’s only right for the advertisement industry to reflect the changes being made in society. The ones who adopt faster might get criticized but in retrospect they will be the first of many who break free from the mould to create different narratives.

Thoughts? Let us know in the comments!