Speaking to 20000 people, knowing that over a billion would be tuned in, is a tough act.

By acing this, Narendra Modi and his team delivered a master class in PR over the weekend. Here are 12 lessons / observations:

The Build Up – the art of perfect showmanship and the importance of crafting a perfect frame for the performance.

1. Blitzkrieg set up – A big splash in PR is usually executed as a series of increasingly bigger splashes. Modi’s team executed a rolling thunder to perfection. Prior to his Madison Square Garden debut, he had blogged for WSJ, met 2 local mayors, addressed the United Nations in New York, made an appearance at the Global Citizens festival at Central Park, visited the 9/11 memorial and held talks with 3 heads of state. All within 36 hours prior to his big speech. Talk about a set up!

2. Perfect Power pose – Good speakers radiate powerful psychological and physical body language. Walking into Madison Square Garden, Modi had an enviable week or two behind him to pump it up. He made the Chinese premier look fairly weak over the border fracas. Score! Then, India’s Mars mission went into orbit and Modi played it to perfection all through. Such a setup must have done wonders to the teams’ confidence and Modi’s ’56 inch chest’

3. Signaling the agenda – As any SaaS company will attest, good design and web presence is essential to good positioning. Just before Modi travelled to US, he launched ‘Make in India’ arguably India’s best executed digital web asset. Even a casual visitor would do a double take around the crispness of the agenda laid out in the site. For me, this site was a clear signal of intent from the marketing team behind the brand. Modi followed up the web launch with a perfect campaign mindset – great coverage and inbound links, rousing speeches and YouTube videos and double booked meeting schedules with F500 CEOs.

4. Signalling contrast – Marketing teams live and die by differentiation. Modi’s team did a fabulous job in setting up a sharp contrast between Modi and his predecessor, a strategy they used exceedingly well to clinch Delhi. While MMS was, well MMS, Modi knows how to capitalize on photos, videos and handshakes before flashlights. While Modi masks gave him massive brand presence physically in Indian heartlands, that drumming session in Japan gave him equal digital swag. Even before setting foot in the US, Modi had managed to establish who he was, what he stood for and why was he different.

The Downbeat – the music before the curtain raises in Broadway, designed to create a nervous frenzy 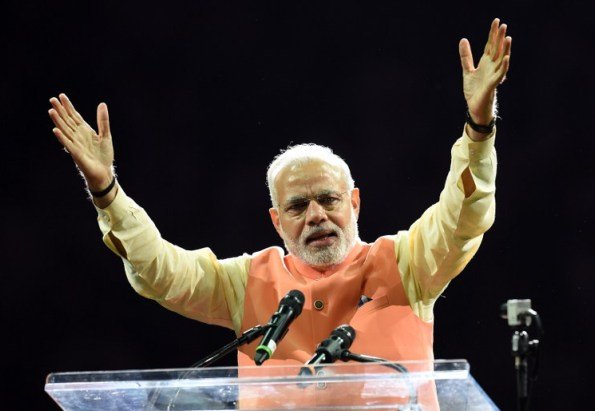 6. The light goes dim – Before the real show started at Madison Square Garden, the team put in an hour of cover shows. Starting off with ‘Born in the U.S.A’, it hit its Indian stride with peppy Gujarati and Rajasthani staples, setting the mood before launching to a higher crescendo with India’s national anthem. And cleverly, it had something for everyone – managing to cover local demographics, tugging at the heart of NYC’s large Indian ethnic groups and ending it on a perfect pitch. If you were sitting inside, wired with anticipation, the ‘cultural program’ would have left you engaged and high on energy. Perfect cue music for the main show of the day. It’s uncanny how this set up is similar to annual conferences – high energy rock and roll before the CEO takes stage.

7. The Animated banner ad – But there is no Modi yet. Instead, we get 30 more minutes of Bollywood songs and impressive Punjabi-marriage-scale choreography ! De rigueur for most Indian shows but wait, there is this one guy on stage, vigorously painting a poster of Modi while all this is going on. By design or happenstance, it looks more like Obama’s iconic Hope poster created by Shepard Fairey. Brilliant brand association, instantly establishing the ‘he stands for Hope’ and ‘they are both challengers, appearing from nowhere’ narratives. Three people in the crowd faint instantly. 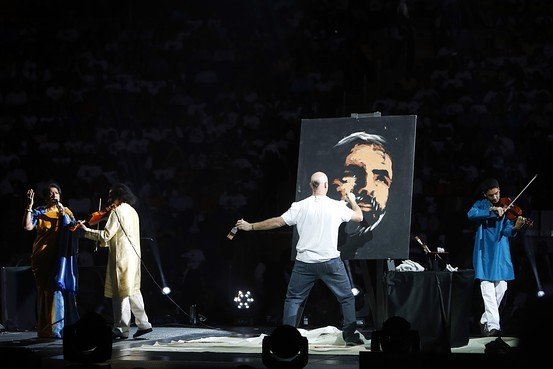 8. An orchestrated introduction – Despite having 4 master of ceremonies at stage, including a news anchor, an actor and a former Miss America, Modi’s formal introduction was done through a video reel, the deep voice of the narrator introducing him as “A man of innovation, a man of action, a leader with a heart. Narendra Modi, global vision, Indian soul.” As most beleaguered brand managers will tell you, either you take personal control of your key messaging, or else someone is going to insert their personal messaging.

9. The first 45 seconds – It blew me away. He executes 3 power moves in the first 45 seconds : Modi starts off with ‘Bharat Mata ki…” and looks into the crowd to complete his sentence. Talk about instant connection. The crowd goes ‘Jai’ multiple times, but he doesn’t accept the reaction and start his speech. He continues to look around, glaring at the back rows. Till ‘Modi. Modi. Modi’ chants break out. The crowd is not only eating out of his hands but breaking out into cheerleading chants in the first 30 seconds.

Then he does something amazing with his opening sentence. He ad libs Swami Vivekananda’s opening lines from 1893, delivered at the Parliament of World’s religion. The crowd gets it, connects with the insider reference and roars with appreciation. This is copybook, Grade A storytelling – letting the audience in, challenging them to respond to the storyteller and making the audience feel super smart. All accomplished within 45 seconds. After this, he gets the audience to give him an ovation at will. I counted a collective clap, every 15 seconds till the 60th minute.

10. Choice of word – Someone analyzed Modi’s speech and made a very telling word cloud. ‘Bhaiyon aur beheno’ (brothers and sisters) make up the default space fillers for Indian politicians and Modi used a lot of ‘country’ and ‘India’ to set up the broader connect in New York, as one would expect. However, what’s unique is the heavy dependence on ‘forward’, ‘move’, ‘want’ and ‘take’ – strong action verbs signaling strong intent. I had expected to hear a lot on development, poverty, welfare – the standard stock of Indian political speech but Modi surprised us with a strong forward thinking, action verb laden vocabulary. It underlines the sense of conviction with which he delivered his message and the choice of key words reinforced the ‘let’s get it done’ slant in his philosophy. Persuasive marketing copy often follow similar principles – weeding out ‘apple pie’ words and honing in on strong action oriented vocabulary to increase conversion.

11. The closing – The big difference between professors and politicians is the political leader’s ability to rouse and incite action. While Modi’s speech was exceedingly cogent (more on this after the break), he delivered marketing nirvana with what happened after he left the stage. 10 whole minutes after he closed out on his vision for India, he made the audience sit through a video on river clean up. Weird as it may sound, it is a fantastic marketing endgame. With the audience inspired to take action, he expertly channels the collective energy to a specific outcome. Speak of conversion rate optimization for a brand activated audience!

12. Anatomy of his storytelling – Wise men, seasoned men, good marketing men (men, as in humen), are masters of arguments and persuasion through storytelling. Aristotle even made up a fancy Greek word for it – rhetoric. Modi followed an incredibly similar path to what the wise man once taught me about speaking to 1, 10 or 100 people.

a. Ethos/ Spirit to connect – Modi invites the audience to chant with him 5-6 times during the speech. It is a great way to get individuals to fall in line with the spirit of the moment. He put a lot of himself (“I was a poor man”, “haven’t taken a vacation of even 15 minutes”), his personal background (“Sometimes people ask me for my big vision and I tell them, I have reached here selling tea”.) out there. By revealing his personal side, he lets the audience build a deeply personal connect.

b. Pathos/ Emotion to connect – Modi is a master of emotional connection. Though he barely smiles or gets teary eyed, he speaks with such conviction that it is hard to look away. He adds to this ‘sense of mission’ feeling by adding jokes and narratives (“I went to Taiwan and told the snake & mouse joke”) that subtly lay out an emotional common ground for the audience and himself. I loved this line – “I will not do anything that lets you down”. He delivers with clenched fist, uses 3 hard negatives to stress on a promise. This is uncannily similar to the double negative tactic Upworth uses to Growthack traffic.

c. Logos/ Logic to connect at scale – Modi has some favorite logical argument that he often draws from. While not a numbers person, he stitches facts well enough to come across as very logically sound. His point about India’s youth dividend, sewage in Ganges, outsourcing nursing training etc. are well made with stories, arguments and some numbers. Generally though, he barely uses numbers to swing opinion on matters but he masterfully deploys numbers to close/ validate his argument. Here is a line that draws on all 3 forms of rhetoric “I have a dream that in 2022, when India completes 75 years as an independent nation, there will be no family in India without a house to stay in.” – a class act.
Great work, brand Modi !