Home Insights Blogs When Advertising Is Just A Waste Of Money

Watching the recent cricket test match between India and England on TV in India, I was staggered at the level of advertising repetition I experienced. During one hour, I decided to keep track of the commercials aired. The brands and the number of times they advertised during the hour period are below. As one can see, 17 different brands advertised during the hour. These brands covered a broad range of categories across products (e.g., Blenders Pride, CEAT and Panasonic) and services (e.g., Amazon and McDonald’s), as well as domestic (e.g., Idea, Fogg and Kent) and global (Axe, Google and Suzuki) brands. Of the 17 brands that advertised, 11, or a whopping 65 percent, aired their ads three times or more, with Gionee, the Chinese mobile phone maker showing the exact same “creative” a mind-numbing seven times during the hour! 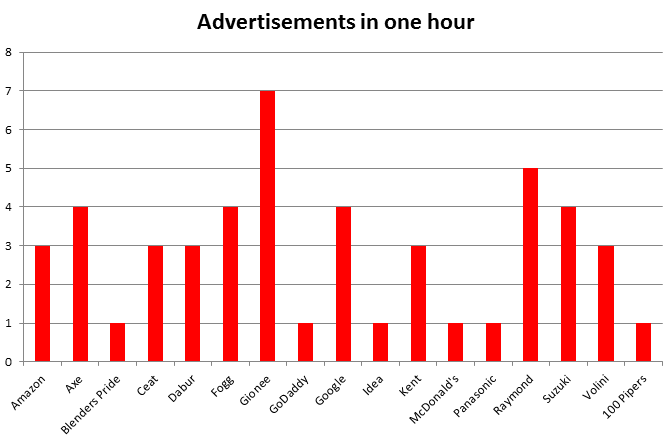 Why so much repetition? Theory has it that consumer response to repetition follows an inverted-U shape. That is, initially, consumer response increases with repetition, as consumers learn about the brand, but then declines, as repeatedly watching a brand’s advertising becomes boring and irritating. The point at which additional exposure has a negative impact depends on the complexity of the advertising, the amount of attention consumers pay to advertising, and the like.

Most lab studies, which show participants advertisements embedded in a TV programme during a viewing episode of less than one hour, find that optimal impact is reached with three exposures, declining thereafter.

In an earlier paper, “To Zap or Not to Zap: A Study of the Determinants of Channel Switching During Commercials,” in Marketing Science, S. Siddarth and I find in field data that incremental repetition starts to have a negative impact on consumer responses between 14 and 15 exposures. We show that, across product categories, this makes consumers likely to change the channel while watching TV if they see a given commercial more than 14.5 times. We also show that channel switching negatively impacts purchase behaviour. Importantly, these results were obtained using a dataset spanning two years. Our findings are consistent with other research using field data which show that repetition starts having a negative impact on consumer responses, somewhere between 12 to 15 exposures over a two-month period.

For those of you who don’t know about cricket, a day of test cricket spans three, two-hour sessions. The ads above were repeated throughout the day. Thus, 65 percent of those brands mentioned would have been seen 18 times or more while viewing a single day’s play; for Gionee, the most advertised brand, there would have been 42 exposures. Across the five days of a cricket test match, an ardent follower of the game would have seen 65 percent of the ads a nauseating 90 times or more and even the lightly advertised brands, well above the 15 exposure threshold. Gionee’s ad would have been seen 210 times by the test match viewers! However one slices the data, there is cause for concern. Are these brands overexposing themselves to their own detriment?

Yes, and others’ as well. Since ads are normally broadcast in “pods” with ads from other brands, a customer who is fed up and changes the channel during an ad break also reduces viewership for other brands in the pod.

The research data on repetition effects I refer to in my paper are from American consumers. So one question to ask is: are Indian consumers different? My intuition suggests that they cannot be that different. In my paper, I found that at least the time of day during which a commercial is aired and household demographic characteristics are unrelated to a household’s propensity to switch off an ad, suggesting that nationality may not matter.

Seeing an Amazon ad 90 times, an Axe ad 120 times, a Raymond ad 150 times, and a Gionee ad 210 times cannot reasonably be expected to not turn off a consumer through overexposure. Repetition beyond a reasonable level is annoying and turns consumers off a brand, be they American or Indian.

What should managers do about this? Change the message of each ad. However, in my study, while we found that the effect of doing this was statistically significant, it’s not substantial enough to make a difference to consumers zapping away from your ad. Another method is to change the length of each ad. We compared 15-second and 30-second ads, but again there is no difference in the effect on zap probabilities. Using a combination of the two just made things worse.

There might be one way to mitigate the likelihood of being zapped and that’s slot timing. We found significantly higher likelihood of viewers switching away during ads at the top and bottom of the hour compared with other times. With this information, brands could justifiably ask for a rate reduction if they’re in these slots or ask instead to be slotted in at 10 minutes or 20 minutes past the hour. The main takeaway should be to simply reduce the ad frequency, which will reduce wasteful expenditures and maximise potential purchases.

I would submit that there is a significant degree of over-advertising in the Indian marketplace especially, which is not doing the sponsoring brands any good, and most likely hurting them. If readers have any data on India or elsewhere in support of this theory or against it, I’d like to hear from you.

This article is republished courtesy of INSEAD Knowledge. Copyright INSEAD 2016.