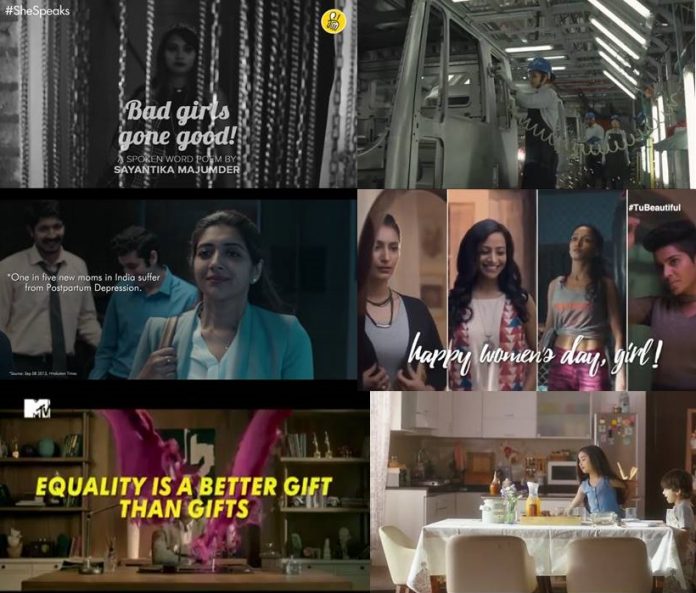 2017 and 2018 have seen great social movements like #MeToo and #TimesUp creating waves all over the world in almost every industry. This Women’s Day we present to you six ads that have been released for Women’s Day that show how much #MeToo has affected the marketing and advertising world.

How many people in India know about Postpartum Depression? How many men know that after delivery, their wives go through stress, depression and mood swings? Postpartum depression is not a topic that is talked about much in India, like most topics related to the female body. However, Prega News has broken the taboo and addressed the conversation in a positive way. By supporting the new mother, the ad not only encourages talking about postpartum depression but also highlights the importance of understanding at the work-place and how that can lead to happier and therefore more productive employees.

Read what Nithya Krishnan, Marketing Director of India & SAARC, Trend Micro has to say about the impact of the #MeToo movement in our industry!

From a young age boys and girls are conditioned to behave according to the ‘gender roles’.  As the ad clearly portrays, even young girls believe that only strong men can build trucks and buses. The words the little girls use to describe men are ‘strong’, ‘powerful’ and ‘tall’. When asked if only men can build these machines, the girls remain mum. What does it say about our society if girls as young as five think that only men can build machines? Ashok Leyland breaks the stereotype by showing the little girls that women too can build big machines. Their ad #BreakThePerception acts as a role model on how ads should be in the coming days.

When you hear the word pink, do you immediately think ‘girl’? That is gender stereotyping. MTV India’s new ad is humorous in its stark reality that women often receive ‘feminine’ gifts. At a workplace, most women would prefer equal pay over pink pens and roti makers. “Equality is a better gift than gifts.” The humor here is used as a tool to display the absurd stereotyping that follows gender.

Read what Rachna Prasad, Chief Business Officer of Oxigen Online Services has to say about the impact of the #MeToo movement in our industry!

A woman can be strong, gentle, beautiful, quiet, bold…no one quality can be categorized as only feminine or masculine. There are men who cook and women who kickbox. FBB’s ad rings clear with truth, a woman can be anything and be beautiful for it.

This ad shows the importance of educating children when they’re young because children are the future of the world. Boys and girls who support and understand each other grow up into responsible adults who can make the world a better place.

Read what Sakshi Vij, Founder and CEO of Myles has to say about the impact of the #MeToo movement in our industry!

Did you get goosebumps while viewing this ad? We did!It’s important for women to know that they have a space to voice the gender-based violence they have been victim to. It’s equally important that every human being has the right to tell their tale, and that their story is not ignored or taken lightly. FreshMenu’s campaign #SheSpeaks is about women taking back their right to speak.