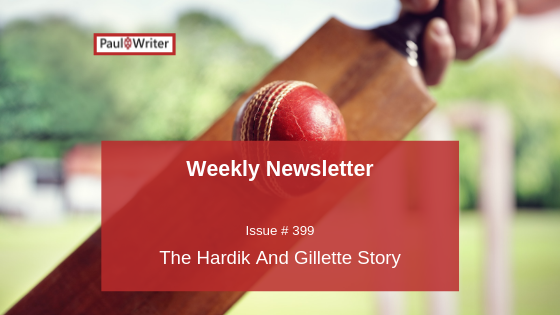 When I studied engineering the women’s hostel had a 10.30pm curfew. The men had none. If we went out to the local town with our male classmates, we fully expected them to escort us back and protect us from what is coyly referred to as “Eve teasing”. As the #metoo movement highlights, a world where harassment is ever-possible still exists even as there are a growing number of oases. Going by the public discourse it seemed as though there were an improved understanding of what constitutes harassment or denigration of women.

From what I can gather Hardik’s revelations on a TV show were those of a young man boasting of his success with women, and showing off his new-found fame and wealth. Crass, yes. Sleazy, yes. Illegal, unlikely. But, Ed Sheeran’s “Shape of You” has been viewed 4 billion times on YouTube, and its lyrics aren’t very nice. On the positive side the cricketer was very open about his lifestyle with his parents (a big surprise for India) and talked of protection (another surprise).

Certainly BCCI should have invested in media training for its golden boys, instead of running to bolt the door after they have scampered out. And a reprimand was definitely in order – but the scale of negative public reaction and penalty was a big surprise, and probably a big learning for many in the public eye. (Will Karan Johar cut down on sleaze going forward? Or is he just raking in the ratings?)

For an organization as public and rich as cricket, I’m really surprised each cricketer does not have a dedicated image consultant. Latest reports from Hardik’s father are that he is skulking at home and did not even fly kites this Sankranti. Ouch. Any PR consultant would have told him to go out and spend the day with the disadvantaged and show that he isn’t such a bad person. Public memory is short.

Brands on the other hand do take a longer view, or should. Gillette promptly dropped Hardik as a brand ambassador stating a mismatch of values. The size of the backlash against the larrikins didn’t leave Gillette much of a choice, I suppose. I do wonder if the public would have seen both Gillette and Hardik in a better light if Gillette had sponsored sensitivity training for the Indian cricket team, and provided counselling to its brand ambassador. One cannot assume that a cricketer (or anyone) automatically knows the values he is expected to manifest without some explicit guidance.

Gillette is of course in the eye of a social media storm itself. For, ahem, saying that toxic masculinity is a bad thing. But in the midst of the brouhaha over their new ad – the crux of which seems to be that it unfairly generalises men and also wants them to be what is considered in old-fashioned terms a wimp – there’s a significant shift that’s being lost. There are 2 kinds of marketing – one where we communicate the functional benefits of a product and the other where, because the product is commoditised, the marketing centers around a brand narrative. Gillette has moved from “The Best A Man Can Get” – which was about their product to “The Best A Man Can Be” which is an improvement program for the user that their product in no way enables. Debate about gender norms is a good thing. But I do wonder if brands should think twice before championing a change in user behaviour unrelated to their product. On the other hand, Gillette also sells to women, a market where they have around a 50% marketshare – so maybe the ad was not directed at men only?

I inherited a Kenwood Chef which turned 40 recently. It used to be marketed with the line ” The Chef does everything but cook – that’s what wives are for!” Today, Trump saying that he thought of asking his wife to whip up some salads for his football team guests is seen as being in bad taste, as it reinforces a stereotype that many (like me) are no longer comfortable with. (See Indian ads that break gender stereotypes )

I put together a 2×2 matrix on the basket of causes brands can use and used the 2×2 matrix to review the LGBT ad from Anouk of Myntra Causes work to make the brand stand out and attract an audience that self-identifies itself as belonging. Brands just need to ensure that that’s a sizeable proportion of their customers. We are in a period of social change where brands need to be very sensitive.

As established structures break, new needs arise. Nothing else could explain the Netflix series on “Tidying Up” with Marie Kondo where she enters a family home to teach them how to keep it neat. And yes, I’ve watched it.

This week sees activity for our upcoming Hot Brand Summits in full swing. Hope to see you all there!