When former US-President Bill Clinton proclaims that the three largest global soda manufacturers have declared their intent to reduce sugary calories by 1/5 within a decade, you can be assured of two things. One, it’s a pretty damn important message. Two, every media outlet imaginable is going to carry your message in their next news cycle.

Skeptics might argue that, for these oft maligned and outed soda manufacturers, the second reason might actually pip the first.

After a decade of fighting public relation battles that stretched from Mayor Michael Bloomberg’s attack on serving sizes in New York to numerous references in medical journals about the contribution of high-calorie sodas to teen obesity, there’s definitely a chorus of folks remarking “about friggin time guys”

To give credit though, reducing sugary calories by 20% is a great step forward – Jim Collin’s might even label it a Big Hairy Audacious Goal (BHAG) – but this spectre has haunted the category for a while. Worse, their historic responses – typically splashy marketing and advertising efforts – have been so saccharine and self-serving as to make no impression whatsoever. In fact, many of those earlier efforts were so poorly received that they were quickly quashed.

Two things strike me about this news.

2 – Why is it that so many mature categories seem so unwilling to tackle well-documented, broadly understood vulnerabilities in their value proposition?

I’m not so ignorant as to presume that a single memo or a strongly-worded email from the CEO would turn around the behemoths that are Pepsi-Cola, Coca-Cola and Doctor Pepper. When Interbrand values you at $17.8billion (Pepsi) or $79.2 billion (Coca-Cola) these are deeply integrated organizations that have spent decades chasing Michael Porter’s “core competencies” in manufacturing, distribution, new product development, sales and marketing. You don’t unravel that Gordian knot overnight.

But when you’ve invested countless dollars creating – and supporting with marketing dollars – a product portfolio of over 400 product flankers, bought new verticals to capture juice, water or energy variants and folks are still leaving in droves, it must beg the question “perhaps there’s something else we need to be addressing?”

But they’re not the only culprits.

Cable companies that advertise a slew of new content blockbusters yet seem unable to send a technician to my house at the time they scheduled.

Telco companies that offer a bewildering array of snazzy new phones and data plans yet take 45 minutes and several rounds of escalation to answer a simple question about my monthly bill.

Hotel companies with incredible mobile tools and services allowing me to rate, review and check-in to my $450-a-day room from anywhere yet also seem to think that charging me an additional $30 a day for wifi is somehow appropriate.
Software companies launching fantastic new features with every release though, sadly, those same releases seem to be bloated and buggy until release 3.0

There was certainly a time that building a business and brand by launching new products or adding new features was the fastest way to market success but, particularly in mature categories, that traditional approach seems closer to the law of diminishing returns than the greenfield opportunity of old.

What’s a marketing leader in a mature category to do?

Well one answer might lie in an unusual and unlikely source for mature categories – the fantastic work by Adam Morgan, the father of “Challenger” brand thinking. 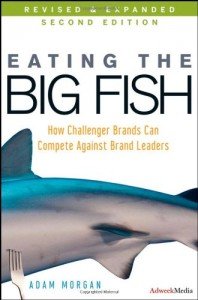 Amongst his 8 Credos of a Challenger brand, Adam sets out the notion of “Symbols of Re-Appraisal” which essentially asks brands to think deeply about what actions they can take to make consumers profoundly think differently about them. What would it take to make consumers stop and think “Wow, I’d never have believed category X or brand Y was capable of that” In Challenger brand folklore, when ING Direct decided to offer customers a banking experience without bricks&mortar branches, that was a profound “Symbol of Re-Evaluation” which lead to a redefinition of what consumers expected of the category.

It means taking on the sacred cows – or obscenely overgrown pink elephants – of the category. Or within your organization.
And, most importantly, its now the category champions, not just the historical Challengers that are doing this.
McDonalds stepped up admirably with their “Our Food, Your Questions”. Heaven knows, the QSR category – of which McDees is the de-facto big dog – has a very tattered and blemished record, particularly in the mature markets of the US, Canada, the UK and Australia. But by tackling their toughest critics head-on, versus dodging them, McDonalds was able to claw back some credibility – and create a Symbol of Re-Evaluation.

The brutal reality for all marketers is that building brands entirely on what we perceive as strengths is no longer enough. Our brand weaknesses, or vulnerabilities, are just as likely to sink our sales aspirations as our brand strengths are to drive them.

Well-informed consumers are just too socially-connected, too societally-aware, too financially-empowered and too able to find and purchase alternatives for us to think that not addressing our vulnerabilities is sustainable.

To paraphrase that terrible dream of King Nebuchadnezzar, perhaps its time for all brand leaders to consider if they’ve built a giant with feet of clay. Because, it may just be those clay feet – or Achilles Heels – that will topple your business.

The Social CEO (Or Lack Of)