If you avoid Twitter’s paid promotion tools in your marketing campaigns because you believe they’re too expensive or complex, it’s time to rethink that opinion. Twitter’s affordable, well-designed promotion tools can help your brand generate leads, build an audience, and amplify your content – no matter the size of your company.

What makes Twitter such an attractive channel for paid promotion? First, its 255 million active users send more than 500 million tweets a day. No matter what industry or market you serve, chances are your audience has a presence on Twitter. But the sheer number of users and messages creates a challenge for marketers: Unpaid tweets quickly scroll out of view, making it likely that your audience will miss many of your important messages.

In this article, you will learn about the five types of Twitter paid promotions, how they’re used, and the pros and cons of using them. 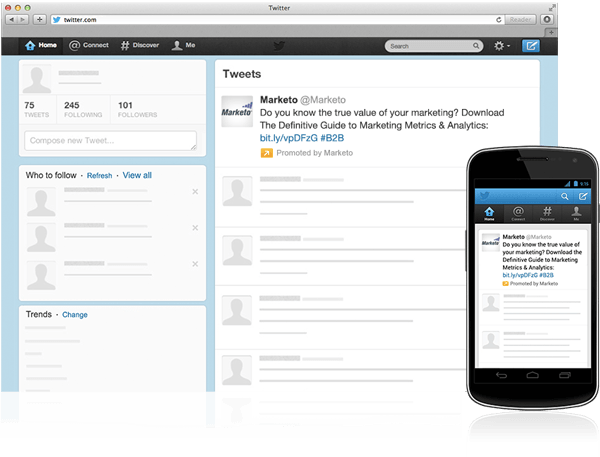 Promoted tweets work on an auction model similar to Google AdWords: You bid on access to your target audience. When you win the auction, you pay slightly more than the next highest bidder. Promoted tweets are priced on a cost-per-engagement (CPE) basis – you only pay when someone retweets, favorites, expands, clicks on, replies to, or follows you from the tweet.

Twitter allows advertisers to include multimedia in promoted tweets, which dramatically improves engagement. According to Twitter, promoted tweets that contain an image or video clip have:

The inclusion of Vine videos in a promoted tweet works well, delivering at least 250% more engagement than tweets containing only an image.

According to AdWeek’s Social Times research into promoted tweets, posts with:

If you include any of these engagement elements that don’t contribute to the results you seek, your users may click on useless elements, lowering the value of the promoted tweets. Eliminate the useless engagement opportunities.

You can set up and tailor promoted tweets quickly, which makes them ideal for time-sensitive campaigns. Twitter’s real-time dashboard enables you to see what your spend is and make adjustments to your campaigns at any time.

What the community says about promoted tweets:

Participants in CMI’s weekly Twitter chats like the cost-effectiveness of promoted tweets and have enjoyed great success with them.

“Typically, content that’s done well organically does the best when promoted,” Erika Heald (@SFerika) advises. “Over the holidays, one promoted post that was a little more light-hearted drove over 1,000 new Twitter followers with a spend of less than $200.00.”

Ryan Bilak (@TheRyanBilak), a sales engineer at e-commerce developer Jyllion, says, “Our promoted tweets have definitely caused an increase in overall activity on our accounts, the number of leads we bring in via Twitter has increased, and our overall following and exposure have increased as well.”

Promoted accounts are an effective way to increase the number of Twitter followers and enhance your social proof. In other words, the more followers you have, the more credibility and authority your company or brand appears to have.

Once you’ve set up your promoted account, use Twitter’s audience-targeting tools to make sure the most relevant people view your paid account ad. When the ad launches, your promotion appears in four locations:

As promoted accounts are most useful for growing your followers, make sure the call to action is strong and include your company or brand logo. 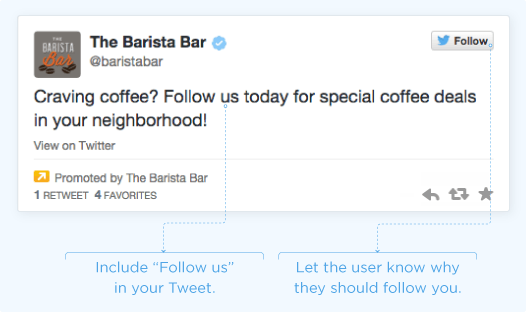 If your goal is to promote a product, event, or any specific content or initiative, consider using other Twitter ad tools, such as promoted tweets and Twitter cards.

What the community says about promoted accounts:

Josh James, CEO of Domo, shared this with Forbes about why he finds value in promoted accounts: “There are a variety of ways to acquire users … I believe the quickest way to build a high-quality following is a Twitter promoted account because Twitter gives you the ability to target more effectively, whether you are promoting your own account or promoting a specific tweet.”

To learn how to create a website card, watch this #TWITTERACADEMY video.

Maximize your website card by leveraging all elements. Write a tweet that gives people a reason to visit your website and include a brief description with your URL. Don’t forget to add an image to make your tweet stand out.

Twitter’s lead generation cards take the concept of the website card one step further. When a person clicks on the “view details” button in a tweet containing a lead generation card, an image, description, and call to action are displayed. The lead generation card also gives the users the option to securely send their Twitter handle and email address to the advertiser with one click without leaving Twitter.

Lead generation cards are free to distribute to your followers, but you also can use them in a paid campaign to non-followers.

To create a lead generation card, select and upload an image that represents your company or brand. Add a description, call to action, and the URL to which you want to send viewers. The link could direct them to a product detail page, lead generation form, or the home page of your site. A link to your website’s privacy policy also is required.

Twitter offers several advanced settings that enable you to send user data directly into a CRM application and match field names to your database. This optional step requires some level of technical expertise. Twitter integrates with 11 CRM providers, including ExactTarget, Infusionsoft, MailChimp, Marketo, and Salesforce.

Once a card has been created and saved, you deploy it by creating a tweet within Twitter’s ad manager and attaching the card.

For more details, check out this Twitter support article on how to set up lead generation cards.

Lead generation cards are ideal for experimenting with messaging, images, etc. Use the same audience targeting and bidding methods you use with promoted tweets.

Use lead generation cards to accelerate your newsletter sign-ups. Given that this leads tool captures a person’s email address, create an offer that gives him or her an incentive to subscribe to your e-newsletter.

Pay close attention to Twitter’s image size and format requirements for lead generation cards. Nothing kills engagement faster than a poorly formatted, out-of-focus, or badly cropped image. Twitter includes its image requirements in its card creation form to make it easy for advertisers to get this step right.

Keep in mind that you can add a simple message to your image to provide additional encouragement or to help Twitter users better understand what your offer is and how it will benefit them. Keep it simple – it will appear on the screen in a fairly small size, particularly with mobile devices. Too much text will be illegible.

Keep the conversation going. Once users have submitted their information from your lead generation card, create workflows to continue nurturing these leads. Share more educational information and value with them on a regular basis to move them along the sales funnel. 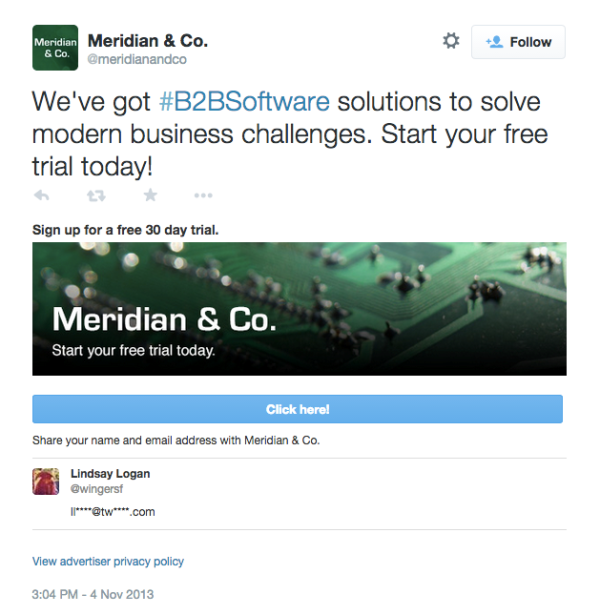 What the CMI community says about lead generation cards:

“We have used lead generation cards in the past, however, the Twitter lead generation cards were disappointing to us at first. We had a steady stream of new leads coming in every day, but they were extremely low quality,” Ryan Bilak cautions. “We now use Twitter website cards that are designed to drive traffic to a landing page and have seen much better results going this route.”

Unlike the previously discussed paid promotion Twitter tools, sponsored tweets are not sold by Twitter. To use this form of paid promotion, you must register with a third-party firm like SponsoredTweets.

With sponsored tweets, you pay other Twitter handles to distribute your message to their audience. Mandatory disclosures are attached to the message so their followers know they are seeing sponsored tweets.

Regardless of the type of paid promotion you select, Twitter offers an impressive array of tools to help you target your messages to people who are most likely to be interested in them. You can:

Twitter’s real-time dashboard provides up-to-the-minute data on the performance of your campaigns. This market intelligence includes:

Twitter paid promotions can be an affordable way to amplify your best content. You can use promoted tweets to:

As with any media channel, Twitter paid promotion has some potential challenges too:

-> Competition can drive up bid prices. Be sure to target your keywords carefully, and refine them as needed to achieve a balance of reach and cost.
-> Have a specific objective for your paid promotions on Twitter. Don’t run them just to gain followers – that isn’t cost-effective.
-> Start with outstanding content. If it’s not great, don’t waste your money on paid promotion. If people don’t engage with your promoted tweets, Twitter will remove them.
-> Provide real value for viewers. Don’t just beat people over the head with a thinly veiled sales message.

Be prepared to test, measure, tweak, and repeat before you start to see results from Twitter paid promotion. Bidding and targeting can appear to be complex at first, but stick with it and you can master it.

As Erika Heald explains, “Paid Twitter promotion isn’t a magic bullet, but it’s a great way to get your content – and your brand – in front of members of your target audience who might not otherwise be aware of you.”

Ryan Bilak concurs, “Twitter paid promotions are a great way to start building engagement and a following on Twitter for any company right off the bat. However, when it comes to lead generation with B2B, expect to test and measure until you find your sweet spot.”

Image courtesy of [bplanet] at FreeDigitalPhotos.net

How Twitter Beefed Up Its Engineering Services, Enhanced UI And Data...