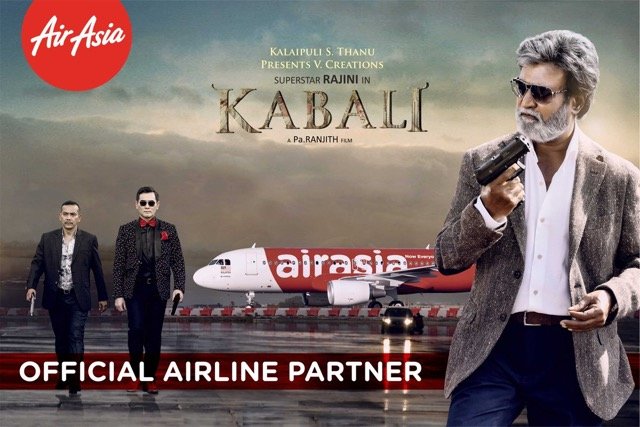 Fans of Superstar Rajinikanth are expecting a worldwide release of his next film “Kabali” in which the actor plays an ageing Gangster. A 1 minute teaser was release a month back and in continuation to his cult status, the teaser is now the most viewed one worldwide with over 20 million views at last count. The music, composed by a young and promising Music Director Santhosh Narayanan hit the internet on Saturday, 11th June 2016 and the album and its top number #NeruppuDa remain the number one respectively on Apple’s iTunes for a week now.

Rajnikanth has acted in over 165 films and commands a 60% “hit” status for his films. At 66, he remains competitive and a choice pick for Producers, Distributors and Exhibitors, for they expect a bounty with his films. He has never endorsed any brand officially in his film career spanning 40 years. There are succinct brand endorsements in his films, but nothing so loud that he would be seen suggesting his fans and viewers to buy a product or service. He has maintained that position for a long time and his fans love it that way. He never overdoes a brand association and that has been his trademark.

But when I saw some stills of Kabali, with an Air Asia (ICAO Code: AXM) flight in the background, I was quite surprised. The Malaysian low-cost airline (most of the film is shot in Malaysia) has tied up as the official partner for the film, perhaps to revive its airline business back in India. AXM entered India in 2014 with one aircraft and served the Bangalore –Goa route on 12 June, 2014, slowly expanding to 14 other cities. The company hired a bunch of freshers, outside of the Aviation Industry, which backfired massively for Tony Fernandes, the Rockstar Founder & CEO of the parent company, Air Asia Sdn Bhd. 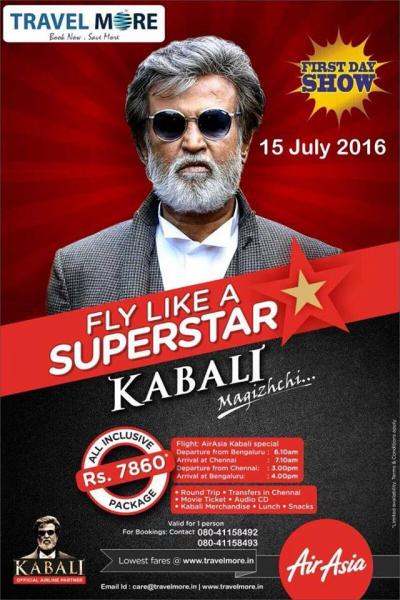 With this Brand association, AXM should hopefully get benefitted quite a bit given the fact that a large Indian diaspora, especially the working class lives in Malaysia and rest of South East Asia, where the airline is popular. Further, it also positions the airline as a respectable one, with the association of one of the top Indian stars in the country. It is unlikely that AXM will see a sudden increase in its flight bookings, but certainly a higher brand recall among passengers, especially in Tamil Nadu where the actor has a huge fan following. The first international holiday for a majority of South Indians continues to be South East Asia for two reasons – either they have a friend or family member who welcomes them; the cost of travel and the holiday comes at a very low price for a family.

AXM has two objectives to meet with this association (with Kabali) – to establish the brand stronger among the masses who travel currently by rail and convert them in to air travellers; to make AXM the preferred airline of choice for domestic travel. The Ministry of Civil Aviation has recently proposed a fixed fare of Rs. 2,500 for air travel of less than 60 minutes between a metro city and other smaller cities. This should further enhance the preference of AXM to domestic travellers. A travel agent has in fact even planned a package tour from Bangalore to Chennai to watch the first day show of Kabali… which includes a to-and-fro travel as well as local travel and goodies! Here is wishing good luck for the AXM to capitalize on this opportunity and come back strongly in the Indian market.

TorcAI Webinar: Has ‘data-driven marketing’ hit a snag with the entry...