Home Insights Billie’s Influencer Marketing Strategy is not yours. 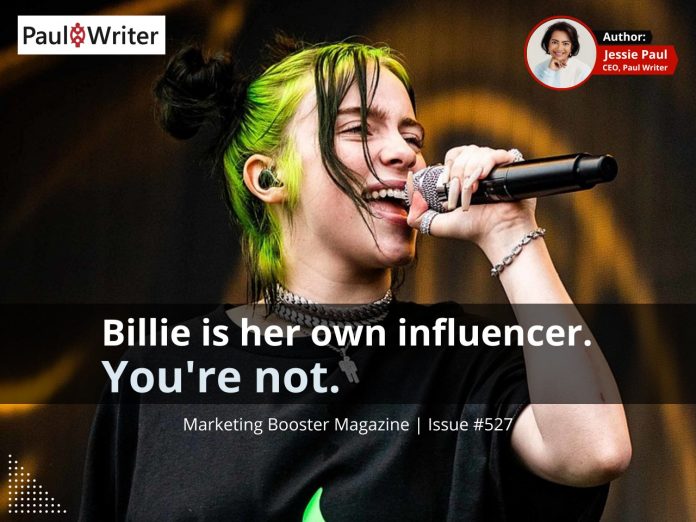 Influencer marketing strategy is nice, but researching Billie Eilish is more of an eyeopener.  I just attended her concert – she is an amazing performer. Billie’s not yet 20 and is already a fashion and music icon. Her songs sound super sad for an album titled “Happier Than Ever”.  But that’s beside the point.

Anyways, she has rated her own looks (should I be spelling that lewks) on Instagram. I thought the role of Instagram was to have other people rate your looks, but this is sort of a neat flip.  Why should influencers allow lesser mortals to judge them?

What to do when you face fake news:

Recently a brand I work with faced some online flak. It was motivated and deliberate and their immediate reaction was to counter that with facts. Countering lies with facts ought to be simple enough but sadly, isn’t sufficient. The narrative also matters – it’s not just what you’re saying but where you say it, how you say it and who is saying it. If someone says you’re bad, then you saying “I’m good” is not credible enough. You’ll need to have credible people – a.k.a influencers also say you are good. If they can do it in an interesting way – maybe singing or dancing to the message – it will be even better 🙂

Who is an influencer anyway:

There is a lot of confusion around who is an influencer.    Everyone with 1000 followers on Instagram or YouTube or even LinkedIn is not one.  Yet some people with no social presence whatsoever can be an influencer. I put together a helpful framework to determine where people sit on the spectrum. While today the term influencer is used to refer to a person, it is correctly used also for industry bodies and academic institutions.

How to make an influencer strategy work for you:

For example, if the brand dealing with fake news could have the influencer person share news about an award or certification from an industry body, there would be more credibility for the information. So in addition to building your influencer network of people, you have to invest in other types of influencers as well. (There’s a whole chapter on this in my book Marketing Without Money for those who are interested.)

For your personal brand, LinkedIn has thought this through – in your profile there is an option to add credentials as well as testimonials, a feature not many of us make good use of. (BTW, if you are puzzled by the content that is popular on LinkedIn, do remember that most people don’t pay to use the site and therefore it has to pursue eyeballs, engagement and retention just like Facebook or Insta.) For your company brand, you’ll have to design your own framework of influence.

Is a credible influencer an oxymoron?

Back to Billie. The only thing that jarred in her “self-assessment” of her looks was the number of Gucci outfits that made the cut. She is – you guessed it – an influencer for Gucci. On the other hand the in-house teen went eww over her Nike sneaker collab and sure enough the sneakers haven’t made the cut though I spotted a Vans reference, so maybe it isn’t all about endorsements.