As the global market faces a massive geo-economic realignment, multinationals are having to rethink every aspect of the way they do business.

What is the key to success in emerging markets? Is it a matter of strategy or execution, long-term coherence or the relentless pursuit of immediate market share and top-line growth? The question has been a trending topic in the business press lately, with no consensus in sight. What the debate has revealed, is that multinationals (especially Western organisations) faced with an uncertain future, are trying to confine the changes expected of them to a single realm. What may actually be required to stay competitive, however, is something else altogether.

As academic director of INSEAD’s new Emerging Markets Institute, I presided over a recent workshop at the INSEAD Asia campus titled “Emerging Markets – Rebalancing the World.” The discussions from that day gave a picture of a global business landscape undergoing tectonic shifts. To keep their footing in these uncertain times, business leaders will have to rethink not just one aspect, but the preconceptions underlying every step they take into unfamiliar markets.

Most experts agree that in the decades to come the faces at the forefront of the global economy will be much more diverse. Despite recent economic data suggesting a temporary emerging-markets slowdown – distinct changes have already emerged.

The number of North American companies in the Fortune Global 500 dropped by more than one-third between 2001 and 2013, while the number of Asian companies on the list more than tripled. Previously untapped markets in Asia, Africa, and Latin America are about to come into prominence with the emergence of a new global middle class that may comprise more than one billion people.

With this massive shift comes a host of challenges for major multinationals, including (but certainly not limited to) the finding, grooming, and retaining of local talent; innovating for a huge and diverse customer base who generally have less cash to spend than their Western counterparts; and managing the risks that follow from unfamiliar social and political tensions.

To keep ahead of the competition, companies moving into emerging international markets should remember some important steps.

1. Get accustomed to scarcity

“Two words Americans don’t understand are ‘debt’ and ‘scarcities,” Joergen Oerstroem Moeller, Adjunct Professor at Copenhagen Business School and Singapore Management University and former Danish ambassador to Singapore told the EMI workshop. Moeller argued that global consumption will be crimped in future as many developed economies try to discharge massive debt burdens. According to Moeller, the effect of debt combined with dwindling natural resources will change the focus of the global economy from consumption maximisation, to sustainability. Major opportunities will flow to businesses that find ways to eke out something extra from existing assets. “To repay the debt, you have to under-consume in the future,” he noted. Alternatively, the enhancement of productivity; the development of more compact supply chains and moving to the ‘no-waste’ model, will lead to the creation of “more from less” and ultimately, sustainability.

A clear global shift in consumption patterns from the developed world to the emerging one has commenced. Witness – more production in Asia for the Asian consumer as opposed to the Western one. In effect, a consumption rebalance in favour of emerging societies who have traditionally survived on less, as indicated by Vinika Rao, executive director of the Emerging Markets Institute, in her introduction to the session.

Moeller also observed how in the coming economy, the ‘I think, therefore I am’ adage will be replaced by ‘I communicate, therefore I am’, with specific reference to the ever-increasing importance of social networks. The world has long known how Barack Obama’s presidential election campaign masterfully leveraged social media in 2008. India’s elections this year showed how such a plugged-in political strategy could also work in the developing world. The differential challenge? Unlike in the U.S. in 2008, only a small minority of India’s population has access to the internet. Indian Prime Minister, Narendra Modi’s social media strategy was successful at balancing practical merits (connecting with young voters as perhaps no political candidate had before) with symbolic resonance (acquiring a reputation for transparency and responsiveness). Modi’s historic victory is an object lesson in the power of communication to create valuable social capital. This power may begin with technology, but ultimately wins by putting people first.

Serguei Netessine, theTimken Chaired Professor of Global Technology and Innovation at INSEAD and Karan Girotra, INSEAD Professor of Technology and Operations Management’s latest book The Risk-Driven Business Model looks at the way companies like Uber and Airbnb were able to disrupt ossified industries by creating innovations in their business models. These innovations may be easier to effect and require fewer resources than the much touted technological innovations namely big data, artificial intelligence and nano technology.

Netessine notes how even in the frantically innovating technology space, Chinese smartphone company Xiaomi was able to cash in on two-way communication with users – to the tune of more than US$5 billion in annual revenue – by incorporating weekly upgrades that take consumer feedback into consideration. Drip Irrigation changed its business models with great success. From focusing on manufacturing efficiency aimed at becoming “the best drip irrigation equipment company in the world”, it became a solution provider – “helping the world grow more with less”. It introduced contracting based on crop yields to transfer risk from the farmer to the suppliers. These business model innovations require fewer resources and more creative thinking, which is no longer the domain of the Western innovator.

To leverage the opportunities of a rebalanced world, leaders need more competence in cross functional leadership; managing transformation and risk. At the individual level, this will require managers to be more communicative and empathetic, as well as adept at networking in order to build and lead teams of increasing diversity.

Businesses increasingly branching out into unfamiliar territories are finding themselves more and more dependent on partnerships both within and outside their organisations to help them adapt. Rather than seeing NGOs and the public sector as potential antagonists, multinationals may need to work more closely with them to manage the considerable risks that arise from attempting to tap opportunities at the base of the pyramid. Supplying the neediest segment of the population with beneficial goods and services becomes less challenging when companies draw upon the local expertise and credibility of non-profits, foundations, and government agencies.

A more collaborative solution is also essential to bridging the talent gap. There is no shortage of hard-working and hungry employees in Asia, but in order to entice them to your company and keep them engaged, you will need to convince them that they’ll learn something new every day. Widening the information funnel at the lower and middle management levels can help accomplish this. To improve their leadership pipeline, companies may also need to form close collaborations with local universities and recruiters.

Corporations will have to become much more comfortable with uncertainty if they want to gain traction in emerging markets. As these markets rise to prominence, there will be growing pains and fluctuations in growth. Market supremacy over the long-term will belong to companies that are willing to ride out the dips.

In addition to fortitude, companies will need flexibility. The developing world is one of rapid change: strict adherence to what worked yesterday may put you on the back foot. The tension between short-term profits and long-term strategy is likely to increase. As always, it will take the firm hand of a gifted leader to guide the ship into safe harbour, and avoid being at the mercy of the winds.

B2B Brands – being successful in the Human Era 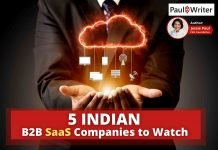