Home Insights Why Should David Hasselhoff Be A Part Of Your Webinar? 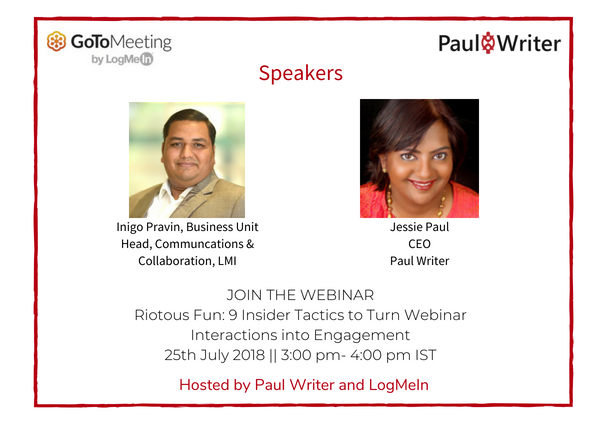 Paul Writer and LogMeIn co-hosted a webinar on how to make the best use of the fastest-growing online events, that are convenient, easily accessible and cost effective, we’re talking about webinars of course.

Jessie Paul, CEO, Paul Writer introduced the topic and speaker, Inigo Pravin, Business Unit Head, Communcations & Collaboration, LMI. Considering that the digital economy is on the rise, webinars are an ideal way to share insights and promote your business.

Inigo started off with a poll on GoToWebinar, a platform of LogMeIn and talked about the 9 strategies that can create engaging webinar experiences. The poll disclosed that 11% of the audience believed that their webinars were not having the impact they hoped it would.

Inigo, himself began the webinar with a picture of the famous David Hasselhoff and asked the audience if they recognized him and the show ‘Baywatch’. By getting people to respond with their favorite shows to binge-watch, Inigo was able to get the audience to interact. Once the icebreaker does its work, the audience will feel encouraged to interact further. Icebreakers get people to lean in and help in setting the tone.

Engaging in a discussion with panelists, or with the audience makes it less of a monologue. Discussions are more beneficial to both the speaker and the audience, with the sharing of knowledge and answering questions that might not be as frequently asked.

Inigo began the webinar with a poll on how engaging the audience believed their webinars to be. He used the answers to start off the topic. Polls are an excellent way to generate engagement. Q&A and pulse checks (to see if you’re going too fast or slow) can be helpful in creating a to-and-fro feeling in a webinar, as well as making sure both the attendees and the speaker are on the same page.

4. The rule of three 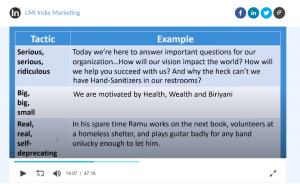 Generating laugher using ‘the rule of three’ is another tactic to make your webinar engaging. By interjecting humor during the presentation, you can grab the attention of your speakers. If the presenter feels at any point the attention level of the audience is decreasing, they can use this tactic to regain and regale their audience.

Leaving your listeners with food for thought, questions that don’t need answers but will get them thinking- ensure that the audience is gaining information. It also gives them the opportunity to come up with questions that they can ask during the webinar.

Seeing similarities with ‘Kim Jong-un’ in appearance, Inigo stated how mimicking a famous person can also generate laughs. Kim might be the supreme leader of one country, but Inigo believes Kim is trying to live off his fame.

Using the same font can be repetitive and boring. By changing the font you can catch the eye of the viewers. If there is a statistic that you want to highlight, or a phrase, tactic etc., you can highlight it in a different font or color. Viewers are more likely to retain the memory as well.

One of Inigo’s favorite tactics is to riff on a game show or board game. ‘Are you smarter than a (typical) webinar presenter?’ Using the poll format, you can ask questions that can drive home the content. A famous American board game called ‘Fact or Crap’ would give you a statement that you had to decide whether it was fact or crap. Or by starting the webinar by announcing that the attendees at the end would get a gift voucher, or the ones who answered the questions right would be rewarded, creates excitement and gives the attendees incentive to stay for he webinar.

Using the GoToWebinar features, Inigo unmuted the audience that raised their hands for questions and engaged in a verbal conversation with them towards the end of the webinar. Depending on the time you have, and your topic you can employ this tactic to establish a rapport.

Of the nine tactics, the three main things a presenter should focus on the first tactic of icebreaking which will make the rest of the webinar easier, the second would be generating laughs through the rule of three or mimicking a famous person and the third would be the game show tactic.