Home Insights To quote Borat, your brand can be “very nice” 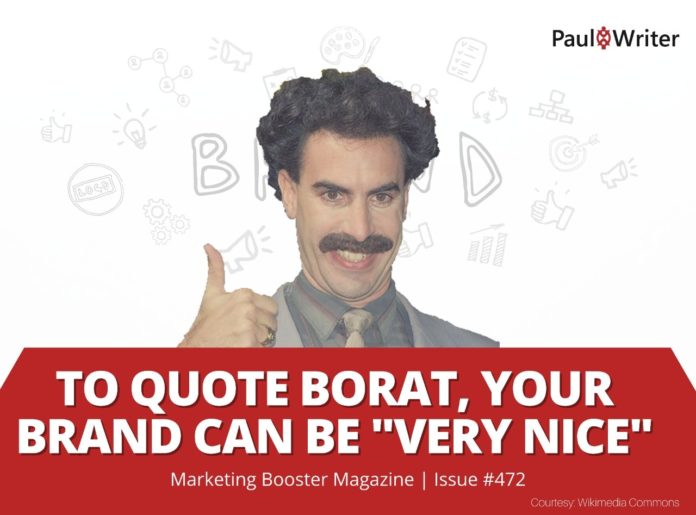 In 2006 the movie Borat (Sacha Baron Cohen) was a big hit. The full name of the movie was Borat: Cultural Learnings of America for Make Benefit Glorious Nation of KazakhstanI remember finding it funny, if a bit over the top. Nothing about Kazakhstan – except its location on the map – was portrayed accurately. Kazakhstan was very far away and barely registered in my memory. Their government, however, was all kinds of offended and banned the movie. Now in 2020, Borat is back with a sequel “Borat Subsequent Moviefilm: Delivery of Prodigious Bribe to American Regime for Make Benefit Once Glorious Nation of Kazakhstan.”

This time the reaction of the Kazakh government is quite different. Their tourism board has embraced Borat’s catchphrase “Very Nice” and launched an ad campaign around it. In a clear case of when handed lemons make lemonade, they have realized that it’s better to be known than unknown, and ‘embrace’ the free publicity. When I had posted the news of this campaign on our community forum Srinivas Vijayaraghavan pointed out that the Mormon church had done something similar when the parody musical “Book of Mormon” came out in 2011. Individuals are generally more game for this, participating in shows like Bigg Boss, Indian Matchmaking, and of course interviews with Arnab, knowing that they might not come out entirely positive, but at least a little famous. I can’t really think of corporate brands that have pulled this off successfully. But with the interest in embracing causes that I wrote about earlier this month, it is worth considering.

I have been chatting with many readers and one of the asks was to provide more actionable articles. Rather than change the format of this newsletter, I have started writing a new series on low cost marketing techniques. Last week I talked about how community is an oft-neglected aspect of brand building. This intrigued a number of you so I wrote an article on how you can use community as a lever to save you millions in ad spend. At Paul Writer we’ve managed communities for some of the largest global tech players with thousands of members, but even a simple WhatsApp group could deliver value to your business.

Much like Borat, I too am working on a sequel (ok, similarity ends here). In 2009 I had published No Money Marketing (Tata McGraw-Hill) which encapsulated my learnings building global brands on a relatively low budget. Much has changed since then so a new version is in order, and Bloomsbury has kindly agreed to bring it out. This one is even more action-oriented with lots of frameworks and blank formats for you to build your own strategy and marketing plan based on the principles in the book.

Tomorrow I’m sharing the ’stage’ with Xavier Prabhu and Mihir Dayal at the Bangalore Business Lit Fest discussing  “Who wants to read your book?”  Masterclass would be super useful for authors and would-be authors. And I do believe we all have a book inside us! Hope to see you there. I’m finding virtual events really helpful and at least for me the opportunities to learn and participate are so much better without having to be physically present. How is it going for you?

I miss events as a way to socialize, but one of the ways to get around this is to just pick up the phone and chat with people before and after the event. Or have a Whatsapp conversation or Zoom or Teams – you get the drift.  It takes a little more effort but as it is one on one I find it much more personal. So if you’re at Bangalore Biz Lit Fest ping me!

Saturday is Halloween! It’s like this whole year has been one long prep towards this 🙂 Wishing you many treats and no tricks.