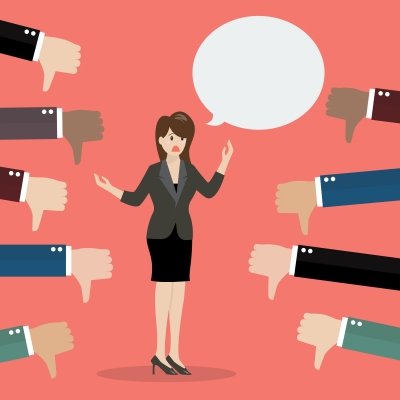 Recently, I was sitting next to a woman on a plane and noticed that she was scrolling through her Instagram feed for what must have been 30 minutes straight. (Thank God for in-flight WiFi, am I right?) What took me by surprise is that not once in those 30 minutes did she ever double tap or comment on a photo. Imagine my dismay when I realized I was sitting next to a REAL LIFE LURKER.

Don’t deny it. You know many a lurker. You may even be one yourself. No judgment! In fact, the majority of social media users are lurkers. Since the birth of the interwebs, participation inequality in online communities has been a problem. In the last decade, we’ve learned of this strange ratio that plagues online communities: 90% of your followers are lurkers, another 9% occasionally participate, and the remaining 1% regularly engage.

Yeah, for real. But don’t freak out just yet. For starters, some research has debunked the 1% rule and argued that since barriers to engagement have decreased substantially in recent years, some of those initial lurkers have now graduated into actively engaged audiences. Kind of amazing, right?

But still, there are way more lurkers on any brand’s social channels than any of us would like. So, what’s the deal…why are people following your brand but never interacting with it publically? It’s not just because they’re creepers. Lurkers actually get a really bad rap and also get thrown some shade on the regular. But the reality is that lurkers have really good reasons for lurking, such as:

This isn’t any different from being at a party where there’s a bunch of people you don’t know. Not everyone is super outgoing and willing to engage with a perfect stranger. Some people tend to worry that they won’t be received well or, worse, that they’ll be laughed at for saying the wrong thing. Think about this fear in social, where your comment can be screenshotted, your photo can be taken and uploaded to meme-hungry Redditors, and your video can be turned into a GIF for all of Giphy to enjoy. That perspective can help you see why some of your fans may not be ready to chime in on the conversation.

They’re Kind Of Intimidated By Other Members Of The Community

Let’s face it. We’ve all been somewhere that we’ve seen a bunch of people who are cooler than us doing things that we only aspire to do. This can happen all the time in social. It’s more apt to happen on niche channels like Twitch and Reddit, where the community of creators and engaged fans are highly specialized, but it’s also present on Facebook and Instagram. Consider communities like #JJ on Instagram, a creator community whose content has become so sharp that it can be intimidating to even add #JJ to your Instagram post for fear of being scoffed at.

They’re Not Sure If The Brand Gets Them, Based On Content The Brand Is Putting Out

If you’ve ever told a dramatic story to your best friend only to have them totally misinterpret your reaction, then you’ll get this. There’s nothing worse than having a clear affirmation that you’re not being understood. Brands that post content that clearly misunderstands their audience’s passion points are, inadvertently, sending the message that it’s not worth engaging. Remember, the tried and true methodology of creating your social strategy with your audience in mind is key.

Sometimes lurkers take a leap of faith and post on your brand’s Facebook wall, or reply to another fan’s comment with their own story. Whatever you do, don’t ignore them or miss their post. Lurkers are like the shy kids in grade school who once added a scoop of sand to your sand castle bucket, but you didn’t notice so they just walked away quietly. Consider this the moment of truth for the lurkers in your community. If your brand is present and engages with them, they’ll be affirmed by the reward and they’ll come back for more.

This is just the tip of the iceberg when it comes to lurkers. Not only are there other reasons for their lurking, but there are also some tactics you can employ to urge them towards engaging. For that, you’ll have to stay tuned ;).