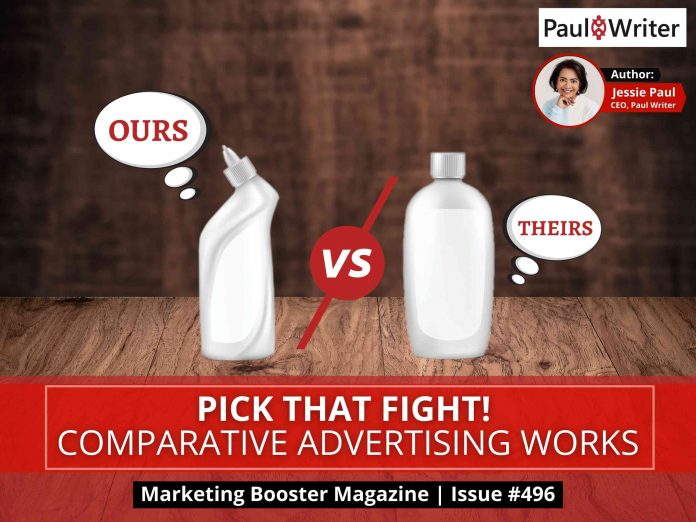 Most of us were brought up the old school way – don’t point fingers at the flaws of others. This reflects in our marketing and advertising. One of the first brands I worked on was RPG Cellular. At the time, our only competitor was Skycell. While we indirectly poked holes at their lack of coverage and towers with themes like “widest coverage” or cartoons showing their customers hanging out of windows to make calls we were never allowed to actually name them. Could have been fear of retaliation or a legal wrangle.
But if your product is genuinely better than the other fellow, why not say so? More so if the competitor is the market leader and luring even a tiny percentage of their users would double your marketshare?
Domex released an ad campaign comparing themselves rather favourably to their much bigger competitor in India, Harpic. Their claim is that Domex does a better job of cleaning the toilet and prevents a bad smell. Let’s assume that the “after smell” is a decision factor in the buying purchase, or at least an untapped need that is now being met.
This relatively low cost marketing strategy has gotten people to talk about it on social media and websites which has increased awareness for both brands, Domex and Harpic. Domex, the smaller player stands to benefit significantly if even 1% of Harpic’s users switch.
Sebamed takes on Lux
Sebamed, hitherto a specialty pharmacy brand soap tried to reframe itself as a mainstream choice by claiming that its pH factor was superior to market leader Lux. Unilever, Lux’s parent, even took Sebamed to court and lost. This low cost marketing strategy is low-risk and high gain for Sebamed – again, if even 1% of Lux’s customers make the switch it is a significant marketshare gain for the much smaller brand.
Why comparative ads?
In today’s world where the consumers are spoilt for choice with the numerous brands on offer, it may be difficult for challenger brands to create a demand for their product or services. Comparative advertising is a low cost marketing technique that can help make an impact in the minds of the customers. It isn’t that common for companies to name their competition, but when they do it grabs attention.
A comparative advert uses the competitor’s brand name, some of its features or price while promoting their own products to lure more customers into buying their product which may have greater benefits than the competitor’s.
Brand owners are often frightened to adopt this tactic and some marketers even term it unethical. I disagree. If the claim is factual and can be substantiated, the customer deserves to know why they should choose one product over another. If the claim creates controversy, well, at least your product is getting talked about.
Comparative advertising in B2B
This tactic isn’t limited to B2C challengers. For many years Oracle ran competitive ads, including against IBM. And, as I discuss in my upcoming book, published by Bloomsbury, “Marketing Without Money: An Essential Guide”, Freshworks took on Zendesk and later Salesforce.
Can you use this low cost marketing tool?
Can this technique be used by individuals? It often is, in the context of appraisals or promotion requests. Where individuals can fail is when they don’t pinpoint the right heuristic that matters to their boss, and then back it up with data. For example, instead of a generic claim like “best sales performer” one could say “10% more sales than the second best salesperson”. Individuals rarely take this approach because they feel it is boastful or that “boss will know”, but if you consider the decision maker as a consumer, you’ll perhaps perceive that you are just educating them with the right facts. Just like Sebamed or Domex.
Have fun with this technique from the treasure chest of low cost marketing strategies 🙂