Established firms do not have to develop innovative capabilities entirely from scratch. By following a path blazed by designers, they can develop homegrown innovation processes and a culture of creative thinking.

Established organisations have a tough time being innovative. Years of ample, dependable profits often leave companies weighed down by bureaucratic processes that are difficult to shed. Shareholders’ quarterly expectations seem more urgent to them than changes that may, or may not, disrupt their industry years down the road. Additionally, “innovation” itself is a somewhat vague concept, and many incumbents lack a clear idea of what it might mean for them. All these factors argue for inertia.

In my last post, I described the three core capabilities that allow design (consultancy) firms to consistently innovate. Those are the three I’s of innovation: User-centric insighting, deep and diverse ideating, and rapid and cheap iterating. It is my contention that by “bringing design in-house,” companies can start to develop their own versions of these capabilities. Established companies, obviously, cannot mimic the exact organisational structure and culture of an entirely innovation-based design firm such as IDEO or Continuum or Eight, Inc. They should not even try to. But any company could create the conditions for maximum innovation, through a design-led realignment of their internal processes and culture.

Aiming for the Innovation “Sweet Spot”

To clarify this process with a simple image, let us first look at how your organisation differs from a typical design firm. To do this, let us consider the following framework: 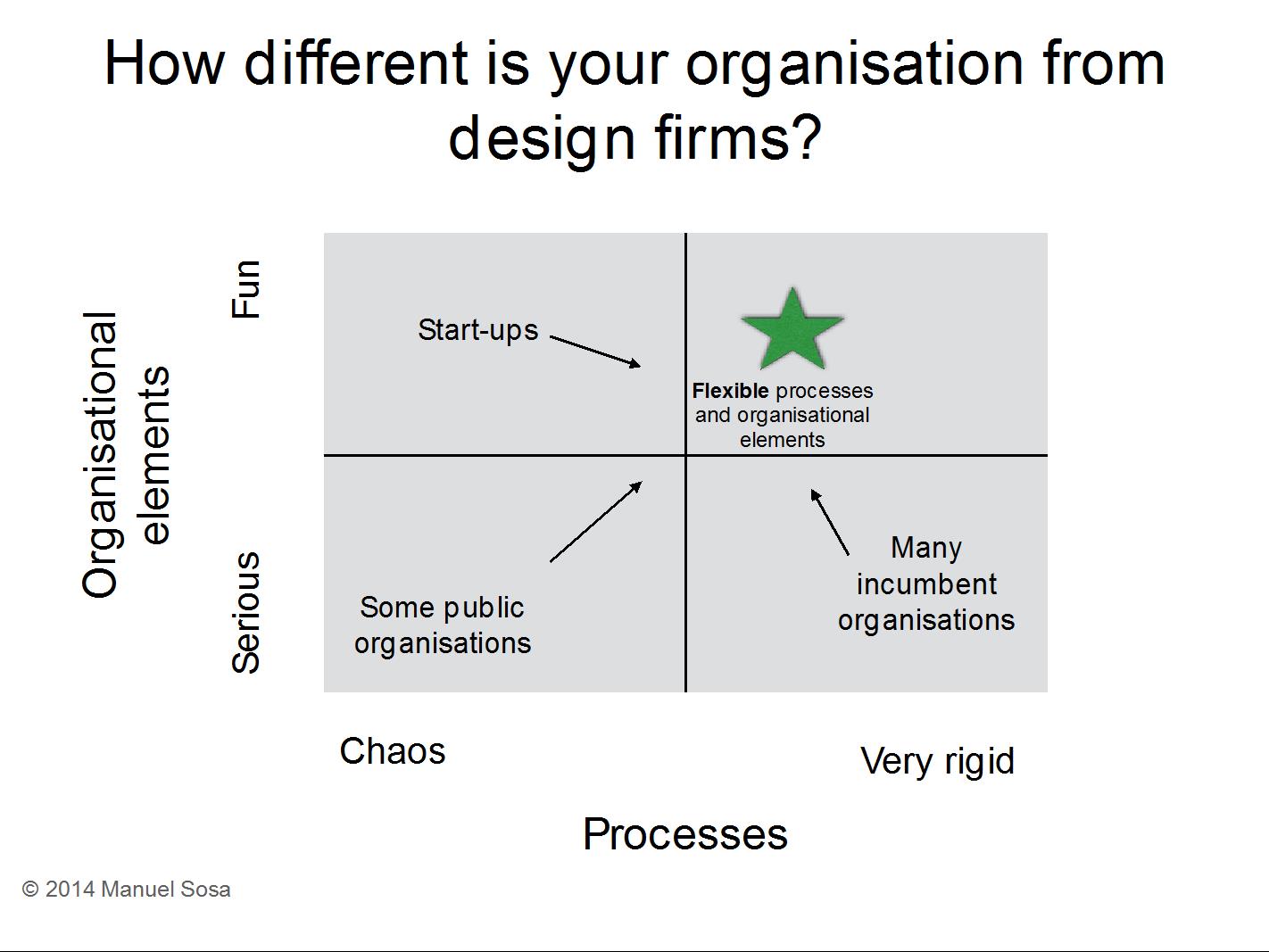 As you see, there are two main areas that impact the development of innovative capabilities: Processes (the way companies get things done), and Organisational Elements (the people-related intangibles that make up an overall culture, such as management style, organisational values, and the profiles of people in your organisation). The green star represents where the best-known design firms sit: not at any of the four extremes, but aligned toward a happy balance of order and chaos. Design firms have developed processes that are fixed enough to avoid redundancy and confusion, but agile enough to adapt to changing conditions. There is no order for the sake of order. If processes fail to be productive, they are thrown out.

Many government agencies in developing countries are arguably in the worst of both worlds: Operational chaos within an atmosphere of creative stagnancy. Innovation is impossible under such conditions. Only by being completely insulated from important stakeholders (i.e. the public) can the agencies maintain these coordinates.

Start-ups face the opposite dilemma: unformed processes in an atmosphere of “anything goes”. There is immense innovation potential here, but in order to scale up, start-ups will eventually have to place a sturdy yet flexible framework around what they do. Indeed, companies like Apple, Google, and Facebook were all in this quadrant during their early days.

Finally, there are the incumbents. They have perhaps the most taxing journey ahead, in venturing from their comfy cranny towards the innovation “sweet spot”. Fortunately for them, collaborators from the design world can point the way.

Soon after A.G. Lafley was brought in as CEO of Procter & Gamble in 2000, he charted a course for design-centred innovation by appointing Claudia Kotchka as VP, Design Innovation & Strategy.

Consumer electronics company Belkin International underwent an even more radical design-led transformation beginning around the same time. By the late 90s, the company had grown light years beyond its humble beginnings in a California garage, but its core values emphasising good manufacturing quality and effective distribution were a holdover from the early days of the PC. Changing these values simply had never become necessary. But then customers and distributors began requesting that Belkin add customised features to its portfolio of standard cables, adapters, and hubs. The company outsourced the job to industrial design consultancy Hauser, Inc. The cost of outsourcing quickly grew to more than one million USD, as the influx of desirable new products stirred the hunger for more and more design work. Hence, Belkin began to mull the prospect of building an in-house design team.

But Belkin’s corporate culture at that time was so far from where it needed to be that Ernesto Quinteros thought twice before accepting an invitation from Belkin’s director of product management and marketing, to come on board as chief designer. “I had already worked with Belkin in 1998 as a freelancer,” Quinteros recalls. “Belkin knew that design added value but they didn’t know how to work with design teams.”

From “Industrial” to “Innovation”

Quinteros accepted the job, but demanded a separate facility for his design team, apart from Belkin’s headquarters (HQ). Quinteros’s Industrial Design Group (IDG) set up shop in a rustic Hollywood building, an hour’s drive from the HQ, within the less impressive Compton (CA) location. The next year, Belkin’s Firewire hub was featured in influential design magazine ID. The IDG grew and began to attract more partners, including Apple, for whom IDG developed the first accessories specifically for the iPod in 2003.

After about five years, the IDG transitioned into Innovation Design Group because it had grown to include not only industrial designers but also mechanical engineers, user experience and user interface designers, design research, graphic design, packaging design and 3D prototyping. This was now a sizable group dedicated to creating innovative Belkin products.

HQ staff became increasingly curious about the goings-on in Hollywood, according to IDG’s second member (and current head of Belkin ID/UX) Oliver Seil: “They would come to visit and appreciate our vibe. They would say ‘Oh, wow. These guys are special. They collaborate differently and get the job done professionally.’”

Crucially, Belkin’s CEO at that time, Mark Reynoso, cultivated that difference rather than trying to squelch it. In 2006, Quinteros was named VP of Design, and soon afterward discussions were underway to end IDG’s physical separation from the rest of the firm. When Belkin relocated to Playa Vista (California) in 2010, the designers not only came along but Quinteros also led the design of the new workspace. He also took the lead in the re-branding of Belkin which was announced in 2011. By that time, he had been promoted to Chief Brand Officer and he later became Belkin’s Chief Design Officer.

Quinteros explains IDG’s success this way: “As designers and innovators, we always took our inspiration from the people who used our products first. By understanding the critical intersection of people’s desires, needs of the business and then applying the appropriate technologies, we became a credible resource within the organisation that consistently delivered people-centered innovation.”

Quinteros departed to become Chief Design Officer for Johnson & Johnson in 2014, but the innovation culture he helped to inaugurate at Belkin lives on. Belkin continues to be at the vanguard of the Internet of Things with its expanding range of WeMo smart devices for the home, its acquisition of Linksys and a wide range of other products.

Why were P&G and Belkin successful at developing a design-led innovation culture? Almost certainly, one key factor was the strong air cover given to Kotchka and Quinteros. Strong top-level support and credibility conferred by top management would have enabled the design heads to push through changes despite internal resistance.

For the spirit of change to win the day decisively, however, it is necessary to wear down resistance, not merely circumvent it. Especially at the early stages of the transition, it’s important to show how design can benefit the bottom line. Bringing in outside designers with a proven track record is the ideal catalyst to initiate the change. Designers can help gain the initial traction needed to set the wheels in motion. Once that occurs, the important organisational elements (the intangibles that live on the vertical axis of the above graph) start to become open to change.

Even under the best of circumstances, this is not a speedy process. The larger the company, the deeper the resistance is likely to run, and the longer it will take to infuse creative thinking throughout the organisation. Perseverance is needed. If the C-suite isn’t willing to stay the course, it becomes much harder for the new culture to take hold.