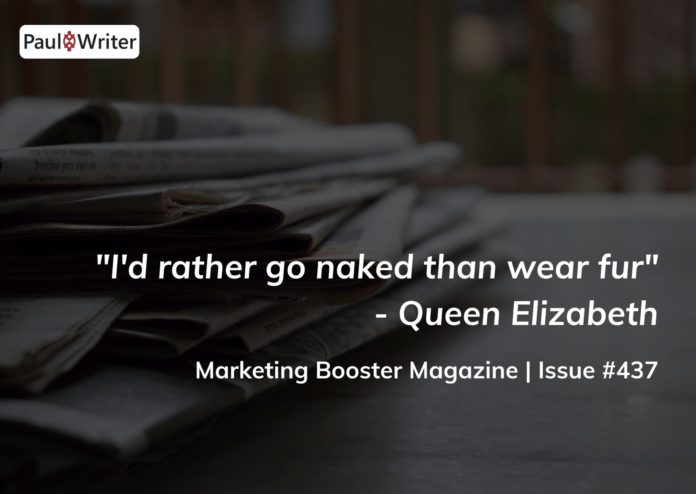 She didn’t quite put it that way, but Queen Elizabeth II says she will no longer buy clothes with fur. Most designers ditched fur years ago, and now even the queen, at the age of 93 is making a change. PETA has decided to move on to newer battlefields and is finally retiring its “I’d rather go naked than wear fur” campaign which it launched in the 90s. This campaign got talked about so much – even in India where fur fashion is really not a thing.

To stand out you have to take a position that people want to think about and talk about.

I enjoyed Vir Das’ new Netflix special where among other things he takes an extreme position on Chyawanprash and proposes “Choke your children the legal way” as a tagline. Dabur isn’t the only maker of Chyawanprash but they were the only ones to respond and are now being praised for being ‘cool”. Stories of Chyawanprash smoothies are now in mainline papers. Will it convince more people to try it? Certainly has a greater chance than advertising. Now that someone has finally said it out loud, will Dabur be brave enough to embrace the awfulness of the taste and link it to its worthiness? Like “If it tastes good, it probably isn’t doing good” Dettol stings while Savlon doesn’t, but the sting has been associated with ‘healing power” allowing Dettol to hang on to its lead. As for Vir Das, he has clearly selected his audience and is unafraid of taking an edgy stance on politics and brands.

Uber has ‘restricted access to the system’ for their driver partner who drove a passenger to the police because he did not agree with his politics and activism. It is the right thing to do but nonetheless a brave stance as it is not clear that public opinion will be on their side – the driver is already receiving awards. I often say that companies cannot have morals, only people can. Brands are representative of the people they serve AND the people who own them and in the age of change they are forced to take a position on issues. In this case Uber has decided in favour of its customers and I hope they’ll be able to stick to this position. In other news, Ola launches in London today! I’m happy for them and hope they are able to avoid the safety issues that have put Uber at risk of being banned there.

Among the Super Bowl ads, the Microsoft Surface ad stood out as one where the ‘people’ are directing their brand to take a stance that will resonate with their chosen audience and make them cooler. The ad features Katie Sowers, the first woman to coach in the Super Bowl. She is also the first openly gay coach at the Super Bowl. (Super Bowl advertising gets talked about because it costs around $5 million for a 30 sec ad, not including the cost of production.)

Brands should prepare their position on trends in advance even if they are not actively impacted or reacting to one. Which trends did you say? Well, I’d go with deep social trends, not the superficial tech trends like the one I read today. I found this compilation much more thoughtful. The author aims to distil the learnings from 500+ reports. Even Unilever, not famous for its eco-friendliness, has sustainability goals that embrace many of these trends and will change the audience’s perception of them.

I say “chosen’ audience a lot in today’s newsletter. That’s because brands are designed for ever smaller slices of audiences that align with their world-views. A ginormous corporation may own multiple brands, each catering to a different image or belief of its audience. It’s hard today to be a mass brand and remain neutral.

Homework: who is your core audience? What edgy position can you take that will get them to notice you? What is the change you seek?