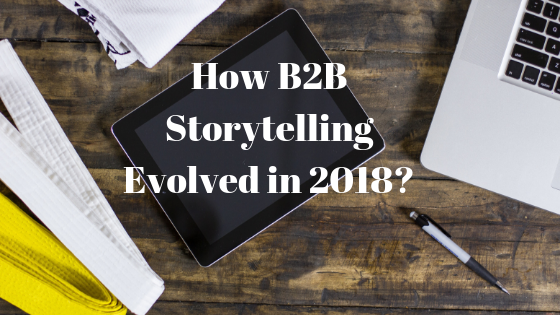 Imagine you are an 18-year-old. Preparing for your debut film which is at least a year away from its release. To promote the movie, the filmmakers release a music video from the movie. Six months later you end up becoming the most searched person on Google for 2018. Isn’t that enough to explain what videos can do for your brand?

Priya Varrier’s story is not about the 15-second clip which caught the world’s attention. It’s about millions of content creators who have learned how to capitalise information. Without the associated searches and videos, every trend ends up becoming a fad.

Related searches and videos feed on peoples curiosity. The more inquisitive you are, the more likely are your chances of viewing similar videos. Even the algorithms are designed to support this cycle.

Storytelling for B2B Brands in 2018

On the B2B side of marketing, we don’t have a Priya Varrier story yet. But 2018 has undoubtedly been a year where we have seen more B2B brands leveraging videos for their stories — HP’s The Wolf Web Series created a benchmark last year when it comes to compelling storytelling. B2B brands are now more open to experimenting with long-form content. We have compiled a list of web series and short films released in 2018 below.

Google’s original documentary series ‘Search On’ tells the stories of people on a quest for better answers and the magic that happens when they find them at the intersection of tech and humanity.

The Shiproom is a Web Series that follows Brad Anderson, Corp. Vice President, Microsoft as he has discussions with world’s leading companies on how they navigate the modern workplace, use technology to compete, and how they approach digital transformation.

Tech Today and Tomorrow is a web series that covers emerging technologies like the Internet of Things, AI, Robotics and Cyber Security. Wired Brand Labs has developed the series for DXC Technologies.

HP released the third film in The Wolf Series this October. Christian Slater, returned as the hacker detdetermined demonstrate the importance of printer security, this time facing off against Breaking Bad’s Jonathan Banks and actress Betty Adewole, who appeared in Wonder Woman.
Giant Spoon the agency which worked on the series and had initially planned for three-minute episodes that led up to six-minute films and then a 20-minute cinematic brand film.

Proof of Concept is a video series from Red Hat that shows what happens when UNICEF Innovation engages in an 8-week Open Innovation Labs. The web series showcases how open source can help organisations to innovate.

DXC: The Data Dunk
DXC Technologies partnered with Economist Films to examine how data analytics is changing the way professional basketball in North America is played. The short film showcased how NBA team Houston Rockets is using data to understand player performances and to gain a competitive edge over their rivals.

HPE partnered with Digitas Studios and Atlantic Re:Think to develop the eight-minute film to showcase the ethical concerns that surround AI.

It is interesting to note that this is not the first time HPE has partnered with Atlantic Re:Think. Both the brands partnered in 2017 to develop Eighteen Zeroswhich covers the story of an exascale supercomputer developed for the U.S. Department of Energy.

Facebook: Let’s explain AI with the help of this Dog

Facebook wanted to showcase the potential of AI and how they are using it. They partnered with T Brand Studios (part of New York Times) to explain how artificial intelligence works. This is among the best explainers on AI in 2018.

As marketers, we often get told that the attention spans are dropping, focus on shorter videos however the above examples are contrary to the popular advice. If you have a good story or perspective, don’t ruin it by using traditional formats like PDF’s. It about time you start thinking about how you will bring continuity in your narrative. New formats like Web Series bring the audience back to your channel for more.