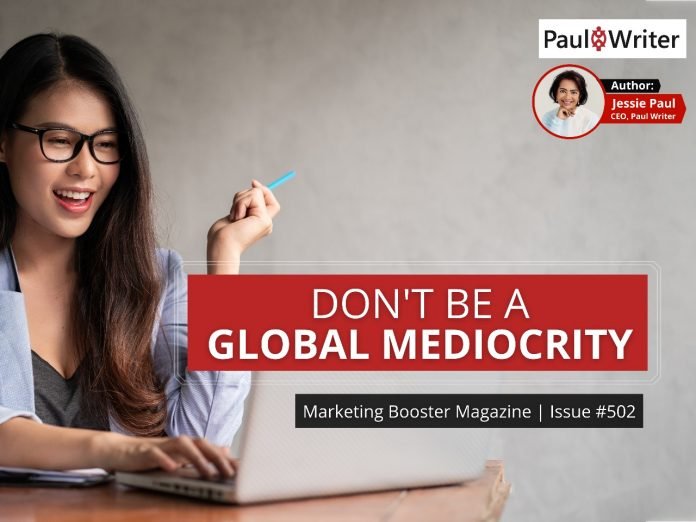 What does mediocre mean?

It actually just means average, good enough.  But in real life we use it to describe people who are a little bit below average, not so good. What makes someone mediocre can’t be precisely defined, but you know it when you see it.

Will you get paid less if you work virtually from a village than if you lived and worked physically in a city?

This was a discussion that arose on my LinkedIn feed based on last week’s newsletter on why I don’t plan to go back to an office, “Hold the Corner Office”. You shouldn’t make less money, if you contribute the same economically. But you might – doing the same job in New York generally pays more than doing it in New Delhi, India.

Trend One: mass elimination of mediocrity.

I went to high school in a small town. I had to travel one hour by rickety bus for coaching for the engineering entrance exams. The coaching wasn’t very good, but it was the best and only available option. There was only one high school in town, and if you wanted extra tuition, you’d end up going to the same teachers. Today, I’d be able to go online and get taught by the best, possibly for free. What happens to the local teacher who was “good enough” but not great?

This is across jobs. A CEO mentioned that thanks to the enforced travel hiatus his sales conversion rate has actually gone up. Why? Because earlier, when physical meetings were the norm, he would travel across the world for the key sales meeting and then leave the closure to his local reps, not all of whom were of equal ability. But now that he can do all the meetings himself his closure rate is up! Your star salespeople can do more sales calls – thereby eliminating many mediocre salespeople.

Folk performers and amateur artistes have declined around the world, because, thanks to the internet you can listen/watch the best from anywhere in the world. Theatre declined when cinemas became popular – why go to a play by local talent when you could watch a superstar for less? The best actors moved to the new, happening, industry – but the others lost out. During the COVID lockdown people who previously paid for a yoga trainer to teach a class in person instead signed up for videos from the global best. Every recorded class you access directly replaces an in-person class by someone else. Just as mass-produced clothes have reduced the market for the local tailor, digitization is going to reduce the market for almost everyone who has a service that can be delivered remotely whether you are a tax planner, financial advisor, tutor, SEO specialist or copywriter. The exceptions will be those who are the global best and can now access a market of millions. And also of course the platforms that make this possible. (The exception is regulated industries where customers are legally prevented from accessing services outside their geography.)

Trend Two: There is a global pool of talent

Since 1998 I’ve been working with the IT services industry, which got its start on the back of labour arbitrage. In the pre-internet days the likes of Infosys figured out how to get work done by talented engineers in India and have it remotely delivered to the US. Till recently the work was done in a physically aggregated space of around 1000 people, which restricted the pool to those willing or able to come to the hubs where these centers are located. But if you make it possible to do the same work sitting anywhere in the world, suddenly the pool expands and there will be a global levelling of pricing based on availability. For example, offering an additional compensation of $10,000 to hire someone in the US might be a 10% jump, but in the Philippines that amount of compensation could translate to doubling that person’s salary.

On my LinkedIn feed there was discussion around whether salaries were linked to cost of living or the business outcome. They ought to be linked to outcome though currently it is a combination of both. But in a world of perfect information and free of flow skills it would trend towards being paid for outcome regardless of where you are. Today we are in a transition phase, so there are still deals to be made whether as a contributor or as a buyer.

Assisted AI can help overcome mediocrity, and make excellence possible for those with reduced skillsets. Take me, I used to get lost even 2 km away from home. But with google maps I’m as good as the next Uber driver. Text editors smooth out the kinks in language. Auto-translate makes it possible to work seamlessly with people around the world. Predictive text drives engagement on LinkedIn.

The skills required to orchestrate the use of AI are not the same as those required to deliver the original requirement. I am a lousy map reader but great at following the instructions on google maps.

The Knowledge of London – a required exam to become a licensed black cab driver in London, was introduced in 1865 and typically takes people 3 to 4 years to pass. Compare this with an Uber driver who with the help of google maps will get you from A to B with no internal knowledge whatsoever.

A combination of these three trends coupled with the flattening of the world – a recurring theme in my upcoming book “Marketing Without Money” – will see a rise in quality even as the average are impacted by a drop in demand for their services.

Have examples that agree/disagree with this hypothesis? Post it in the comments!

Akasa Air got its no objection certificate this week and will take to the skies next year. I ran a poll on LinkedIn asking my community whether Akasa would be profitable and successful or no. With over 400 votes, 63% said yes it will. Some of the comments on the poll are featured below:

“ULCC will always be an attractive option to India with its large middle class population.Secondly, the timing of launch of operations: scientists are looking to declare Covid as endemic to India so 2022 will see far greater domestic travel. Now of course Akasa needs to get routes and operations right but the market is prime to take-up.” – Aruna Iyer

“Beyond doubts Akasa Air will succeed as its mentored by Indian Warren Buffet. Considering the nascent stage of airlines industry, Akasa Air will flourish !!!” – Deepak Naikwadi

Suman Sasmal reminds us of Richard Branson’s famous quote “If you want to be a Millionaire, start with a billion dollars and launch a new airline.”

Join the discussion on LinkedIn.

I have a poll on Tata’s Air India hosted on my member-only platform -it’s free for now – you can vote there https://community.paulwriter.com/posts/will-the-tatas-succeed-in-making-air-india-profitable?utm_source=manual

Which brings us to a question that continues to do the rounds of corporate India:

Why did Jet Airways fail?

I’ll let you read the article – or watch the 1 minute video primer – and draw your own conclusions, but I think that it had to do with a mismatch of pricing to their business model. They forgot one key P.

Disagree? Do write in.

The 4Ps – Product, Price, Promotion and Place, are as relevant for an  individual as they are for a business. Understanding the impact of the other elements on pricing is going to be super important, whether you are employed or in the gig economy. And just like a business, investing in your personal brand will improve your brand premium, loyalty and awareness.

Here are a couple of great reads to get you started: