Home Insights Blogs Is There Such a Thing as Bad Publicity? 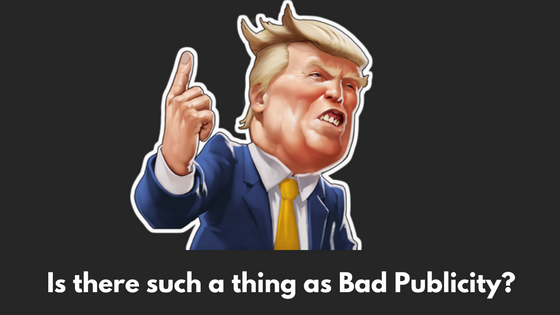 The world was expecting “This election has been rigged” moment but instead USA elected it’s 45th president Donald J Trump. This goes back to the famous movie quote from The Wolf of Wall Street “Any kind of publicity is good publicity”. I recently came across this article by Politico “Trump and the Dark Art of Bad Publicity”.

In one lurid, scandalous month in 1990 he learned a lesson that helped forge his whole candidacy. It’s the Donald-Ivana Trump divorce. He was surrounded by media tabloid covering this whole fiasco while it helped soar his real estate properties.

On being asked the question, he said, “I think there is, but it isn’t an easy thing to measure.”

But the first thing to note while addressing the situation is AIDA marketing model. AIDA stands for Awareness Interest Desire Action

Now apply this logic to Trump’s presidential campaign from a voter’s perspective.

Awareness: Who is Trump?

Interest: What does Trump stand for?

Trump is not a politician, he has maintained that stance since the beginning of his campaign. He has projected himself as a successful business owner who can cut out a deal from any table.

Desire: What is in it for me to vote for Trump?

I’m tired of listening to politicians, and Trump is that alternative who has stumbled, failed & succeeded. He talks my language and eats my favourite burgers too. He is my fellow American!

Action: I voted for Trump.

I want to see the change and governance from a fresh perspective.

It’s important to see that Trump campaign administration followed the rule by book and elected him as the president.

So overall there is nothing called as bad publicity as it helps for call to action!