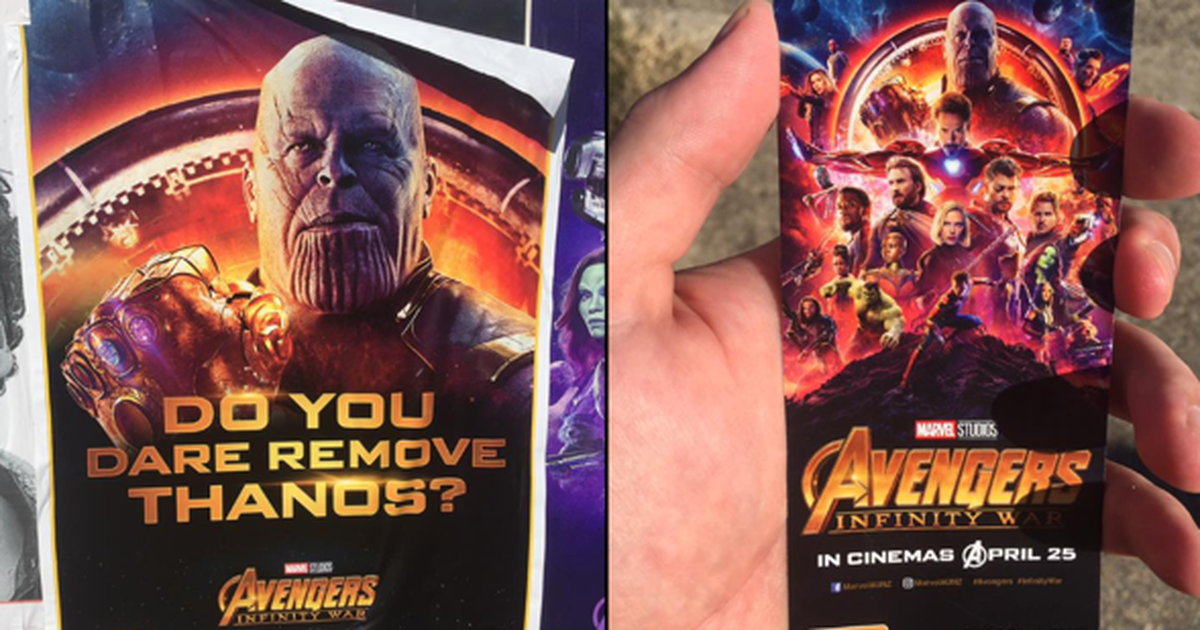 ‘Do You Dare Remove Thanos?’

Lucky you if you did. The ones who did were the lucky few who were rewarded with a free ticket to perhaps the most awaited movie of the decade. Marvel’s poster campaign resembles the golden tickets to Willy Wonka’s chocolate factory and generated enough excitement to work as a well-thought out publicity stunt.

Marvel took their marketing efforts a step further by announcing the release of Avengers: Infinity War a week earlier than the scheduled date. Instead of simply announcing it, Marvel through a humorous interaction with famous Iron Man actor, Robert Downey Jr revealed the change of date. 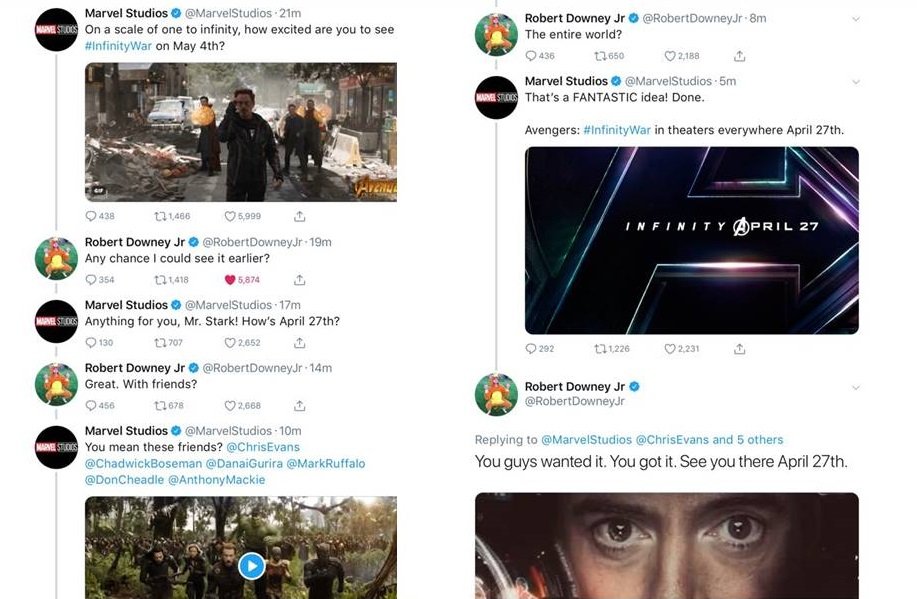 While Marvel is covering all their marketing bases, other brands are milking Infinity War’s explosive popularity to gain visibility by joining their campaign.

Coca-Cola brand Thums Up released their No Sugar variant this April. Teamed with Marvel, Thums Up’s no sugar option featured the Hulk, Iron Man, Black Widow, and Thor on their cans. The campaign will include a TVC featuring the Avengers. One of their other ads featuring Ant-Man and Hulk went viral when it was released. It seems like Coca-Cola knows where to place their bets. 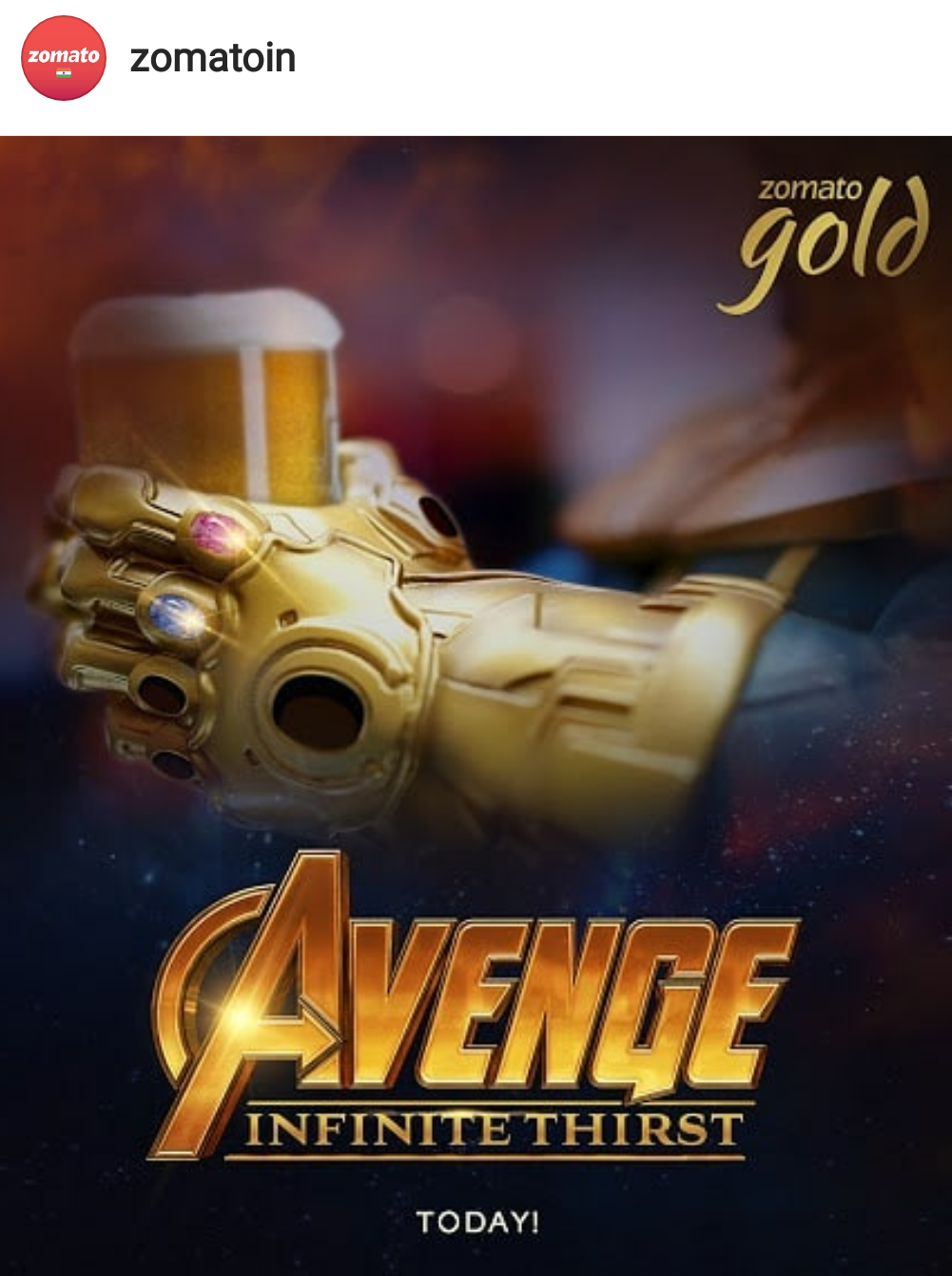 Zomato advertised their Zomato gold membership using the Infinity War backdrop as part of their ad. As of today, the membership is invite-only.

In this ad, you can see Thanos’ hand with his Infinity Gauntlet. The tagline ‘Avenge infinite thirst’ uses the title font of the Marvel movie, Avengers: Infinity War.

This ad certainly has a humorous element to it. There’s something terrible happening in the background that the protagonist does not notice. With her headphones on and her focus on getting a home loan, she’s clearly otherwise occupied. The end of the world (if the trailers are to be believed) doesn’t seem to matter to future home-owners. And look, Dr. Strange even transported her to the happy home experience that Quicken Loans can provide. Looks like the whole world isn’t affected by the battle, probably just America.

Who would say no to the power of Iron Man? And if not the real thing, an interactive AR experience would work too. Hasbro released the Hero Vision app that allows you to have an AR experience as Iron Man. From battling to defending the city, you can do it all.

In this ad featuring the Duracell bunny – who could easily be an Avenger with those flexible moves – the power of a Duracell battery is highlighted. While Duracell can power up Iron Man figurines for up to 15 hours, it’s a good thing Iron Man doesn’t rely on batteries, or wars might have to be paused until he could change them. Brands like American Airlines, Geico, and Infiniti QX50 are some of the other companies who have released ads featuring Infinity War. The highly anticipated OnePlus 6 is also rumored to be taking part in the Marvel marketing campaign.

With actors like Robert Downey Jr, Scarlett Johansson, Chris Hemsworth and many other reputed and famous faces, the Avengers is one of the biggest undertakings of the Marvel Studios. By bringing in the cast of Guardians of the Galaxy, another hit Marvel movie, set mostly in outer space, there’s no question as to why Avengers: Infinity War has been so highly anticipated. Add to that the popularity of the Marvel Universe, the Avengers, and the recent Black Panther movie success, it seems like a profitable decision for brands to invest in Marvel. In the coming weeks, rumor is, more brands will be announcing their affiliation with Marvel Studios.

Brands That Went to War

Go Back To School With Disney And Marvel’s School Essentials