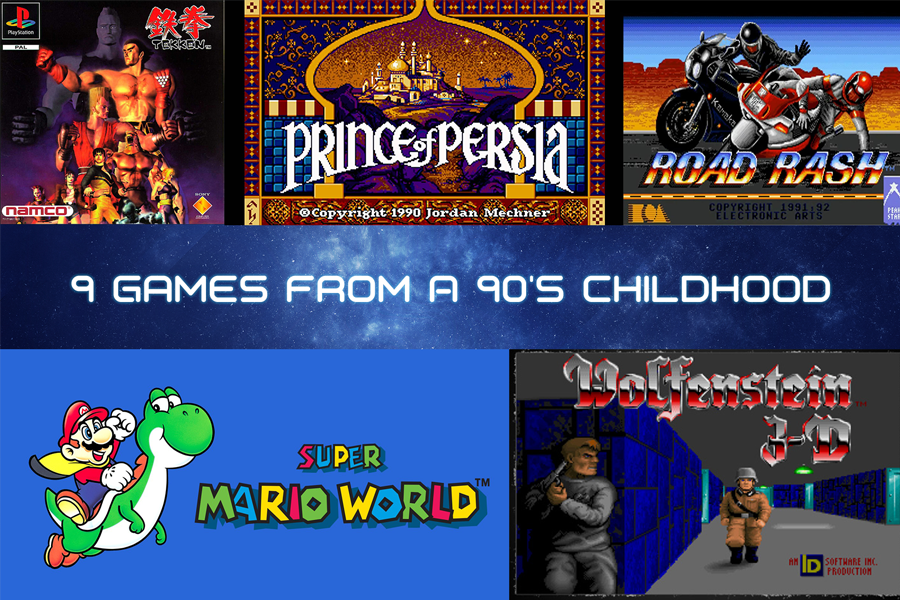 With the release of the Nintendo Switch and rapid developments in VR, gaming is seeing a boom like never before. India in itself is one of the foremost consumers of mobile-based games, according to Forbes, and we host over 250 game companies, with new startups emerging every day.

While the world progresses towards a more tech-involved gaming future, let’s take a look back at the simple PC and console games of the past.

Road Rash was one of the more popular racing games of the 90’s. Participating in illegal street-races where you were allowed to kick opponents off their bikes and had to avoid getting caught by the cops, it was a game we all found a certain thrill in. Accompanied by the gritty graphics and wacky sound effects of the early 90’s, it was a game that anyone with access to a decent computer has played.

Who hasn’t heard of Super Mario? One of the most iconic game characters till date, Mario featured in this game that introduced Yoshi, another beloved Nintendo character. Using the side-scrolling platform of previous games, the player gets to control both Mario and his brother Luigi on a quest to save Princess Toadstool. Since its release, it sold over 20 million copies and was one of the best-selling games on the Super Nintendo Entertainment System (SNES). Tricky puzzles and difficult boss battles gave this game a satisfying replay quality.

The Need for Speed

Racing games were a hit in the 90’s, a fact that can be attested to by The Need for Speed franchise. Similar to Road Rash, the player participates in illegal street racing, but this time, instead of racing on a bike, you rode a fancy car. With each level the track was different, and the player was allowed to choose from a range of high-end cars such as the Lamborghini, Ferrari, and Porsche. Each car had its own pros and cons, though most of us picked the one that could drive the fastest.

Released in 1989, Prince of Persia found its momentum in the early 90’s. The aim of the game was to rescue the hostage princess and defeat the evil Vizier. The player controled an orphan boy along this quest, aided by graphics that were fluid for the time. A major part of the gameplay was avoiding death traps and fending off the guards even as the levels grew increasingly more and more difficult. The game was immersive and thick with suspense, an immediate attraction to anyone playing it. It saw immense success and even spawned a massive franchise that followed after.

Inspired by Super Mario, Dangerous Dave is another game that features hidden levels, collecting rewards, and fighting monsters. While the layout might seem simple at first glance, the puzzles were always harder to solve than they appeared. The player had to navigate levels that kept getting more difficult as they went on, requiring extreme precision and patience to successfully get to the end.

A first-person shooter set during World War II, Wolfenstein 3D is the third installment in the Wolfenstein series. The player runs through different maze-like levels, collecting ammo and guns, and fighting off Nazi soldiers. It popularized the first-person shooter and was seen as an invigorating change to other methods of gameplay. The levels were entertaining and tense, and made for several hours spent trying to find the way out.

The Disney Aladdin game follows the same story of Aladdin as the Disney film released in 1992. The player controls Aladdin and navigates through levels inspired by the movie, avoiding Jafar’s guards and animals. The gameplay is similar to that of Prince of Persia, though the movie adds a certain charm to the game that makes it more unique.

Tetris is a game that everybody has played at least once in their life. The original game was released several times over different platforms, but the version for the Game Boy, released in 1989, was the one that boosted the game. With a simple premise – moving blocks to close empty spaces – the game doesn’t seem like much of a challenge, but each level features faster falling blocks and is extremely addicting.

Tekken was a fighting video game that featured several individual characters with unique abilities that were pit against each other. It was one of the first fighting games of the time, and was revolutionary in that it gave the player control of each individual limb of the character. The goal of the game was to win the martial arts tournament with the selected character. Fighting games are popular even today, and the gameplay of the original Tekken follows through to even the most modern games.

The games from the 90’s set precedents for many of the games that we play today. Innovation in the area of video games was starting to rise and more games were being brought to public interest. Many interesting games were released in the 90’s, and if we’ve left out any of your favourite games from the list, then let us know in the comments!

8 Ads From the 90s because Old is Gold