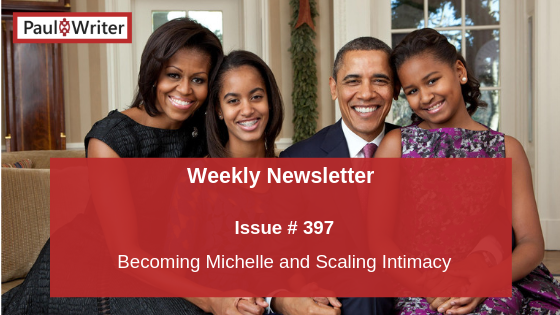 I received “Becoming”, the book by former First Lady, Michelle Obama for Christmas. It turned out to be surprisingly readable and interesting, because it wasn’t as much about herself as about anyone who is a minority, female, not privileged or all of the above. She shares her personal story with a number of intimate details – it feels like a chat with her over a cuppa. No wonder that she’s filling up 20,000-seat venues on her book tour. As Vox puts it, she’s doing “intimacy at scale”.

I was at Hunter Valley a wine-growing region in Australia yesterday and stayed at a 40 year old property. It has two wings named after brothers from a neighbouring winery who died in a helicopter crash. Because they felt like family. This makes this hotel more rooted in its community, and builds a sense of belonging for its guests, too. The region’s famous cellar-door wine tastings make wine-buying far more personal and intimate. (If someone sold me a mango-tasting tour in India I’d probably sign up too!)

We dropped in at Carols in the Domain in Sydney – an open-air free to attend carol-singing session. Woolworths, a local grocery chain, sold “candle bags” for $20 – a hamper with candles to light up for the songs, and an assortment of household goodies, with the proceeds going to the Salvation Army, a charity which works with the homeless. The thousands who were at the park connected with the brand, in a relevant and memorable way. My 9 year old strongly believes that Woolworths is a ‘good’ company and would like to shop there whenever possible.

I have visited the Nilgiris Cake Show in Bangalore a number of times. It’s been running for 44 years now, supported by the Nilgiris retail chain (founded 1905), and since its sale to an MNC, by the new venture of the erstwhile founders. The thousands of visitors get a sense of the brand in a way that ads just cannot replicate.

Now that we have the ability to communicate easily to thousands, the ability to build connect or “intimacy at scale” can be a killer asset, and ensure the longevity of a brand. Many of the brands that make it into our Hot 50 list have shown this ability. If you think your brand should be in the list apply here.

This is true for individuals as much as brands – do we have a real connect with our LinkedIn friends? WhatsApp groups? Neighbours? Once in a while I step out of my box and participate in a new (for me) way to interact with some of my groups, be it a BYOB, Roundtable, or tweetup and I’m always rewarded by the warmth of those personal connects. Not all of us can do intimacy at the scale of Ms Obama, but we can all keep working at it. That’s my 2019 resolution.

I wish you all a year of engagement, fulfillment and purpose. 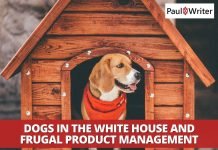 Dogs in the White House and frugal product management 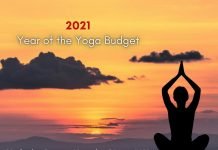 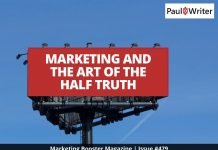 Marketing and the Art of the Half Truth