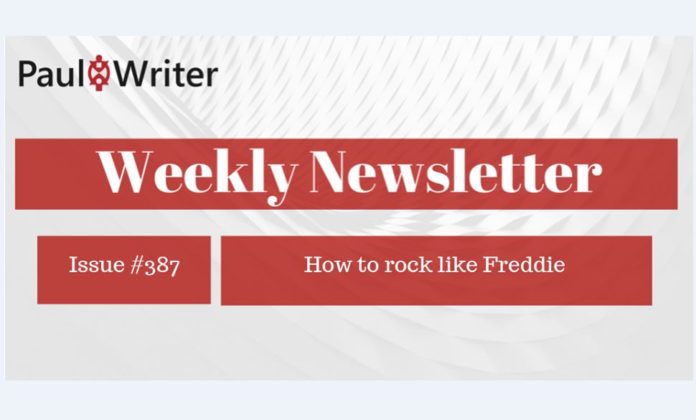 “We are the champions” sang Queen all those years ago.

Yesterday I hosted two sessions on personal branding for a global IT services organisation. And realised how hard it is for us to actually say “I am a champion”. We struggle to fill up “I’m the best at ___”. Sure, most of us are not the best in the world at something, but how about best in our office? Our organisation? Our country? What if we could define our field of expertise a bit differently? Freddie Mercury and Queen created their own style of music and excelled at that.

When the phonograph and later the radio came in the biggest losers were the not-so-good singers, who lost their audience to these newer media which provided even those who lived far away from big towns access to the best musicians. The biggest gainers were the really good musicians who now had access to a global audience. Same thing happened when cinemas came in – the losers were the not so good stage players. With the rise of online education and tuition those who are displaced are again the mediocre.

This is now going to happen to many more jobs with AI. Roles will be displaced or transformed but those who are really good at something will be the ones who train and design these new processes. So it’s pretty important to figure out something that you are uniquely good at. This could be either a mile wide or a mile deep – take your pick, but choose one.

I started my career in advertising with Ogilvy & Mather straight out of B-School. Martin was still Mr Sorrell, and all functions were under one roof. Account managers were supposed to know a little about everything – PR, Printing, Media Buying, Copywriting, Film-making – it was the combination that gave you and your client the edge. 10 years later after stints with a couple of other organisations, I became the Chief Marketing Officer for US$1 billion organisation, Wipro Technologies. While certainly “right-place-right-time’ played a part, I’d like to think that my ability to do a variety of things reasonably well was also a factor. As was, well, my willingness to stake my claim of being a ‘champ’.

Maybe it’s the Asian value system where modesty is considered a virtue, but many of us find it hard to sing our praises even at crucial moments like job interviews and appraisals. One way to overcome that reticence is to think through our value proposition in terms of the two things that matter most to an organisation – increasing revenue or reducing costs, either for the employer or their clients. Most of us focus on the inputs and leave the results for inference – sort of like saying I used good cocoa, butter and sugar with great skill and enthusiasm, but not mentioning that it produced premium chocolate.

Which is why many resumes and LinkedIn profiles end up being frothy blather about commitment, dependability, and enthusiasm. When I joined LinkedIn there were less than 70,000 people there. It wasn’t that hard to stand out. Today there are 500 million (!) users there. Your value proposition needs to be credible, punchy and current, whether it is on LinkedIn or your company’s intranet. Maybe you could take half an hour today to work on your positioning statement – what is the unique value you deliver in business terms. I need to do that too – this is the real joy of a teaching assignment – you come back learning something.

Oh and a tip – the more external validation you have in the form of awards, recognition, speaking engagements and so on the less difficult it will be not just to put this together but to confidently state that you rock.