Indians are often quick in adopting global trends. When selfies became the rage last year, people on this side of the continent caught up fast. It also helped that mid-segment smartphones were the hot selling gadgets in India; last quarter of 2013 saw the highest growth of smartphones in the country. As per a Gartner report, India was the world’s fastest growing smartphone market in Q4, 2013 with smartphone sales increasing by 166.8%. It was also the first time that the smartphone market had overpowered the feature phones market in terms of sales in 2013.

The steep growth of smartphones coupled with various other social factors has led to an increase in the selfie phenomenon in India. From becoming popular to being endorsed by celebrities and politicians, selfies have invaded almost all aspects of our social life.

Smartphones and selfies evolve together

The influx of smartphones in 2013 also saw ‘selfie’ being termed as the‘Word of the year’ by Oxford Dictionaries. Oxford Dictionaries editors revealed that the frequency of the word selfie in the English language had increased by 17,000% since the previous year. Finding its origins in an Australian online forum in 2002, the word gained momentum throughout the English-speaking world in 2013 as it evolved from a social media buzzword to mainstream shorthand for a self-portrait photograph.

A handy smartphone with an essentially front facing camera and a basic data plan, and you were armed to shoot and instantly share your selfie with the world. For the uninitiated, a selfie is nothing but a self photo clicked by oneself through her smartphone or digicam. A few years back, we did it using the timer option in our digicam.

On why selfies have become the greatest photographic trend of our time, neuroscientist James Kilner explains the science behind it. He believes that the reason lies in our new found ability to look at ourselves in the way we want the world to look at us. Selfies have enabled us for the first time to be able to take and retake pictures of ourselves until we can produce an image that comes closer to matching our perception of what we think we look like. 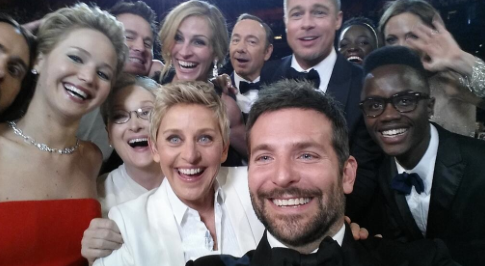 Celebrities all over the world have posted selfies. This year at the 86thAcademy Awards, talk show host, Ellen DeGeneres created history when her selfie with Hollywod celebrities went viral. Ellen’s Oscar selfietweet garnered over 1.1 million retweets within half an hour. It beat President Obama’s selfie record and even caused a temporary Twitter crash.

Brand Modi and others jump in

Back home we had our PM candidate Narendra Modi post a selfie after having voted at the recently concluded Lok Sabha elections, and another selfie with his mother after having won it. In fact he has been posting selfies throughout the election campaign. A whole digital campaign was also run around #SelfieWithModi where fans could upload their photos on to a mosaic site. The hashtag went viral while Modi’s selfie with his mother became the most retweeted selfie in India. 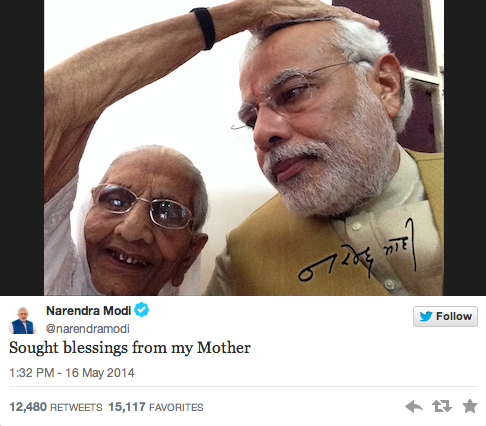 Brands could not afford to be left out; brands wanted to fit in too. They wanted to be a part of our conversations on social media and what better than to host selfie contests. Last year saw brands, especially youth brands experimenting with selfie contests.

Youth fashion brand Fastrack had launched the #WhatsYourFlavour selfie contest for the promotions of its new range of colourful sunglasses for girls. Girls needed to find their favourite pair in the new sunglasses range, click a selfie with it and upload it on Instagram tagging the brand’s Instagram handle along with the hashtags #selfied and #WhatsYourFlavour.

This year the selfie phenomenon has grown to almost every brand in every sector hosting a selfie contest. For one, it is cost effective and another it is easy to instantly share on Facebook, Twitter or Instagram and identified with the help of hashtags.

Late last year whisky brand, McDowell’s Signature had created aSignature Selfies app as part of its 2-month long campaign to engage fashionistas. Bowing to the culture of self-love and self-expression, the mobile app enabled one to share their unique fashionable selfie. A 5-second timer, glam filters to add effects and an airbrush to touch up the photos for a fashion- ready look, along with helpful pro-tips from Fashion Photographer Atul Kasbekar added to its appeal. While there were weekly prizes to be won, the most fashionable selfie won a private portfolio shoot with Atul. 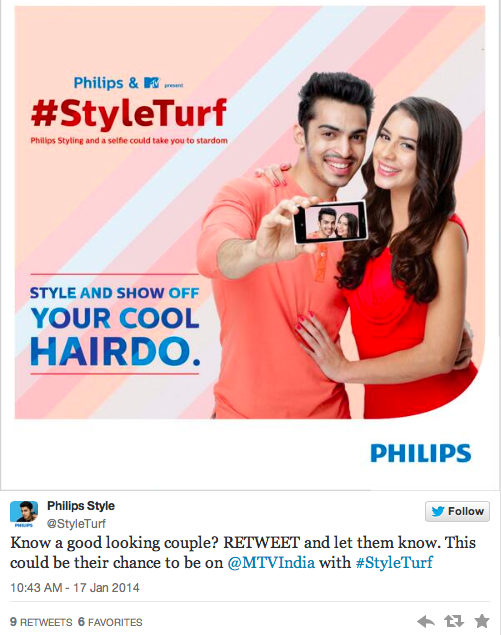 Beginning of this year, personal grooming brand, Philips India teamed up with youth brand, MTV India to bring a one-of-its-kind selfie contest for couples called #StyleTurf. Couples needed to style themselves, click a selfie and share it using the hashtag to qualify for the first round. The most stylish couple selfie won a date to a 5-star hotel and grooming products from Philips, apart from the chance to feature on MTV. The campaign was supported through a microsite and social buzz in addition to offline events to find India’s most stylish couple.

Beauty brand Dove that set a benchmark in the beauty industry 10 years ago when it launched its campaign for real beauty, celebrated the real beauty in every woman this Women’s Day. It invited women to shed their inhibitions, take a selfie and show the world how beautiful they were through the #DoveSelfie contest on social media, a month-long theme-based campaign.

Women were invited to play with their hair, take a selfie of their best hairstyle as per the theme of the day and post it on Facebook, Twitter or Instagram using the hashtag #DoveSelfie. They could also upload selfies multiple times depending on the theme each day. 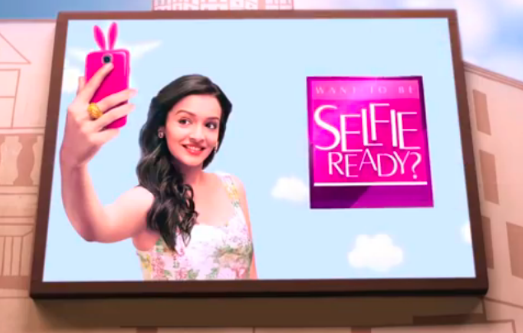 Skin care brand from HUL, Pond’s has been promoting its White Beauty BB+ cream with the #PondsSelfieReady campaign. Girls need to share their selfies using the campaign hashtag on Facebook or Twitter to feature in the online selfie wall of fame. The 30 best selfies will win the chance to feature on a Pond’s billboard across 6 cities, while others won product hampers in the six-week campaign.

Brands have been positively leveraging the power of selfies. Selfie variants are also adding to the brand communication. It is not even the middle of the year, but we’ve seen a variety of selfie campaigns by brands to suit the occasion or their objective.

On the festival of Holi in March this year, quite a few brands rode the selfie wave by asking their fans to share their most colourful holi selfies to win prizes. During the Lok Sabha Elections, mainstream media encouraged voters to click their selfies with the voter mark and share on Twitter using #SelfieForIndia. These were then shared by the media brands on their TV channels or online sites. 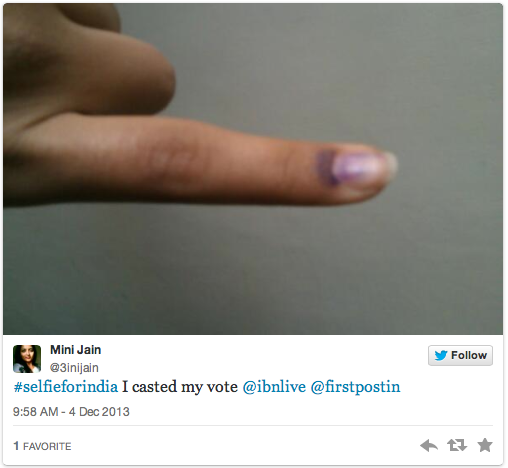 For the ‘Live with Fire’ India campaign by Reebok, the fitness brand invited fans to share their workout selfies, calling it the ‘moment of fire’ selfies to be shared using #LiveWithFire, the brand’s global marketing mantra.

Interestingly, luggage brand Skybags did a twist to the selfie by introducing the concept of a reverse selfie.In a campaign  to promote the brand’s latest backpack collection for the youth, it designed a new communication mantra – Back is the new front’, and launched the reverse selfie contest. Here one had to show off their unique style with their backs facing the camera either with the help of a mirror or getting it clicked by someone. The reverse selfies helped emphasize the new brand mantra of #BackisTheNewFront. 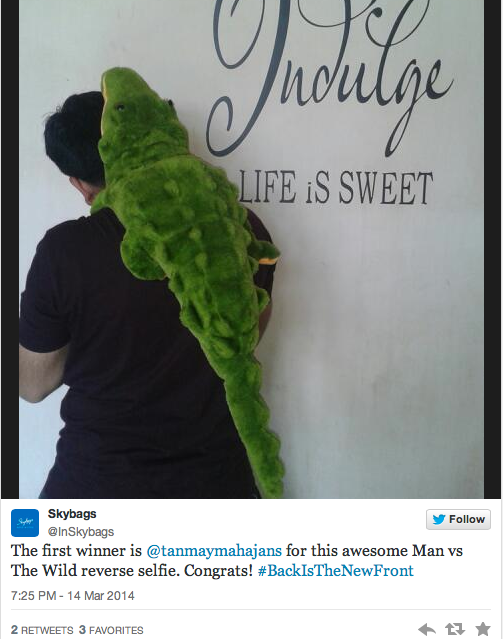 Be it the Modi selfie or the voters’ inked selfies, the selfie bug has bitten almost the whole of India this year. Besides, it is a nation of the young, so the concept is a cool way to connect with the youth – a demographic that strongly believes in sharing every moment with their social connections. However, brands should not overdo it, as it might lead to selfie blindness.

The article is published with permission. Courtesy : Lighthouse Insights