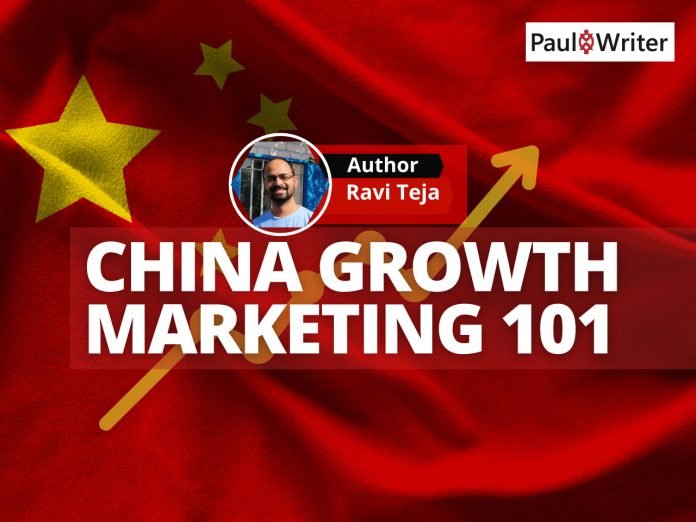 At the turn of the new millennium, China saw many copycat internet businesses from the west, but that soon changed due to innovation that took local challenges and preferences into consideration. China’s economic growth coinciding with the smartphone revolution, led to a strong and diverse App ecosystem, making its growth marketing advanced than any other geography.

In this article, I would highlight the basics of China’s Growth marketing, for people who want to drive growth in China through mobile app marketing or want to learn about China Digital Marketing.  Being a Mobile first market, 85% of the internet advertising spend of $77 billion in 2020 was on App. In fact very few companies have a website in addition to the App. Hence, I would focus only on the App medium here.

China ranks 2nd highest in the world in terms of the number of hours (4 hours) spent on smartphone per person per day. As per CNNIC, China’s internet regulatory authority, the country has 904 million internet users in China at 63% penetration.

India’s top online platforms in terms of Monthly Active Users (MAU) are WhatsApp and YouTube with 459 and 452 Million MAU respectively. In China, there are at least 10 Apps with more MAU compared to WhatsApp India. Here are few of the Apps and their MAUs in millions. 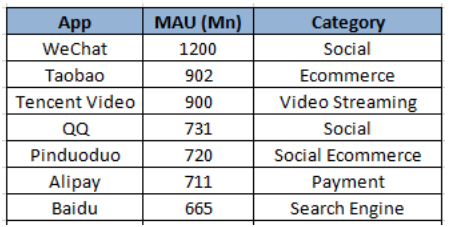 The Daily Active Users (DAU) to MAU ratios for few of the above Apps are upwards of 75% indicating high level of engagement. This engagement combined with a large base of users is the reason why China is the largest digital economy by a huge margin.

WeChat and Alipay are Superapps with their own ecosystems, which I will touch upon in the second part. Taobao, Alibaba’s crown jewel, earns most of its revenue through merchant advertising. Taobao flipped Amazon’s business model over its head, whose primary source of revenue is transaction fee on the goods sold. By charging 0% transaction fee, Taobao encouraged merchants to join the platform and by 2019, it had 8 million active stores and 1 billion product listings on its platform. Amazon Global by the way, has 5 million stores and 350 million products. Once Taobao built traction among merchants and customers, it monetized the platform through CPC (Cost per click) and display advertising.

Tencent, WeChat’s parent, owns Tencent Video and QQ. Only 18% of Tencent’s revenue comes from advertising, more as a byproduct to the quality internet assets it built. Pinduoduo also known as PDD, famous for its Group buy concept, has 70% females as their user base and 65% are from Tier 3 or lower. Through PDD as a medium, marketers can sell coupons to price sensitive users for your product trial. Baidu, Google’s counterpart, the search engine pioneer with high Search Engine Marketing (SEM) focus, is the 3rd biggest Ad publisher in China with 17% market share, lagging behind Alibaba (33%) and Bytedance (23%). Bytedance is the parent company of Tiktok, a short video platform. Tiktok with 600 Million DAU and Kuaishou with 302 Million DAU are fighting an intense war to grab customers’ attention and marketing dollars primarily through in-feed ads.

Apart from the above internet giants including lower tier focused Pinduoduo, China has few large platforms which carved out a niche in the heavily competed space. Xiaohongshu(~100 Million MAU) which is targeted towards young girls who make up to 70% of the users, guides users on the ecommerce product purchase. Then we have Bilibili (202 Million MAU) which is a short video platform building a pop culture community with GenZ users making up 80+% of its user base. Kuaishou has a huge base in Tier 3/ 4 and beyond cities. All the above user segments till recently are ignored by mainstream businesses, but now are the growth engines of the Chinese internet businesses. If the advertisers’ TG broadly matches with any of these niche players, advertisers can partner with selected platforms and finetune marketing efforts for efficiency.

With an early exit in 2010, Google couldn’t dominate the App store market, which led to democratization of App stores in China, where 7 major App stores are vying for top spot for Android devices. In a world of duopoly among App Store and Google Play working on a controversial 70%:30% revenue sharing model generating gross revenue of $110 billion in 2020, cut throat competition in Chinese App store market is an epitome of healthy competition.

Based on the target audience, App genre and business model, you might have to focus on few App stores more than others. It can be an operational challenge to manage your App on multiple App stores. We need to ensure the latest App on all App stores followed by uploading fresh, relatable and contextual content, managing and responding to user queries timely. Any gap in this would quickly result in lower rating and de-prioritization of App in the category, which would eventually hit App’s organic downloads. App store specific issues which need Product team’s intervention are additional challenges.