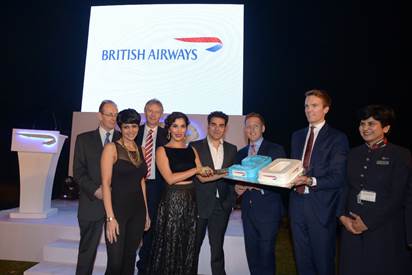 British Airways’ 90 years of rich heritage in India witnessed a grand celebration treating guests with an experience like never before! The airline walked down the memory lane reminiscing the best of music and food, bringing yesteryears back to life.

Speaking on this momentous occasion, Keith Williams, Executive Chairman, British Airways, said, “This year we create another milestone in our history with India. Our anniversary reinforces how we are putting the customer at the heart of everything we do, offering the very best in comfort and luxury on board our flights.

“British Airways has been servicing this market for 90 years and we look forward to our association with India for another 90 years and more.”

Louise Bryce, Head of Partnerships, VisitBritain said, “We at VisitBritain congratulate British Airways on completion of their 90 years flying from India and join them in celebrating the heritage and culture of Britain in the eras gone by. The BA-VB partnership is one of the most valuable collaborations in India through which we showcase contemporary Britain and its regions to the Indian traveller and we celebrate our strengthened ties going forward into the future.”

Taking the experience to a whole new level, British Airways also dedicated a special zone demonstrating the future of air travel. The zone showcased British Airways’ ‘Happiness Blanket’- a revolutionary device that visually shows the wellbeing of a passenger in real time by changing colour to reflect their mood while on-board.

The anniversary underlines British Airways’ position as the longest standing European operator to India with a strong heritage and commitment to the market. British Airways takes great pride in delivering the highest levels of innovative customer service.

British Airways thanks its Indian customers for 90 years of loyalty and is confident in further strengthening its relationship with India for years to come.