Home Insights Blogs 5 Reasons Why That State Bank of India Ad Was Not Such... 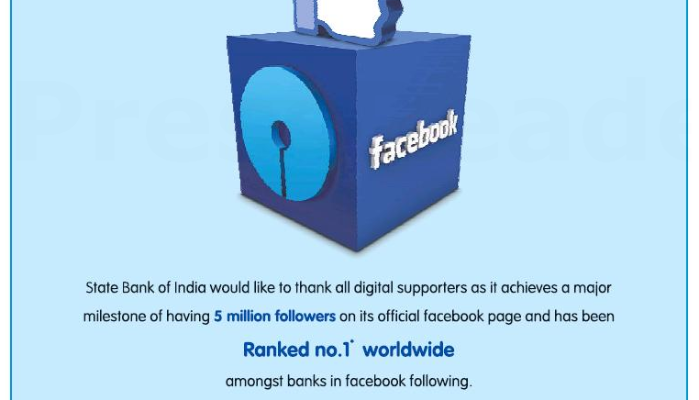 Since that front page ad from State Bank of India appeared in Hindustan Times on March 17th, the Twitter, Facebook and LinkedIn timelines have been buzzing non-stop with commentary. I actively avoided saying anything over something this obvious, in the beginning, but eventually, when an adequate number of people tagged me in conversations, I couldn’t keep quiet.

I agree – this is a waste of money. To spend money for a front page ad (costing crores) to talk of something as vacuous as Facebook Likes? C’mon, this is 2016! After all, we had a very good laugh when Jet Airways did a press release back in 2012 to announce their million fans on Facebook.

So there – if I was in SBI, and asked if we can release an ad like this, I would have asked them not to.

But, I’m not in SBI. Hence, I have the liberty to think for the opposite side – the one that is not me – as well! So, here are 5 reasons why that SBI ad was not such a bad idea after all!

1. How many people even know that Facebook Likes are ‘bought’? My parents still don’t fully understand how public relations works, let alone Facebook Like buying. Beyond an echo-chamber of digital and social media marketers, this ad may just not be questioned at all. In fact, many senior marketers may ask their social media agencies why they cannot pull off for them what SBI’s agency pulled off, with whatever – money, good content, being responsive etc. To get something visibly BIG and get a tick mark in their KPIs.

2. At a time when marketers seek ‘viral’ videos and ‘trending’ hashtags as part of agency KPIs, why is this ad even being seen with derision? I have written very recently about trending being an orchestration – not some organic goodness that drops from the sky. If we can crow about trending hashtags, why make fun of a 5 million milestone? If you see the list from the source, The Financial Brand (2015Q1, Q2, Q3, Q4), it shows that SBI has overtaken many international banks for this ‘achievement’.

3. There is a quarter-page ad by Yes Bank in The Times of India today, in the business page. It is for Yes Bank’s CSR effort and the claim to fame is a number – ‘over 2 crores’.

So, 2 crore+ people benefited from Yes Bank’s CSR efforts. This is an offline number, unlike Facebook Likes that is digital and hence supposedly more verifiable. But the nature of Facebook Likes is not as black or white as we’d like to believe. It is muddled. As much as Twitter followers (for which there are fake follower checkers, that approximately give you a % of your brand’s followers that are bots or fakes). But, if we can take 2 crore+ as a number worth crowing about in a print ad, why question 5 million Likes that is perhaps easier to check by simply going to the brand Facebook page. If we start digging the data behind the number–allow me to indulge in some whataboutery, please–what about the 2 crore+ number? Let us start digging that too.

4. Here’s a print ad (half page!) by Parachute Advansed. It says that people who use Parachute Advansed have the world’s ‘best hair’. Deepika Padukone endorses this ad, released in 2012. I have blogged about this since the fine print for the claim and the brand website’s explanation of how they arrived at this incredible claim made me go around in circles. So, ‘world’s best hair’ with no valid source is good for an ad and nobody will question it (except me and my blog post, of course), but 5 million Facebook fans will be questioned?

5. For the 5th hypothetical counter-argument, I’d like to hypothetically and respectfully disagree with Anant Rangaswami. Anant, in his weekly piece in The Hindu says,

State Bank of India getting it horribly wrong, releasing a front page ad in major newspapers across the country congratulating itself for crossing “Five million fans on the SBI Facebook page”. First, Facebook doesn’t record ‘fans’. What SBI can truthfully claim is that it has five million likes for the page. Second, if the bank truly believed that it has five million fans, why on earth waste budgets advertising in expensive print publications? And finally, and this is perplexing, why hasn’t SBI announced this ‘achievement’ on their own Facebook page?

On the first point, I think that’s a pedantic argument. Facebook Fans, Likes, Twitter followers, fans, army etc. are assorted ways to refer to people who have clicked on some form of ‘follow’ allowed by social media networks. SBI ad does not use the word ‘fans’ even once, incidentally. It merely says, ‘5 million followers and counting’ and ‘…major milestone of having 5 million followers on its official Facebook page’. This is a factual statement and is hardly misleading in any way.

On the question of wasting ad budget, again, SBI did not claim they are fans. They are ‘followers’. And followers need not be clued into all the brands they follow all the time. We’re living in times of information overload. A follow doesn’t mean people are all ears all the time, every time. It merely means they liked one/few pieces of content at some point in time and assumed that they like the brand enough to click on Like. The very reason Facebook, Twitter and Instagram are constantly tweaking their algorithm is because not everyone sees every piece of content from every brand they have liked. So, the intent of this ad could be, ‘Hey people reading the front page of Hindustan Times! Look – we are the first bank across the world to have 5 million followers on Facebook. That makes us pretty popular, right? Bye… now go to the front page for news’.

It is a simple act of chest-thumping. Does it mandate a front page? Perhaps not. But then, which other bank has a 5 million follower mark on Facebook? Anywhere in the world? No one? Of course not. Then, it does seem like a not-so-bad idea after all, huh? In any case, it is not as if SBI is not responsive on Facebook – take a look at the comments/queries under each post and the brand’s reactions, replies. Yes, the content could be less boring and pushy, I agree, but that’s a different topic altogether.

Disclosure: SBI is not a client. I have never ever worked with SBI as a client in my career. I do not have a bank account or a bank locker with SBI either. The closest connection I have with SBI is that my father-in-law was a SBI lifer. He is no more, to see his son-in-law arguing both for and against the bank.