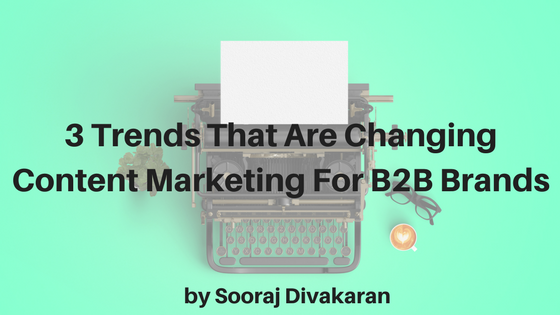 Content marketers only get a little help these days with a publishing calendar that gets updated every few hours to a new breaking story that floods your timeline. We are churning out more content than ever, and every user with a mobile phone can be a potential publisher.

In between all the noise, the purpose of why you are doing what you are doing gets lost. Content marketing for B2B has changed drastically over the last few years due to the emergence of mobile and newer technologies that have come into play. While content marketers can blame the problem of plenty (too much content) and lack of budgets the fact that in spite of all the hurdles there are brands that are doing extraordinary work. We have identified three trends that are shaping the future of content marketing for B2B brands.

SHIFTING FOCUS TO THE ABSENCE OF PRODUCT/SERVICE
Snips is a small machine learning start-up set out of New York. Set up in 2013 as a research lab the company today is building an artificial intelligence platform for voice-enabled devices. Last year the company’s effort to simplify what artificial intelligence means made headlines with leading technology sites. On the face of it, it seems like a simple idea, but it’s not it.

Most startups & brands working on artificial intelligence based platforms or frameworks develop their content considering a chief technology officer or decision maker higher up the ladder. Snips campaign to explain artificial intelligence in six minutes was incredibly simple and well-crafted to keep the viewers hooked. In fact, Bryan Clark from The Next Web wrote “I read about AI daily, and there’s plenty I didn’t know. Everyone will get something from their 6 minutes spent at Snips, and since it’s free, there’s really no excuse not to give it a look.”

“I read about AI daily, and there’s plenty I didn’t know. Everyone will get something from their 6 minutes spent at Snips, and since it’s free, there’s really no excuse not to give it a look.” – Bryan Clark, The Next Web

Now six minutes might go against the conventional wisdom that most B2B marketers work with today. But Snips story clearly proves that marketers should stop treating their consumers as goldfish. Snips addressed a complex issue like artificial intelligence and made it incredibly easy for even a layperson to understand. As for results, the microsite received over 100+ backlinks from leading technology and news sites.

Snips is among the list of few B2B marketers who are approaching content marketing differently. Content marketing, in essence, should aim to educate or address a complex issue while keeping the users engaged. Content marketing should focus on the absence of the product/service and instead flip the narrative to address what the consumer needs or aspires. In Snips case, they wanted people to understand what artificial intelligence means, and if in the process people perceive them to be an expert in the domain then their purpose is served.

STOPPING TREATING YOUR CUSTOMERS LIKE GOLDFISH
HP launched its film series titled ‘The Wolf’ in February this year. The film series starring Christian Slater uses a theatrical approach and has been developed jointly by HP Studios the brand’s newly launched in-house content studio and agency Giant Spoon. The Wolf showcases what happens if companies don’t secure their printers.
The video uploaded on YouTube with a run time of 6 minutes and 22 seconds has generated over 2.02 million views so far. The Wolf from HP Studios was declared as a winner in DigiDay Content Marketing Award for Best Video Series. The Slater starring campaign will develop over the year and focus on different areas of hacking.

With so much noise around, it makes sense for B2B marketing to grab attention and use non-conventional methods to reach an audience. More B2B brands are experimenting with long-form video content including the likes of IBM, Maersk, RedHat and more.

The interesting bit about working with long-form video content is that you can work with the traditional content arc which starts with the beginning, middle and the end and yet have the viewers engaged. Film series crafted in the form of episodic content also tend to gain more viewership over time compared to shorter videos with 2-3-minute run time.

FROM STATIC TO INTERACTIVE & IMMERSIVE FORMS
General Electric back in 2015 was working on ways in which they can talk to people about the work they were doing in areas like the industrial internet, energy, healthcare, manufacturing and from GE Reports (the brand’s content hub with 3,00,000 subscribers). GE decided to partner with Quartz (part of Atlantic Media) to develop an interactive graphic called the ‘World in Motion.’ The site holds 240 pieces of content and gets updated dynamically every day allowing users to read the latest innovations from GE. Speaking on the launch Jason Hill, GE’s global director of media and content strategy said “Really great, engaging content takes people behind the logo and allows us to explain how we are changing the world.”

GE World in Motion and Quartz from Sharon MacNair on Vimeo.

The story signifies a move from static to dynamic content that doesn’t lose relevance at the same time has built in interactivity, unlike a PDF which is static. Interactivity is not just limited to infographics; brands are experimenting with newer forms of technologies like WebGL, augmented reality, virtual reality, 360-degree videos and more.

Lockheed Martin built an immersive experience for its STEM (Science, Technology, Engineering & Math) program last year using virtual reality. The idea was to bring the science of space to students across America and inspire them to be innovators & explorers. The brand designed a real-life Mars experience bus that replicates the surface of Mars. The campaign was voted as the best use of emerging technology by IAB UK last year.

Space 10 is a start-up that describes itself as a future-living lab wanted to conduct a survey on how people feel about artificial intelligence it didn’t go the conventional route of deploying a research agency or using Survey Monkey instead they created a microsite explaining to people what they intended to do with the data from research. The micro-site titled ‘Do you speak human’ doesn’t have a form that people have to fill instead chat-bot like interface that requires you to have a conversation instead to complete the survey. At first thought, this might not seem to be a novel idea, but if you probe deeper its playful, engaging and interactive.
All the above stories are coming from B2B brands that are striving hard to do things differently. Even something as simple as conducting a survey can be done in a playful and immersive manner. If brands have to move beyond the conventional, they have to think immersive and bring in affordance. Like they say there are no boring brands, there are just boring stories.